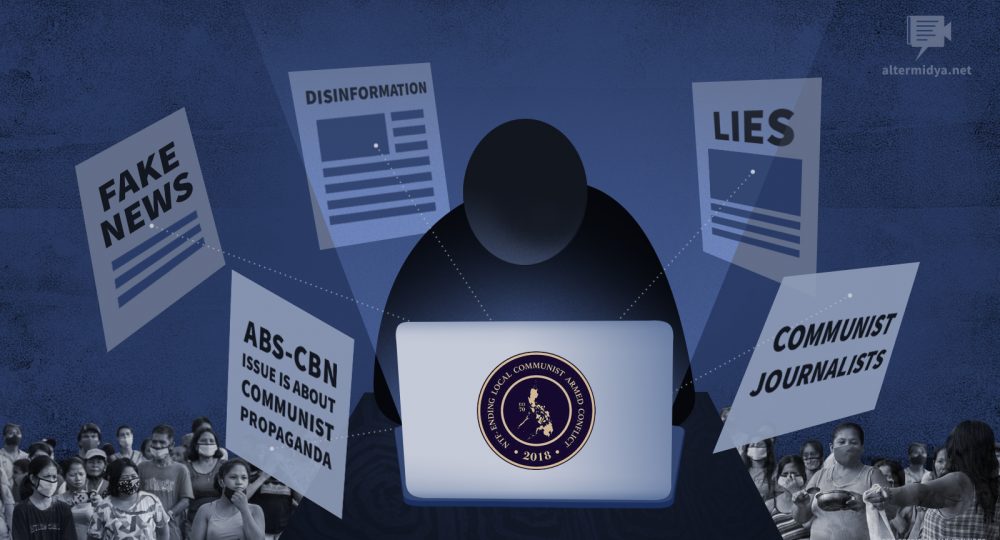 JOINT STATEMENT (with updated signatures as of 9pm, May 16)

The statement came after the brouhaha ignited by the recent cross-posting in several official government social media accounts of false information about the ABS-CBN issue.

Despite the fact that the NTF ELCAC got burned by the Palace when Communications Sec. Martin Andanar admitted that the cross-posting of NTF ELCAC’s infographics on ABS-CBN did not undergo the “usual vetting procedures,” Parlade persisted in linking the ABS-CBN issue to the CPP.

Under different circumstances, we could have dismissed Parlade’s red-baiting statement. But the reality is that journalists are being harassed, arrested, and killed under the pretext of counter-insurgency.

In a futile attempt to blindside the alternative media, Parlade directly mentioned the Altermidya Network and its members including Bulatlat, Kodao, Tudla, Kilab, Northern Dispatch, and even the formations National Union of Journalists of the Philippines, Union of Journalists of the Philippines (UJP), and the College Editors Guild of the Philippines, labelling all these groups as “creations of the CPP.” The general also labeled veteran journalist Inday Espina-Varona as a “long-time cohort” of the CPP and dared her to “expose herself some more.”

There is nothing new in this attack. Keen observers of the increasingly deteriorating state of press freedom in the country were not surprised. In the context of the Duterte administration’s weaponizing the public health emergency to further its goal of controlling information and public opinion, Parlade’s use of the ABS-CBN issue is just one more demonstration of its determination to silence dissent and free expression.

At a time when millions are standing up and speaking out about the abuses of the Duterte administration, state agents respond with a patently unconstitutional crackdown on the media sector.

Parlade’s empty accusations should not deter the media from reporting the truth. Rather they should continue to monitor and hold government to account despite its concerted efforts to silence them.