Home›Network›Lorenzana’s cancellation of accord a threat to human rights, says UP Min community 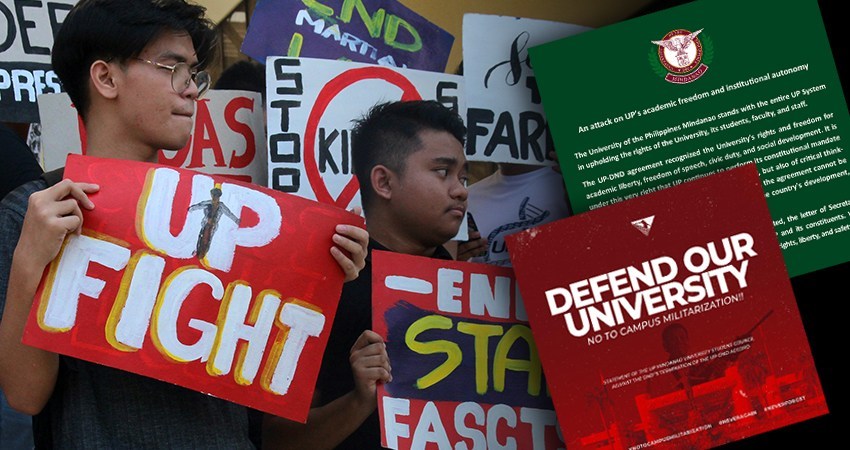 Lorenzana’s cancellation of accord a threat to human rights, says UP Min community

DAVAO CITY, Philippines — The University of Philippines Mindanao (UPMin) administration, student council and student publication joined the UP community in condemning the termination of an agreement with the government that restricts military and police personnel within the UP campuses.

Lorenzana said that termination aims to “provide effective security, safety and welfare” of the students, faculty, and employee” due to “ongoing clandestine recruitment” of the Communist Party of the Philippines-New People’s Army (CPP-NPA) inside UP campuses nationwide.

But the UPMin Student Council stressed that the termination “endangers” the students’ right to free speech and academic freedom.

Last year, UP opened itself to demonstrations organized by groups amid lockdowns in protest of the Anti-Terror Law, and rallies commemorating Labor Day, Independence Day and SONA 2020.

The UP Mindanao administration, in a statement, said the agreement cannot be unilaterally terminated, which was also echoed by other administrations and lawyers who point out that agreements must be mutually agreed by both sides to be cancelled.

“While the agreement cannot be unilaterally terminated, the letter of Sec. Lorenzana poses a threat intended to intimidate UP and its constituents. We, therefore, join the entire community in defending our rights, liberty, and safety,” their statement read.

The UPMin USC scoffed at the DND’s statement that it does not intend to station military or police inside UP campuses nor suppressing activist groups, academic freedom, and freedom of expression, calling it “empty promises and a hypocritical lie”. It noted the violent dispersal, and arrest on student activists who joined last year’s rally against the passage of Anti-Terrorism Law within UP Cebu grounds, as well as existence of RCDG (Regional Community Defense Group) Training Grounds and police outpost in UP Mindanao.

“The DND’s statement on ‘wanting us to see the Armed Forces and Police as protectors worthy of trust, not fear’, all while they commit injustices, police brutality, extrajudicial killings, and worst of all, red-tagging and false accusations is a blatant lie, and does not intend to uphold their mandate of serving the masses and the common good,” the USC added.

The Anti-Terrorism Council recently designated the CPP-NPA as a terrorist group under the Anti-Terrorism Law of 2020 (ATL). Critics and activists have earlier warned that the law, with its overreaching powers, will only be used to crackdown on dissent and opposition.

The DND-UP Accord was signed in 1989 by UP President Jose Abueva and then Defense Secretary Fidel Ramos which set guidelines on military and police operations within the UP System. This was crafted after the arrest of Philippine Collegian staff Donato Continente, who was taken by authorities in the Collegian Office and was detained for 14 years on the alleged murder of a US serviceman.

The UP-DND Accord is “a significant victory for the UP community as it guarantees a safe space to exercise freedom of thought, expression, and education” according to the UPMin Student Council, which called on the UP administration to defend academic freedom and protect its constituents. Ken E. Cagula/davaotoday.com