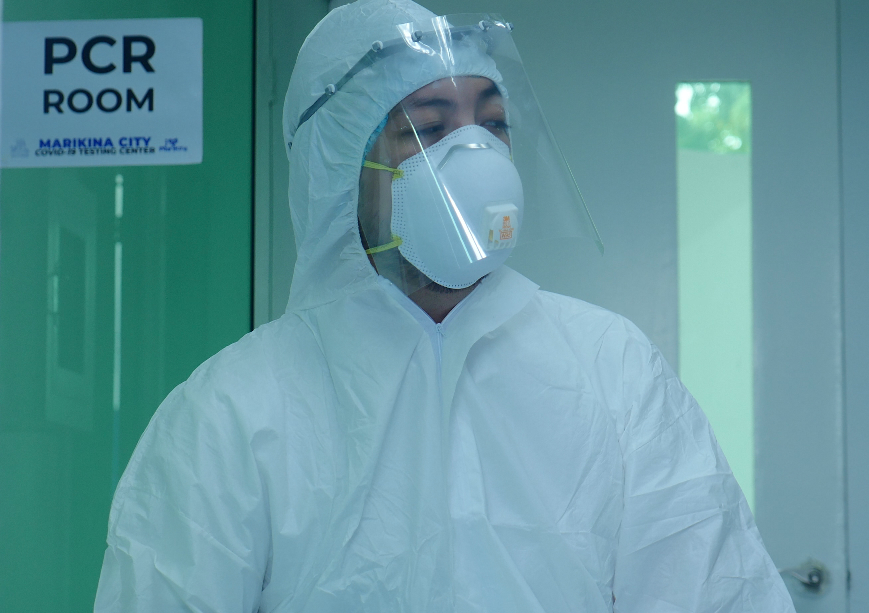 As the easing of movement restrictions begins in some parts of the country, many Filipinos remain unsure about the real extent of the spread of COVID-19, and anxious about the government’s capacity to control it. Has the government used the past two months of a nationwide lockdown to not only “flatten the curve” (or stem the growth of COVID-19 cases) but also to “raise the bar” of the public health system so that it can effectively deal with the pandemic? Analysis of official data, expert opinion, as well as reports from frontline health workers, indicate that it has not.

Have we ‘flattened the curve’?

In a May 5 press briefing, the Department of Health (DOH) claimed that the Philippines is starting to “flatten the curve” due to the slowing down of the speed of COVID-19 transmission: from a doubling rate of less than three days, cases are now doubling every four to five days.

However, according to Math professor Felix Muga of the Ateneo de Manila University, while it’s true that the rate of growth in cases has slowed down, daily case incidences are still generally on the rise, citing a graph that shows the 5-day moving average of recorded cases. 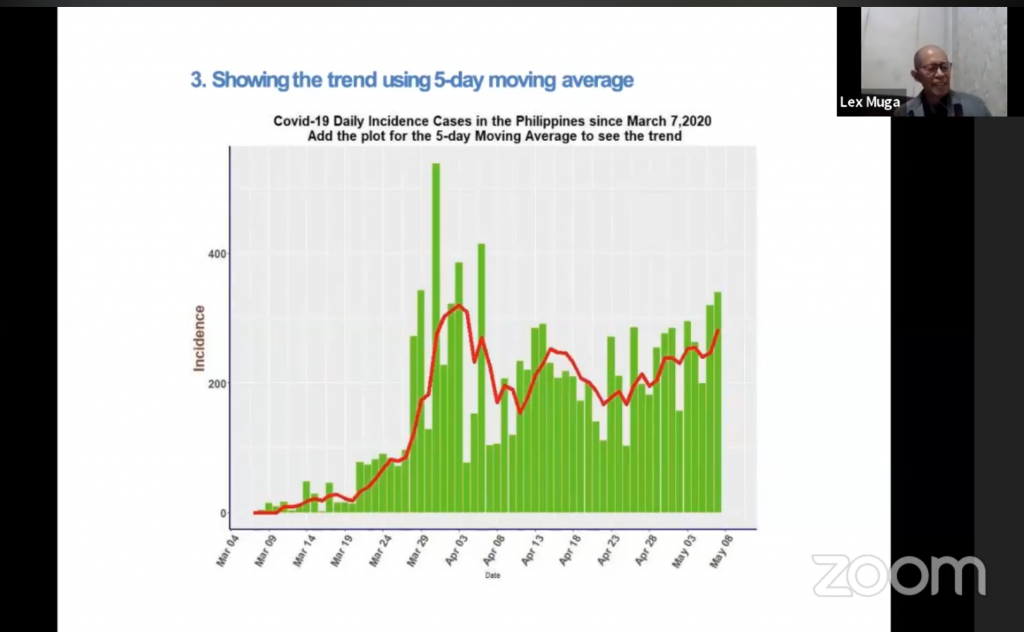 He added that the reproduction number still hovers above one: this means that one infected person will likely infect one more person. Muga said in order to claim that we have flattened the curve, “the reproduction rate should be below one or closer to zero,” he said in a May 8 press briefing.

Experts also point out the huge backlog in the validation of cases, which have been continually increasing. As of May 10, there were 4,187 cases that have not yet been validated by the DOH.

“The massive testing backlog prevents us from knowing the real state of COVID-19 in the country,” Joshua Danac, a UP molecular biologist and representative of Scientists Unite Against COVID-19, an alliance of concerned scientists and citizens calling for free mass testing in the Philippines, said in a May 12 press briefing. He pointed out that the huge geographical disparities in the concentration of recorded COVID-19 cases reveal that the official numbers may just reflect access to testing, and not the real number of infections.

“Did we flatten the curve or did we just reach the limit our testing capacity?” Danac asked.

On May 11, DOH announced that 8,314 COVID-19 tests were conducted that day, higher than the average 5,863 daily tests conducted from May 2 to 6. However, the DOH has not yet reached the 10,000 tests per day that it targeted for the end of April—raising doubts over its ability to reach its target of 30,000 tests per day by the end of May.

Only 131,786 individuals, or roughly 0.1% of total population, have been tested as of May 6, placing the Philippines as among the countries with the lowest number of COVID-19 tests in the ASEAN region.

This is because the government has not significantly ramped up its testing capacity over the last two months. There are still only 26 licensed RT-PCR laboratories, or labs capable of COVID-19 testing. Most of them are located in the National Capital Region.

According to Danac, testing capacity is not maximized because there are not enough supplies and not enough personnel like medical technicians and molecular biologists to run the test labs. He added that there is slow accreditation of additional labs.

“The government should simplify and speed up its process of accrediting testing laboratories,” Danac said. “It should assist in setting up more centers rather than just demanding them to adhere to the requirements.”

“There are many requirements. Sometimes, they are just bureaucratic, like notarized documents. The more challenging are the technical requirements—but this all the more reason for the DOH to step in,” he said, stressing that there must be clear central coordination and technical guidance from the agency, as well as centralized procurement efforts for crucial testing supplies for each laboratory.

Moreover, major testing centers like the Lung Center of the Philippines and Research Institute for Tropical Medicine (RITM) have been scaling down their operations and are forced to receive fewer samples because of the lack of supplies and personnel, Danac said.

“We highly doubt that we can increase testing significantly in the next two weeks. We must remember that the exit strategy from this lockdown will only work if we improve our testing capacity,” he added.

Meanwhile, Dr. Julie Caguiat, spokersperson of Cure Covid (Citizens Urgent Response to End COVID-19), pointed out that unless the DOH starts to test asymptomatic patients, “we will never get the real picture of the spread of the disease.” Currently, the DOH only conducts test on patients exhibiting symptoms (excluding vulnerable populations and health workers).

“And we should remember that there are still other medical steps to address after testing,” she said, emphasizing that government also still needs to identify and establish quarantine centers for each city where patients will be isolated and eventually treated.

Health advocates point out that even before COVID-19, the public health system has already been grossly neglected and overburdened. It is estimated that there is only one doctor for every 20,000 individuals, and one nurse for every 80,000 individuals. Has the epidemic finally redirected resources towards public health?

Not quite. Earlier into the crisis, the DOH faced intense backlash for offering health workers an allowance of P500 per day, or less than the minimum wage, for serving on the COVID-19 frontlines. As of May 7, the agency reported to Congress that it has hired only 968 human resources for health—less than one-third of the positions that it has approved for filling up. A vast majority of these personnel or 79% is also assigned in the NCR, raising the question of how capacity is being beefed up in the other regions, in which more than one-third of COVID-19 cases are found.

“Even before COVID-19, we have been demanding that the DOH permanently hire 17,000 nurses and doctors for permanent plantilla positions. That remains our demand, made even more urgent by the crisis,” said Caguiat. The group had also previously stated that COVID-19-specific hospitals exclusively need an additional 6,000 nurses.

A nationwide survey of 457 health workers conducted by Cure Covid—the first of its kind to solicit the opinion of frontliners on the government’s response—seems to confirm public fears that the health system is not fully equipped to deal with the pandemic.

Two-thirds of respondents believed that there is a “severe lack” of doctors, nurses and other health personnel in their respective health facilities. Severe lack is defined as less than 50% of the needed number of personnel. Almost 75 percent of respondents are public health workers.

The survey also revealed that more than half of respondents reported severe or moderate shortage of supplies, especially for N95 masks, COVID-19 testing kits, mechanical ventilators and isolation quarters. The shortages are more felt more in national government and LGU hospitals.

In contrast, the DOH reports a seeming underutilization of COVID-19 health facilities, both public and private. As of May 7, it reported 12,430 dedicated beds for COVID-19, with a 40.77% occupancy rate, and 1,937 mechanical ventilators, of which 77.7% are available.

However, Caguiat explained that such data should be taken with a grain of salt. “There are many interweaving factors involved in critical care. In my experience, even if you have an ICU unit, but if you don’t have the right personnel (specialists), it will not be utilized,” she said.

She added that the prohibitive costs of health care, especially private health care, can be another reason behind the seeming underutilization of COVID-19 facilities. Philhealth will only cover a portion of health expenses of patients that are confirmed COVID-19 cases—under new case rates it implemented starting April 15, this ranges from P43,997 to P786,384.

“Even before COVID-19, six out of 10 Filipinos die without seeing a doctor. What more during a pandemic?” Caguiat said.

Comparative data as of May 12 reveals that with the Philippines’ COVID-19 fatality rate— currently at 6.62%— the country has the highest number of COVID-19 deaths relative to the population among ASEAN countries. It is averaging 7 deaths per 1 million population, almost double the rate of runners-up Singapore and Indonesia, which each averages 4 deaths per 1 million.

Philippines also has among the highest rate of infection among frontline health workers in the world—almost 20%, compared to the world average of 2-3%. This has caused even the World Health Organization to sound the alarm.

According to Dr. Gene Nisperos, associate professor at the the UP College of Medicine and executive director of Community Medicine and Development Foundation, the DOH has demonstrated its “weak leadership” by allowing the Duterte administration to exercise an overwhelmingly militarist approach to the epidemic.

“Health workers were already being apprehended at checkpoints, a mentally challenged man was already shot dead, and yet they said nothing. They only spoke up to clarify to soldiers that a physician is the same as a doctor,” he said in a recent webinar.

Nisperos expressed fears that even if the country transitions to general community quarantine, the militarist approach will remain and efforts to “raise the bar” of the public health system will remain wanting.

Meanwhile, economist Sonny Africa of IBON Foundation pointed out that because of the COVID-19 pandemic, governments are making interventions on the economy like never before—an opportunity, he said, to beef up sectors and industries that have long been undermined by “free market” forces. This includes the public health system and local manufacturing, which can be mobilized, for instance, to produce protective and health equipment.

“This pandemic is really an opportunity to strengthen the public health system. And yet the government has so far not used it to do so. Which begs the questions—for whom, and for what have their actions been?”