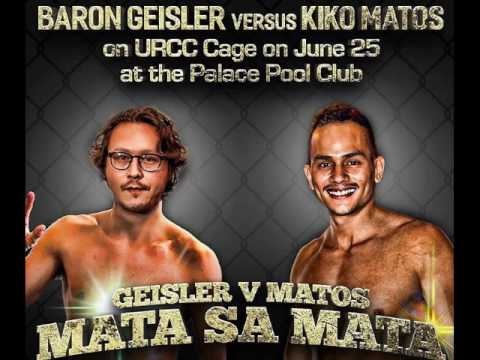 This year’s most awaited mixed martial arts (MMA) match in the country is not between two renowned athletes. After their brawl video went viral, actors Baron Geisler and Kiko Matos accepted the Universal Reality Combat Championship’s (URCC) offer to settle their private dispute in the MMA ring on Saturday.

But what is unknown to many is that the fight, which costs P1,200 per viewing ticket, is also a benefit event. In a press briefing, Geisler said all the proceeds of their match “Fight Night I” will go to the bail for political prisoner Maricon ‘Eedom’ Montajes. Their brawl video was recorded in an earlier fundraising event for the same cause.

Montajes’ mother Maria Concepcion, who is in Davao, said while she is thankful, she hopes that the MMA fight would raise talks on the ongoing peace process and the condition of political prisoners.

(It will be big help if they would indeed donate. Tell them thank you. I hope they can raise this to a discussion of the peace talks. I hope for every punch that will land on their bodies, they will think of the pain of every one wishing for genuine and lasting peace. If they have time, they should also visit her so they can learn the conditions inside prison. I give my heartfelt thanks.)

The Government of the Philippines (GPH) and the National Democratic Front (NDF) agreed to formally resume peace negotiations on June 16. Peace advocates welcomed their agenda which included the possibility of granting general amnesty for all political prisoners.

Since Maricon’s arrest in 2010, her relatives, schoolmates and supporters have been creating clamor for her release through Task Force FrEEDOM. The group has organized commemoration concerts and jail visits for Maricon and other political prisoners.

Twenty-six-year-old Maricon Montajes is one of the youngest political detainees in the country. Prior to her arrest, she was taking up Film and Audio Visual Arts in UP Diliman.

Maricon became a student rights activist and joined UP Sining at Lipunan (UP SILIP). A year later, she decided to take a leave from her studies and live with the peasant community to study their plight in the countryside.

On June 3, 2010 at Bgy. Mabayabas, Taysan, Batangas, members of the 743rd squadron of the Philippine Air Force who were conducting military operations at the time surrounded a house where she was staying and peppered it with bullets.

Maricon suffered injuries during the incident. The military arrested her together with Anakbayan member Cañete and farmer Baez. The three were charged with trumped-up cases of frustrated murder and homicide, illegal possession of firearms and violation of the election gun ban. Before being transferred to the provincial jail, Cañete and Baez spent five days under military custody where they reportedly endured physical and psychological torture.

However, being in prison was never a hindrance for Maricon. She continued her organizing work, this time, among fellow prisoners. Thanks to Maricon, the inmates were able to establish a cooperative which sells hand-made products including bracelets, necklaces and other handicrafts. Proceeds from the sale directly go the inmates’ daily food needs.

Due to lack of strong evidence on the charges against the Taysan 3, the Rosario Regional Trial Court in Batangas granted their petition for bail on March 2. However, the Court denied the Taysan 3’s petition to lower the amount for bail.

On May 26, the Task Force FrEEDOM launched a benefit mini-concert entitled “Free Maricon Montajes” to raise bail for the Taysan 3. It was during this mini-concert where actors Baron Geisler and Kiko Matos first crossed paths.

Even without the cause, the fight stirred discussion inside and outside the MMA community. URCC founder Alvin Aguilar said that it was the MMA fans asked them to put the two actors in the ring. Other fans, however, said Geisler and Matos should just resolve their conflict outside the ring because they are “entertainers” and not athletes.

In any case, Josiah Gil Hipona of Task Force FrEEDOM, expressed his sincerest gratitude to those who continuously support the Taysan 3 campaign in various ways. “Up to now, we’re still raising legal funds for the three. We thank the event organizers for their contribution in the campaign to free political prisoners.”

“We hope incoming President Rodrigo Duterte will make true his promise of releasing all the remaining political prisoners in the country soon,” Hipona said.