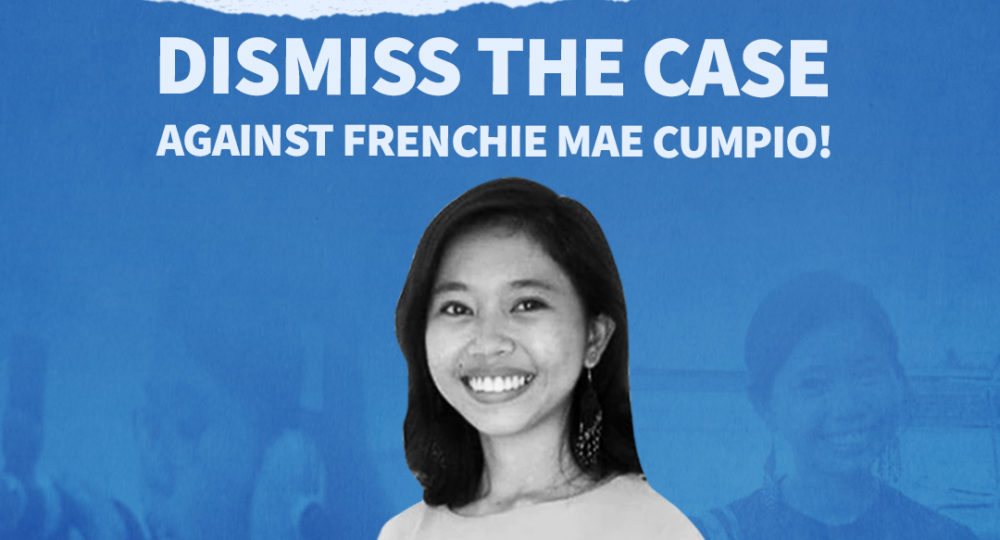 Altermidya Network today condemns the ruling of Tacloban City regional trial court branch denying the request of the Tacloban 5, including community journalist Frenchie Mae Cumpio, to quash the defective search warrant against them.

Judge Georgina Perez of Tacloban RTC branch 45 decided against the lawyers’ motion to quash the issued warrant that led to the arrest of Frenchie Mae and four activists in separate raids on February 7. The court also denied the motion to quash information, suppress the evidence, and return the seized items not included in the warrant.

We stand by the testimonies of the Tacloban 5: they are not only innocent of the charges filed against them, but are also victims of the state forces’ infamous tactic of planting evidence. Several eyewitness accounts have pointed how the raids were conducted in a manner that allowed the state forces to plant several guns and ammunition to frame the accused.

To detain our colleague Frenchie Mae for over four months is already a grave travesty and mockery of Philippine democracy. At a time when volunteer human rights defenders and community journalists are needed as frontliners to observe, report, and extend support to their communities in the arduous battle against COVID-19, the spurious charges that locked them up resulted in great disservice to the people. How many stories of the marginalized and underrepresented remain unreported because Frenchie Mae, the executive director of Eastern Vista and radio anchor at Lingganay han Kamatuoran, was not able to perform her duties due to her incarceration?

In issuing this ruling, not only has the Tacloban RTC trampled further on press freedom, but also amplified the injustice that resulted from the Tacloban 5’s incarceration.

The Duterte administration’s use of legal warfare against journalists is clearly a part of its continuing attacks against its critics and truth-tellers. In Nueva Ecija, the Guimba municipal council has decided to pursue its criminal charges against the radio network Radyo Natin Guimba, whose supposed “crime” was reporting the complaints of residents over the implementation of the Social Amelioration Program (SAP).

This move is taken directly from the Duterte administration’s playbook: weaponize the law to silence critics and intimidate the media to report issues in a manner acceptable to government. These are all clear acts of tyranny, which we in the alternative media will continue resisting.

Community journalists and the alternative media throughout the nation are one in calling: Junk the trumped-up charges against the Tacloban 5 and Radyo Natin Guimba! Free Frenchie Mae Cumpio and her colleagues! Defend press freedom!