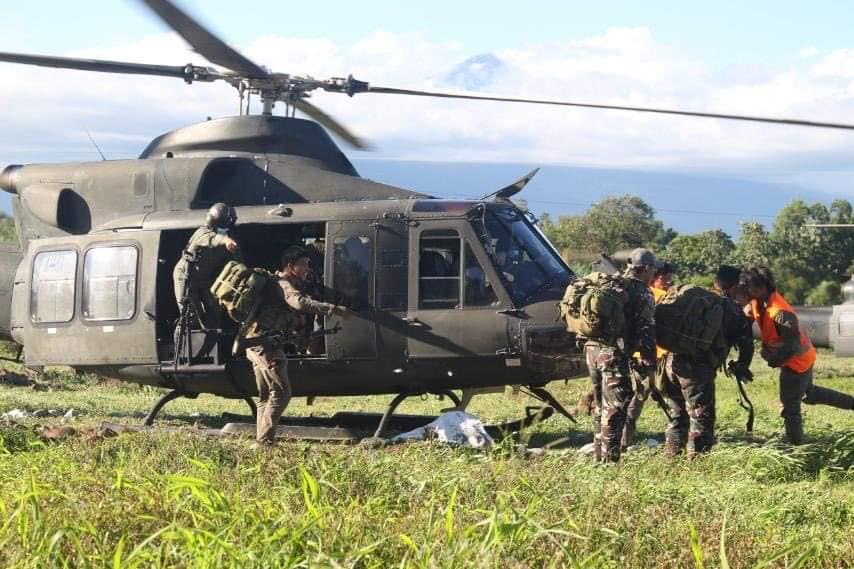 Helicopters on the scene. Photo from Original Energy Fm Dumaguete

Guihulngan City – Human rights group HUSTISYA Guihilngan refutes the AFP’s claim of an encounter with the New People’s Army (NPA) on August 14 that killed a civilian in Guihulngan City.

In a statement, the group said that there was no encounter, and that the 62nd Infantry Battalion did not kill an NPA fighter but a civilian. Government troops also harassed other residents in Sitio Maluy-a in Brgy. Sandayao, the group said.

HUSTISYA reported that 24-year-old Reken Remasog was shot dead and was found with his legs amputated and with other signs of physical violence. His younger brother, 17-year-old Reniel Remasog, was arrested together with two other minors Meriam, 17 and Mary Ann, 15, who were in the area only because they were charging their phones and hoping to get a better phone signal.

The arrested youth were reportedly brought to a CAFGU detachment in Brgy. Sandayao. HUSTISYA and child rights group Children’s Rehabilitation Center have called for the immediate release of the three minors.

Other cases of harassment had been reported in the barangay. HUSTISYA Guihulngan spokesperson Lea Nellis said that government troops ransacked the house of Delia Carahasan Tenianu, a 55-year-old farmer. After rummaging through her clothes and corn harvest, the soldiers reportedly fired a gun near her ear, leaving her traumatized.

(Based on HUSTISYA’s fact-finding report, Rekem and Reniel Remasog used to be residents of Brgy. Luz before they transferred to Sito Maluy-a out of extreme fear from incidents in their last residence. In March 2020, they were summoned by the 62nd IBPA to the house of the barangay captain to investigate a supposed “March 3 ambush”. Two days after they were called, around 6 unidentified people with bonnets came to their house. In May, their house was burned by suspected elements of 62nd IBPA together with some of their “assets” in Brgy. Luz. They were all identified by the residents. This is the reason why the family transferred to Sitio Maluy-a.)

The AFP earlier reported the statement of 303rd Brigade Commander Col. Inocencio Pasaporte, who said that the military responded to an information of NPA presence in Brgy. Sandayao.

But the Leonardo Panaligan Command-Negros Guerilla Front on its website explained that the AFP attack was a retaliation against citizens, and denounced the AFP’s “fake encounter”. It added that the AFP’s claim that military paraphernalia was retrieved in the area was also fake. Ka JB Regalado, spokesperson of the LPC-NPA, said that “the NPA ambushed the AFP in Sitio Tabago (around 2 kilometers away from Sitio Maluy-A which takes 1 hour on foot) in the same barangay, leaving at least 10 troops killed-in-action while the NPA safely maneuvered away from the encounter site, with no casualty. The arrival of helicopters was in fact an affirmation that they were rushing to cover-up the fatalities.”

“The AFP’s retaliatory acts are being vented out against innocent civilians, prompting even more to join the armed struggle for a just and lasting peace,” the statement read.

HUSTISYA Central Negros called on the Commission on Human Rights to investigate the human rights violations in Guihulngan City and to take action on the elements of the military involved in these crimes. The group also appealed to various sectors and groups to show their support for the victims.

‘Laban, Kampamilya’: Altermidya’s statement of support for the People’s Initiative for ABS-CBN ...