Home›Network›NutriAsia 17 and the search for justice 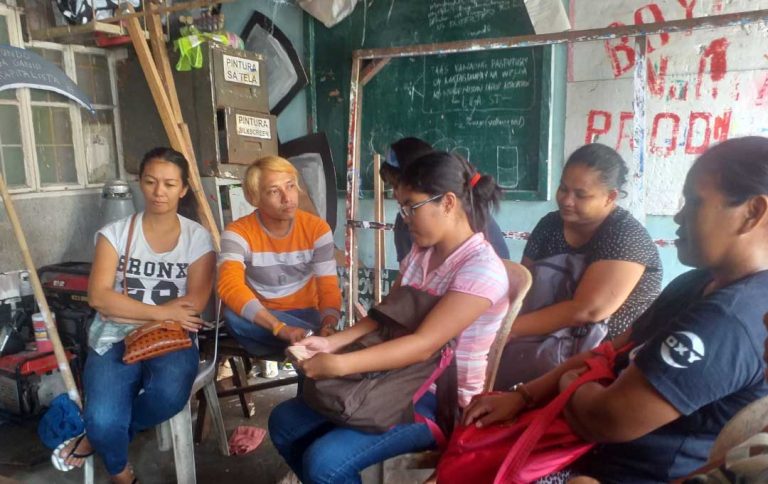 NutriAsia 17 and the search for justice

John Kristoffer Galang’s wife Joanne, also a worker at NutriAsia, was one of those arrested.

Joanne was already on the other side of the factory when the violent dispersal began on July 6. “But she thought I wouldn’t last if the police came for me, so she decided to go back for me. That was how they got her,” Galang told Bulatlat in an interview.

Galang then showed the video of the NutriAsia dispersal. Five policemen ganged up on one of the workers and pushed her to the ground, before dragging her to a waiting police mobile. “That’s her,” Galang said.

Galang belied all the accusations hurled against them. “They say we committed arson because we used some wood to cook our rice. That’s ridiculous. And robbery! The case said we stole a pallet worth P100,000. Let me ask you this: if the police were chasing you down, would you bother stealing a pallet? What would you even do with a pallet?” he said.

The lockout of the condiments giant company’s factory in Cabuyao on July 6 barely lasted four hours before it was violently dispersed by police, armed guards, and even regular workers.

“We couldn’t believe it. Before they bulldozed the gate, we saw them put a live wire through it. What would you think if you saw that? You’d think that they had no plans of keeping us alive,” Galang recalled.

After the gate had been destroyed, Galang said the guards and policemen assaulted them.

“They treated us like animals. Worse than animals, even. Animals get treated more humanely that what they did to us,” he said.

Those arrested were taken to the Cabuyao City Jail and detained. The NutriAsia workers quickly set up their picket outside the City Hall, where the jail was, not only to call for their regularization, but to call for the immediate release of the NutriAsia 17 workers.

Dahlia Azores’s husband Christian is one of the 17 arrested workers.

“They arrested Christian while they were still in the factory. They beat him up and placed him in a container van with a few others. I honestly thought he was going to get salvaged,” Azores told Bulatlat.

Azores said her husband and his companions at the city jail were repeatedly forced by the police to admit to being members of the New People’s Army.

“Where did you see NPA members working in a factory?” Azores said.

The workers pleaded with Cabuyao City Mayor Mel Gecolea to engage them in dialogue and assist in their case, but any attempts to talk were met with excuses that Gecolea was unavailable, Azores said.

On July 22, Vice Mayor Leif Opiña negotiated with Kasapina-Olalia for the Cabuyao LGU to help with the custody of NutriAsia 17 case. The next day, the 17 NutriAsia workers were transferred to the jail in Calamba, Laguna under the care of the Bureau of Jail Management and Penology.

“That day, one of us was supposed to deliver breakfast to them,” Galang recounted. “A lot of us were still in Manila for SONA, so there weren’t a lot of people in the picket. When our fellow was about to go to the City Jall, he noticed the transport vehicle. He quickly dropped the food and got on his bike to follow it.”

The September 6 hearing came as a hard blow not just for the 17 NutriAsia workers, but for the families of the accused. Moving the case to September 27 meant more weeks of waiting for a decision that they aren’t sure will go their favor.

“It’s difficult,” Azores said. “I wish the judicial system has consideration for poor people like us. September 27 is almost a month away, and it’s hard to survive that long.”

Azores and her husband have been renting a room near the Light Industry and Science Park. “It’s been two months and money’s stretched thin. We’ve been getting by from borrowing money from others. Sometimes it’s hard to even just visit because the commute’s too expensive. But we try our best.”

“It also helps that we’ve gotten to know each other,” Azores said, referring to the other family members of the NutriAsia 17. “At first, we barely knew each other. But we realized that we’re sharing the same problems, the same struggles. It’s sort of comforting to have other people around who understand what you’re going through.”

It has been over two months since the 17 workers were first detained in the Cabuyao City Jail. Currently, the arraignment for their cases of arson and robbery is set on September 27 at the Regional Trial Court, while the charges of grave coercion, assault, and malicious mischief are set to be heard by the Cabuyao Municipal Trial Court in November.

In the meantime, the best the families could do is cheer them up and help with preparing the case. “We’re doing our best,” said Azores. “Sometimes, they’re more worried for us than we are for them, because they know how hard it is. But we’re keeping on.”

“The first time we visited them, we were all emotional about it. Everybody cried. We just couldn’t help it. But if we cry in front of them, they’ll just feel worse, so we try our best to look strong. We try to assure them that we’re doing everything we can, and we want them out as soon as possible,” she said.

Galang is similarly hopeful. “I’m sure the case will be thrown out, no matter what. I’m sure justice will still prevail.”

Galang’s seven-year-old daughter Hannah interrupted her father, holding a bag of chips and a drink she bought at the store across the street. She insisted that her father drink some. Galang tried to explain that he was in the middle of an interview, but in the end, he couldn’t say no to his daughter.

He smiled. “She’s like her mother,” he said before pausing. “I miss Joanne.”