Home›Network›Officers of the court back Manila judge Malagar
Network

Officers of the court back Manila judge Malagar 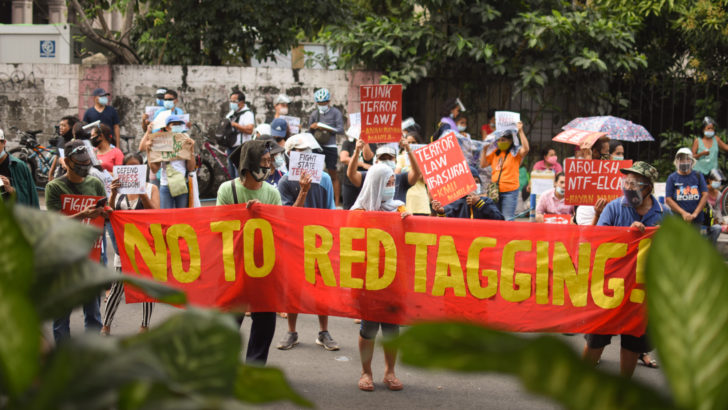 “To threaten members of the judiciary is to ‘sow fear’ at a ‘critical element’ of the legal system. Broadcasts and posts showcasing those who verbally assault judges encourages the public to do the same. If judges can be treated disdainfully without consequence, the rule of law becomes a hollow promise.”

In a statement, the Integrated Bar of the Philippines (IBP) said that “these capricious and dishonest statements go beyond reasonable discussion. They foment vitriol and hate against our judges,”

On Sept. 21, the Manila RTC Branch 19 dismissed the petition of the Department of Justice to proscribe the Communist Party of the Philippines (CPP) and the New People’s Army (NPA) as terrorist groups for insufficient evidence.

In the decision, Malagar pointed out that acts committed by the revolutionary groups are rebellion and not terrorism.

This did not sit well with the former spokesperson of the National Task Force to End Local Communist Armed Conflict, Lorraine Badoy, who posted in her official Facebook page a statement red-tagging Judge Malagar. She also implicated the judge’s husband, lawyer Leo Malagar who is the deputy national statistician of the Philippine Statistics Authority and University of the Philippines-Cebu chancellor.

The IBP calls for the immediate activation and utilization of the Judicial Marshal Service which was created under Republic Act 11691 or the Judiciary Marshals Act to safeguard members of the court.

Citing the Supreme Court decision, the IBP said, “False reports about a public official or other person are not shielded from sanction by the cardinal right to free speech enshrined in the Constitution. Even the most liberal view of free speech has never countenanced the publication of falsehoods, specially the persistent unmitigated dissemination of patent lies.”

“As officers of the court charged with its protection, the IBP reserves the right to resort to these remedies,” the IBP said.

The group said that rational reservations on the decision promulgated by judges are normal but attacking and threatening them is not.

They said that it is the judiciary’s job to decide on disputes and “no judge should ever feel threatened just by performing that duty.”

“To threaten members of the judiciary is to ‘sow fear’ at a ‘critical element’ of the legal system. Broadcasts and posts showcasing those who verbally assault judges encourages the public to do the same. If judges can be treated disdainfully without consequence, the rule of law becomes a hollow promise,” they added.

Earlier the Philippine Judges Association (PJA) and HUKOM, an organization of trial court judges also denounced the red-tagging against Malagar.

The PJA called on the present administration “to declare that in no time under its watch, will democracy be imperiled by an irresponsible and unfounded assault on a trial judge.”

They assured the public that as sentinels of democracy, they will continue to perform their “constitutionally-mandated duty undeterred by threats or undeserved vilification for nothing can guarantee a vibrant democracy society more than an independent judicial system.”

“Let us not normalize the use of violence against persons as a form of redress by being silent. And we appeal to all sectors to help us serve the public better by allowing us the space to do so without threats, pressure and improper interference,” HUKOM said in a statement.

Meanwhile, the Chevening Alumni Foundation of the Philippines defended and expressed their support to Malagar, also a fellow Chevening scholar.

“We urge the public to call out personalities who continue to propagate such behaviour, and fully support efforts to end this harmful practice,” the group said in a statement. (RTS, RVO)