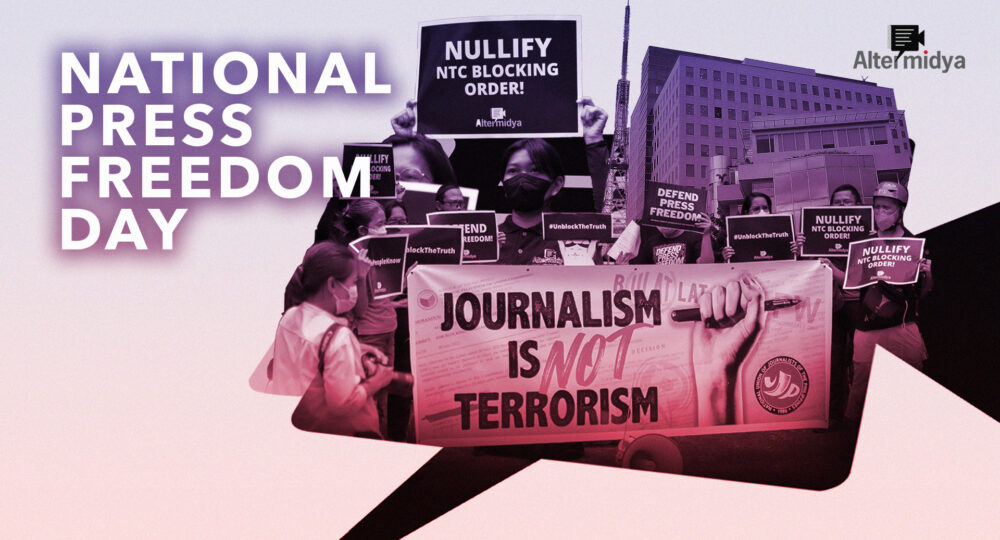 On the first observation of National Press Freedom Day

The Philippines observes its first National Press Freedom Day today, August 30, 2022, after former president Rodrigo Duterte signed into law Republic Act No. 11699 on April 13. The date marks the birth anniversary of Filipino propagandist Marcelo H. del Pilar, recognized as the “Father of Philippine journalism,” for his pivotal role as editor of the La Solidaridad.

Although Filipino journalists welcome the passage of such a law declaring August 30 an annual observation in honor of the press, we also recognize that continued media repression, threats to free expression, and journalists’ poor work conditions inhibit genuine “press freedom” in the country.

The mere addition of a National Press Freedom Day to the calendar simply cannot offset the rights violations that members of the Philippine media continue to face.

From March to June 15 alone, the NUJP Safety Office documented 35 cases of attacks against journalists and media workers. Notably, much of this period already covers the months when RA 11699 was signed into law.

Under the Duterte administration, there was no shortage of state-linked attacks on press freedom: from ABS-CBN losing its franchise to Duterte allies in the House of Representatives, to Rappler and its Nobel laureate Maria Ressa facing multiple court cases attributed to its critical reportage.

Lesser known still are attacks on alternative news outfits, which were established to primarily cover the country’s marginalized sectors. These include the recent order by the National Telecommunications Commission (NTC) to block the websites of media organizations like Bulatlat and Pinoy Weekly. The NTC order was made under the government’s false claim that these news outfits are “affiliated to and are supporting terrorists and terrorist organizations.”

Over 80 incidents of press freedom violations involving alternative media were recorded
during the Duterte administration. Red-tagging comprised the bulk of these attacks, followed by legal harassment or charging journalists in court. This is the case of Eastern Visayas-based community journalist Frenchie Mae Cumpio, who has been detained for more than two years because of fabricated cases.

The Altermidya-People’s Alternative Media Network demands the government truly uphold the freedom of the press by putting a stop to attacks on journalists and by upholding the people’s right to free expression. Likewise, it challenges employers and newsrooms to provide fair compensation, just working conditions and job security for all workers.

Finally, Altermidya enjoins our colleagues and the public to #DefendPressFreedom by collectively standing with the country’s news media, and by continuing to assert our right to free expression. In the spirit of Del Pilar, and generations of Filipino journalists who did not fear nor cower in speaking and reporting truth to power, we must continue with greater perseverance and strength. We will not be silenced only if our calls resound louder than ever.

Having a National Press Freedom Day is futile if Filipino journalists can get harassed or killed any other day of the year. Until that fear is gone, we will and we must fight for our right to press freedom and free expression.