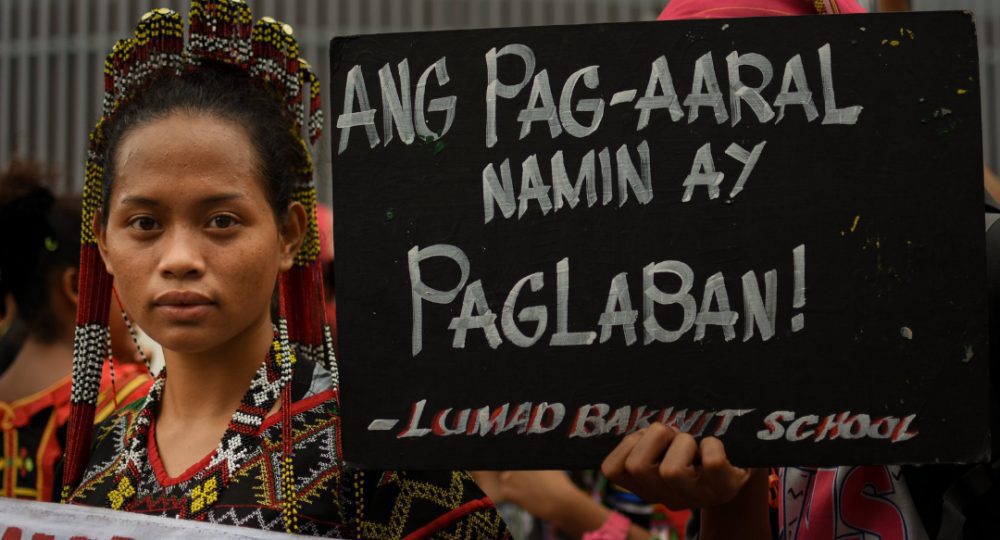 The group noted that the so-called fact-finding team formed by the Education department did not even visit any of the 54 campuses.

MANILA — The Save Our Schools Network assailed the recent Department of Education (DepEd) resolution, ordering the permanent closure of at least 54 schools catering to indigenous peoples as a completion of the “full cycle of systematic attack” on tribal schools.

The 54 campuses are part of the Salugpongan Ta Tanu Igkanogon Community Learning Center (STTICLC) in Davao Region, which are among the schools constantly under threat. No less than the president himself threatened to bomb these schools.

Rius Valle of Save our Schools Network, said in a statement, “We are enraged over the decision of the DepEd Region XI to permanently shut down the Lumad community schools based on the malicious and false claims of the military, disregarding the fact that such move is tantamount to disenfranchisement of thousands of Lumad children to their right to education.”

Such attacks and accusations are not surprising as these schools and their respective communities have long been active in the defense of their ancestral domains from big, extractive, and foreign-owned mining.

“It’s really hard to imagine how the officials of the education department get a good sleep when there are Manobo children who are now deprived of access to education,” Valle said.

Valle pointed out that no investigation was conducted to look into Esperon’s claims that these schools are recruiting members for the New People’s Army, the armed wing of the Communist Party of the Philippines.

The group noted that the so-called fact-finding team formed by the Education department did not even visit any of the the 54 campuses.

Valle said the fact-finding team only visited Nasilaban, Talaingod but did not proceed to where the schools are situated.

“Basically, there was no investigation that took place,” he said, adding that there was “no intention to look at the merits” of the case and find out the truth on the accusations being hurled against them.

Instead, Valle noted that Education Secretary Leonor Briones has, in the past, justified the July suspension orders by “parroting the vilification and recycled accusation that the Salugpongan schools are teaching communist ideology among its students” — a line long espoused by state security forces.

“Contrary to what the DepEd is trying hard to portray, the order is baseless, partial and reeks with ill-motive. It is a clear betrayal of Lumad’s hope for education,” Valle added.

Valle said this has provided the military a platform to weave “fabricated stories and to legitimize attacks against these schools.”

Contrary to military claims, Save Our Schools Network said Salugpongan, established in 2007, has been providing Manobo and Lumad communities with free, quality, and culturally relevant education.

Valle said “only the likes of President Rodrigo Duterte, NSA Esperon, Secretary Briones and the elements of the Armed Forces of the Philippines would be happy upon hearing such news.”