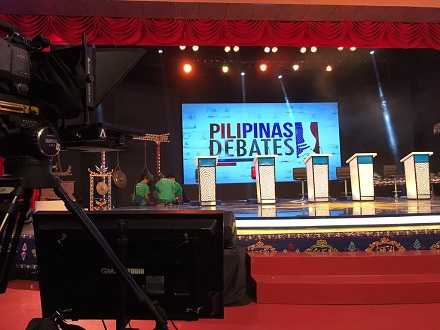 CORPORATE interests took precedence over the public’s right to know through access to as many news sources as possible when the Commission on Elections’ (Comelec) lead media partners – GMA-7 TV and the Philippine Daily Inquirer – barred live coverage by community journalists of the first leg of the presidential debates held in Cagayan de Oro City on February 21.

Those interests are summed up in the focus on profit through the “exclusives” that sell more newspaper copies and generate the high broadcast media ratings that attract advertisers. The Kapisanan ng mga Broadkaster ng Pilipinas (KBP) was supposedly coordinating the event, but did not seem to have had much to say on the matter. (GMA-7 TV, which is not a KBP member and therefore not bound by KBP rules on the ratio of ads to programs, ran 48 minutes of commercials during the two hour program.)

The root of the problem is Comelec’s engaging privately-owned media organizations as its lead partners and its giving them exclusive access to report the debate live through a Memorandum of Agreement that also set the terms of other media organizations’ coverage. Unfortunately the Fair Elections Act (RA9006) mandates its entering into such arrangements – which allow the media organizations to sell airtime for commercials.

The first casualties of these terms were the community media, including but not limited to the members of the Cagayan de Oro Press Club (COPC) and other Mindanao-based journalists, who not only had the right but also the obligation to cover the event in behalf of their respective audiences’ right to know.

The COPC described the terms of coverage as “harsh and very unfriendly to usual media coverage,” pointing out through its secretary general Herbie Gomez that the 25 community journalists allowed into the venue – the 500-seat mini-theater of CDO’s Capitol University – were limited to being “observers,” and prohibited from using any recording equipment and even the use of cellphones to take photographs. Even the use of mobile phones to take photos and videos was also discouraged. Some journalists also complained that they were denied entry into the venue and even into the Media Center where the debate could be watched via video.

Although COPC members covered the event “in protest,” other media organizations decided to generate stories outside the venue, among them MindaNews, whose staff did Man-on–the Street interviews to get the opinions of ordinary citizens on the issues that were the subjects of the debate – and monitored the tsunami of ads aired by non-KBP member GMA-7.

Because of the limits imposed on coverage, the online news site Rappler filed a complaint against Comelec chair Andres Bautista before the Supreme Court demanding nullification of several provisions of the Memorandum of Agreement (MOA) between Comelec and several media organizations, including Rappler itself, who, unfortunately, did sign the MOA. But in an article in its site, Rappler alleged that the Comelec “restrained” its “free press rights” by granting exclusive broadcasting and livestreaming rights to its two media partners. Rappler, which had earlier raised reservations over some of the MOA provisions, said its editors were told that those concerns would be addressed once the MOA was signed. They signed the MOA on that assumption, said Rappler, was nevertheless not allowed to cover the event live.

The right to know includes public access to as many news sources as possible, on the assumption that their perspectives differ from each other. Limiting the citizenry’s sources of information on matters of public interest such as the programs of government of the individuals from among whom they’re expected to choose their highest officials would therefore be a restriction on that right by allowing the citizenry only a limited choice of reports on events as they unfold. These limitations create a situation almost similar to that in countries where only state-approved news sources are allowed to cover events of public interest.

In the Philippine context, however, the contention among media organizations that essentially share the same perspective and the same bottomline interests does not necessarily lead to a multiplicity of perspectives. Only some community press and alternative media practitioners have provided perspectives different from thoseof big media – which include Rappler.

The principle itself is worth defending, if only for the sake of its being internalized by media practitioners as an imperative when covering any event or issue. In the present case, while it can be argued that what the Comelec’s lead media organizations had was “limited exclusivity” in that other media groups could report on the debate after it had taken place, the fact that their source was still the video provided by the Comelec’s media partners limited their perspectives.The liberal capitalist media model, with which the biggest corporate media groups are presumably in agreement, after all emphasizes the need for a multiplicity of sources of information that competition in a “free market” supposedly makes possible.

Two more presidential debates and one vice presidential debate are on schedule. These too are likely to be covered under the same mantle of “limited exclusivity.” But what’s even more crucial is whether, as the Rappler argument presumes, among the media organizations that will be covering the debate there is, or will be, the differences in perspectives that the people need to make intelligent choices. That has always been an issue in media coverage not only during elections, but on other issues as well, as the corporate media system focused on profitmaking provides the public with information that, in far too many cases, are of little use to it because it is framed from the perspective of commercial interests rather than from the fundamental journalistic purpose of serving the public.