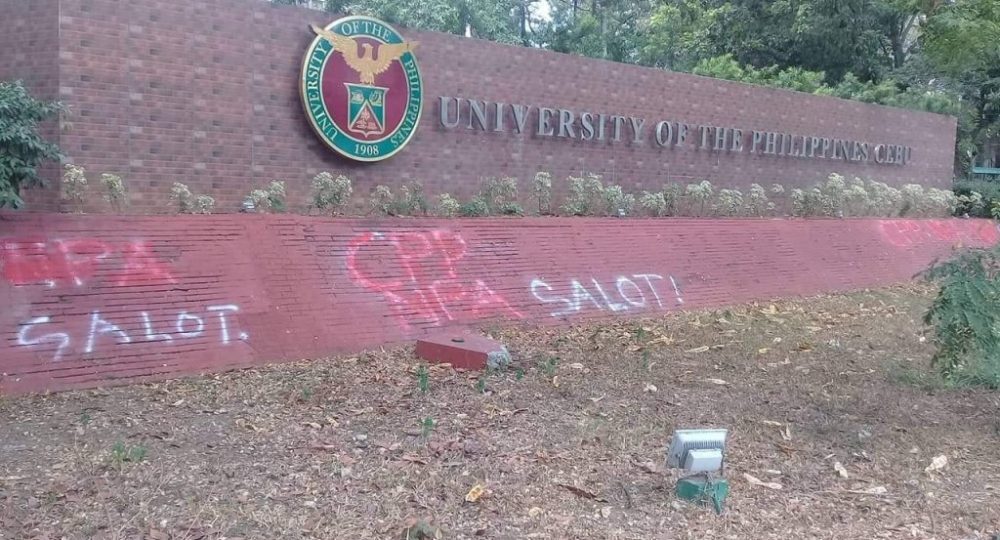 DAVAO CITY, Philippines — Students and faculty of the University of the Philippines in Cebu (UP-Cebu) expressed alarm over what they said a malicious attempt to red-tag the institution after painted words “CPP-NPA salot” were seen in front of the campus on Friday morning, March 29.

The act coincides with the 50th founding anniversary of the New People’s Army, the armed wing of the Communist Party of the Philippines, on March 29.

The All UP Academic Employees Union (AUPAEU) Cebu in a statement said the attack was directed to the entire UP community known as “a bastion of liberal and progressive ideas.”

The union described the incident as a “barbaric act committed by suspected military elements” that endangered the lives of UP activists.

“This red-tagging is a real threat as this has been proven to be fatal, especially to known progressive individuals and activists. Hundreds of critics and dissenters have been assassinated and still some others are currently being harassed because of the regime’s communist witch-hunting,” said Regletto Aldrich Imbong, AUPAEU Cebu Chapter Vice President.

Meanwhile, student group Nagkahiusang Kusog sa Estudyante (NKE UP Cebu) also condemned the act saying it is another “baseless and malicious” tactic to quell dissent among UP students who are critical of the government.

“UP has undoubtedly produced some of the most critical youth and student leaders in history. Many of them have led strong student movements throughout time. As such, a fascist and reactionary state such as the Duterte administration would also undoubtedly be fearful of the rising youth and students movement against tyranny, which UP students are a part of,” said NKE in a statement.

“This ongoing tagging of UP students as members of rebel groups continues to proliferate all over the country. This puts the lives of thousands of students at risk,” it added.

The University Student Council of UP Cebu has called on the university administration to release a statement and condemn any forms of red-tagging.

“This is not the first time that the rights and welfare of the UP Cebu students were threatened because of such a baseless attack. We, therefore, demand the UP Cebu administration be in solidarity with the students and release a statement condemning all forms of red-tagging,” said the student council in a statement.

“We also call the administration for a quick and comprehensive investigation in order to seek accountability, along with the immediate installation of functional CCTV cameras,” it added.

The UP administration has yet to issue a statement as of press time.

Last year, UP Cebu alumna Myles Albasin and five others were arrested by soldiers in Mabinay, Negros Oriental for their alleged involvement with the communist rebels.

The six pleaded not guilty for the charges of illegal possession of firearms and explosives. Albasin denied the charges saying she was unarmed and in the area to immerse with the local peasant community. (davaotoday.com)