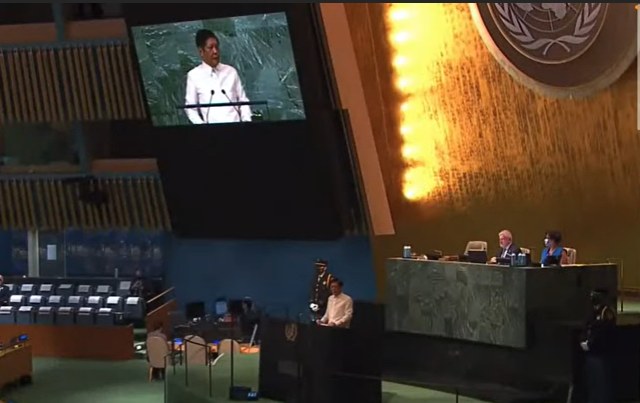 MANILA — Human rights defenders and environmental advocates are up in arms over what they referred to as a “grand show of hypocrisy” as Ferdinand Marcos Jr. addressed the United Nations’ General Assembly.

“Marcos Jr. used the world stage at the UN General Assembly to talk about lofty universal ideals and principles that he and his family refuse to live by. Fifty years after his dictator father’s martial law, he continues to justify the human rights violations committed during martial law, while keeping the billions of people’s money stolen by his family and their cronies. It is a grand show of hypocrisy, another act meant to deodorize and atrocious crimes of plunder, massive human rights violations, and exploitation of the Filipino people,” said Karapatan secretary general Cristina Palabay.

In his speech before the 77th United Nations General Assembly, Marcos Jr. called for global unity and expressed to need to reaffirm the “wisdom of the founders of our United Nations” by transcending our differences and committing to ending war, upholding justice, respecting human rights, and maintaining international peace and security.”

He also cited the Philippines’ United Nations Joint Program on Human Rights as an “example of a constructive approach that puts our people, not our politics, at the center of this work.”

However, Palabay said that Marcos Jr. “continues to implement the draconian policies of his predecessor Duterte that have resulted in extrajudicial killings, torture, enforced disappearance, illegal and arbitrary arrests and detention.

Among the most recent arrests under Marcos Jr. include women rights advocates  Adora Faye de Vera and Atel Hijos, who, Karapatan said, are both survivors of the martial law of the late dictator Marcos Sr.

“No, Mr. Marcos, you cannot hoodwink everyone, especially those who experience and know the real human rights situation,” she added.

Jon Bonifacio, national coordinator of environmental group Kalikasan, said they expected Marcos Jr. to include the issue of climate change as among his key messages. However, they said that “despite hitting the right notes,” these remain mere posturing with the country’s plans of expanding the local fossil gas industry.”

In his speech, Marcos Jr. recognized that climate change is the “greatest threat affecting our nations and our peoples” and that it will require a united effort, which the United Nations can lead. He also noted how the effects of climate change are uneven and that it reflects historical injustice as the “least responsible suffer the most.”

Bonifacio, however, said that the human rights dimension of the climate crisis and the various environmental issues should not be forgotten, particularly the planned dams and mega-solar farm projects that will benefit local billionaires.

He also pointed out that the Philippines ranked worst in the documented human rights violations against land and environmental advocates.

“All we are getting from Marcos Jr. so far are flowery statements while millions of Filipinos suffer directly from the impacts of our ongoing economic and ecological crisis,” Bonifacio said, “more than empty promises made thousands of miles away from the country, we need concrete action that puts the interests of the Filipino people first.”

Meanwhile, Karapatan reiterated that there is no functioning judiciary that may provide domestic redress mechanisms, while Marcos Jr. has rejected the proposed investigations of the International Criminal Court, particularly on the drug-related killings under former president Rodrigo Duterte.

“Along with recent disinformation roadshows of the Marcoses, these attempts to suppress narratives on past and present social realities show the guilt-laden obsession of the Marcoses to deodorize their name. But the truth, powered by the people’s collective experience of woes and struggles, will always prevail.

Palabay said, “Today, we march with thousands to uphold the people’s struggle for genuine freedom and democracy.”