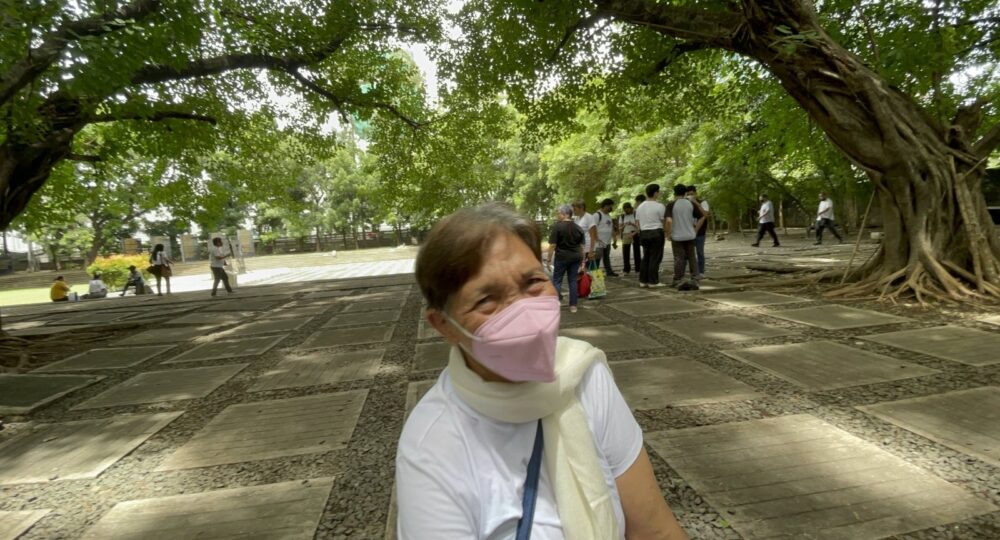 Scars of Martial Law: Nanay Puring and the massacre she can #NeverForget

Purificacion Viernes, 74, still has a hard time walking due to a foot injury she suffered almost 40 years ago.

Nonetheless, Nanay Puring, as she is more commonly known, managed to attend the oathtaking program led by victims and survivors of the Marcos dictatorship at Quezon City’s Bantayog ng mga Bayani.

How could she miss it? The event directly parallels the presidential inauguration of the dictator’s son, Ferdinand ‘Bongbong’ Marcos Jr., in Manila’s National Museum.

Like the other attendees, Nanay Puring wore white—a color associated with peace and purity.

She matched this with a much-needed accessory, one that she couldn’t leave her house without: her crutches.

Although walking aids might not seem out of place for a woman her age, Nanay Puring has had hers much longer. Around half a lifetime ago, in fact.

The cause of her ailing feet is neither disorder nor disease, but a massacre nearly four decades ago that nearly claimed her life.

It was around 10 p.m. on March 31, 1984, when military forces attacked Nanay Puring’s mountain home in Occidental Mindoro.

They killed her husband, her nine-year-old daughter Marieta, and her five-year-old son, Ronaldo.

Nanay Puring herself played dead to stay alive, but she didn’t need to try too hard as she was on the brink of lifelessness. Her survival instinct would save herself and her other daughter, 13-year-old Cecile, whom she instructed to silently head to her uncle’s house.

Although she was only taken to the hospital at around 4 in the morning, medics were able to save Nanay Puring, who sustained severe foot injuries.

She was confined for at least a year, while the perpetrators evaded justice. The senior citizen added that she wasn’t able to receive any form of compensation for her medical bills.

Beyond her condition, it was the acute pain of grief that could not be treated.

(If I did anything before that wasn’t good to them, what did my two children have to do with that? Which is why I pray that what happened before wouldn’t happen anymore now.)

At the time of the massacre, Nanay Puring was part of a human rights advocacy group based in their local church.

She recalls how the military would threaten members of their organization: “‘Pag kayo hindi naghinto-hinto diyan, talagang papatayin namin kayo.” (If you don’t stop involvement with your organization, we will definitely kill you.)

Martial Law notoriously targeted different progressive groups, religious or otherwise. It branded them as “communists” and “terrorists,” a scheme known as red-tagging that eerily continues today.

Likewise, the attacks on activists and progressive groups pervade to present day.

Adding insult to injury are efforts to distort Philippine history, especially in the Marcos years.

Names etched on the wall of remembrance at the Bantayog ng Mga Bayani is a testament of students, workers, writers, and human rights defenders—ordinary Filipinos—who were martyred during Martial Law.

Meanwhile, those who barely survived like Nanay Puring are still fighting for justice decades later. As if Nanay Puring’s disability was not enough baggage to carry, she and countless others would have to relive their trauma as Marcos Jr. takes his seat as the highest official of the country.

The dictator’s son to this day refuses to acknowledge the damage wrought by his father’s regime. Moreover, the Marcos patriarch is still being touted as an icon who brought upon the “Golden Age” of the Philippines.

With billions to spend for a digital army and decades to sow misinformation, the Marcos camp has systematically engineered their return to power, according to historians and human rights activists.

In the Marcos camp’s version of “history”, the dictator Marcos isn’t a vanquished dictator but a betrayed leader—with Marcos Jr. as his rightful successor.

This, of course, is far from the truth. Aside from records upon records of evidence against the Marcoses, Nanay Puring lives as a physical embodiment of the horrors of Martial Law.

She also represents the courage that it takes to stand again. There are others who live with battle scars, but those physically unscathed suffer a different kind of mental trauma: the harrowing possibility that Marcos Jr. is exactly like his father—if not worse.

The ceremony held by Marcos survivors in Bantayog is ultimately a resolve to continuously fight against what they call nationwide gaslighting and historical distortion, to persistently counter all acts of tyranny, and to preserve and protect people’s rights and freedoms.

Today, Nanay Puring still has difficulty getting on her feet. But her stand is clear: until the martyrs and survivors of Martial Law get the justice they deserve, it is the Filipinos’ collective duty to resist.

Until then, she keeps on walking.