Home›Media Issues›STATEMENT: Drop all charges vs. journos, no to attempted censorship by NutriAsia 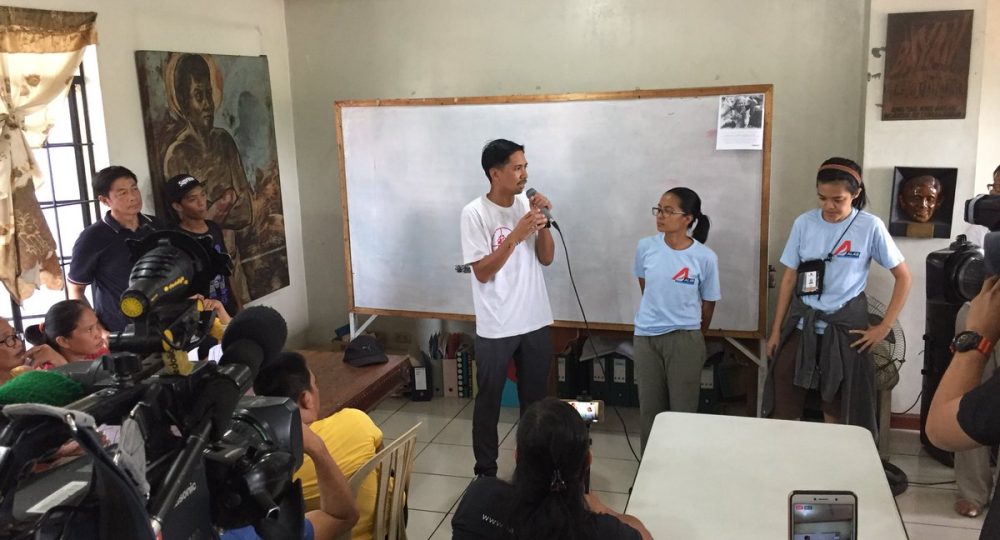 STATEMENT: Drop all charges vs. journos, no to attempted censorship by NutriAsia

The AlterMidya Network, a national network of independent media outfits in the Philippines, calls on the Philippine National Police and NutriAsia to drop all charges against the five journalists who were arrested while covering the dispersal of a strike by NutriAsia workers last July 30. AlterMidya also condemns the audacious move by NutriAsia to censor our journalists by attempting to have them sign a ‘quit claim’  waiver, which indicates that they will not release any story about the dispersal, among others, in exchange for having the charges against them dropped.

AlterMidya correspondents Eric Tandoc and Hiyasmin Saturay, editorial staff Avon Ang, and student intern Psalty Caluza, along with campus journalist Jon Bonifacio, were ordered released from detention today, together with workers of NutriAsia and their supporters. However, charges of violation of Batasan Pambansa 880 on illegal assembly, as well as public alarm and scandal, remain against the five journalists.

The filing of such charges against Filipino journalists are unprecedented in recent history, utterly baseless, and beyond ridiculous. They must be immediately dropped. The AlterMidya Network also calls out the management of NutriAsia for its outright violation of the constitutional right to freedom of the press through its coercive attempt at censorship. The question must be asked: why are they afraid of media coverage? What images and stories do they want hidden from the public?

We support plans by lawyers to file counter-charges against the PNP and NutriAsia security guards in behalf of the NutriAsia 19. Our correspondent Tandoc was among those beaten up by police and NutriAsia security forces. Video footage shows that Tandoc was clearly shooting with a video camera when he was grabbed and hit with truncheons. Video footage taken by Tandoc also shows campus journalist Bonifacio being violently dragged by police and security forces. This kind of violence inflicted upon journalists in the course of fulfilling their duties is unacceptable and is a travesty of press freedom.

Camera equipment worth around P100,00 and other equipment that have been confiscated from these journalists must be immediately returned as well.

The AlterMidya Network vows to continue to report on the NutriAsia workers strike faithfully and without fear, especially in the light of mainstream media coverage that fails to take the side of the workers into account. We call on other journalists to exercise truthful and critical reporting on the NutriAsia labor dispute, despite advertising interests of their media owners. Now more than ever, the Filipino people, especially the working class, needs journalism that will cut through, and not become an echo chamber of, lies that imperil their interests and their very lives.

The AlterMidya Network would also like to extend gratitude to our audience, media colleagues here and abroad, lawyers and other supporters who worked for the release of our journalists. We will continue to see to it that the NutriAsia 19 achieve justice for their injuries and unjust detention, and additionally for our media personnel, the violation of their right to report and fulfill their duty as journalists.