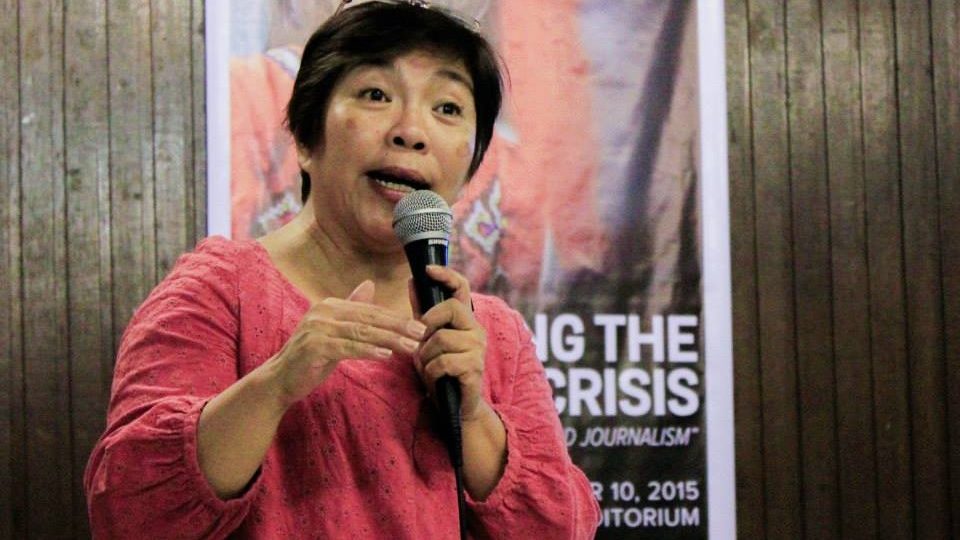 In an official statement by the 4th ID—wherein the military denied its involvement in the burning of a teachers’ cottage of the ALCADEV Lumad school in Sibagat, Agusan del Sur—Macario questioned where Espina-Varona got her information, referring to a Facebook post wherein she merely reposted an alert from the human rights group Karapatan.

“Aside from the witnesses, the only persons who can give this information are the perpetrators,” Macario said, alluding that Espina-Varona got the information from the communist New People’s Army (NPA). Karapatan, in its alert reposted by Espina-Varona, said that the suspects of the November 12 arson were members of the 23rd Infantry Batallion. But as with numerous Lumad killings for which it is accused of perpetrating, the Armed Forces of the Philippines (AFP) denied the claim and instead pointed at the NPA.

In hot water over human rights violations (HRVs) against the Lumad, the AFP is now falsely pointing an accusing finger even at journalists like Espina-Varona, who merely report on or give their opinion on these incidents of HRVs. Espina-Varona, former chairperson of the National Union of Journalists of the Philippines (NUJP), is a columnist for abs-cbnnews.com and a prominent blogger. Incidentally, the social media post mentioned by the military was not even a news or opinion piece by Espina-Varona herself, but a mere repost from a human rights organization.

With this open harassment of Espina-Varona, it is not incredible to believe that the AFP was also behind the meme that came out in an anonymous Facebook page, showing the journalist’s photograph and describing her as an “asset” of the CPP-NPA-NDF. The said meme was shared by military officers, according to Espina-Varona.

Such red-baiting is not simply amusing or misguided. In a climate of impunity under the Aquino administration wherein hundreds of civilians—including journalists—have been killed simply for their political beliefs or for carrying out their profession, being tagged as an “enemy of the state” is extremely dangerous. It can be recalled that during the Arroyo administration, media organizations such as the NUJP were branded by the AFP as an “enemy of the state.” Alternative media groups and practitioners are also no stranger to red-baiting.

Journalists must be free to report and express their opinions on the issues of the day without fear. The AFP’s actions and statements are clearly meant to dissuade and scare not just Espina-Varona, but all other journalists who dare to break the mold of corporate-oriented, government-centred reporting and report from the margins—in this case, from marginalized Lumad communities—where truth-telling is so urgently needed. We are staunchly behind Espina-Varona as she fights back this form of tyranny and gross violation of constitutionally guaranteed rights to freedom of expression and of the press. The AFP must at once issue an apology to Espina-Varona, and stop the red-baiting of journalists.

Ampatuan Massacre, a grim symbol of reigning impunity under Aquino

‘Environment-friendly’ project an excuse for landgrabbing in Hacienda Luisita?