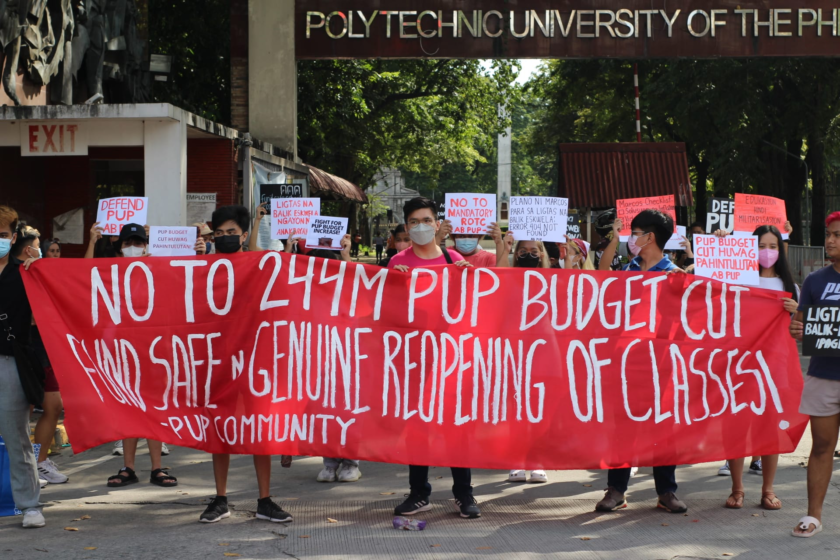 Student leaders like Kirchhoff Angala, president of Polytechnic University of the Philippines (PUP) Central Student Council, condemned the budget decrease and appealed to the government to heed their calls: “We need funds for the safe resumption of physical classes, so the government should allocate a budget for education, not (on) fascism and corruption.”

For the proposed 2023 budget, the country’s state universities and colleges stand to lose at least 10.48 percent of its allocation. This, according to student leaders here, translates to the trampling of their rights and welfare.

“Furthermore, facilities are not in good shape, equipment is lacking, and the University certainly wouldn’t be conducive for a blended or hybrid setup,” Iya Trinidad, university council chairperson of the University of the Philippines – Baguio, said in a recent media briefing.

According to Kabataan Partylist Representative Raoul Manuel, 115 out of 116 SUCs will have reduced budget for maintenance and other operating expenses, while 83 will suffer from lower capital outlay, and 17 schools will have lower funds for personnel services.

The Office of the Student Regent of UP said the slashed budget should be restored as this is helpful in the retrofitting of the infrastructure and facility of state universities and colleges, especially now that limited face-to-face classes have resumed.

Meanwhile, the Office of the Vice President will receive a P2.3-Billion ($0.040-billion) budget, including the P500-million ($8.74-million) confidential funds, which was approved by the Senate last Nov. 14. The OVP’s budget has increased significantly from the former P702-million ($12.27-million) budget.

According to a 2019 statement of Senator Sherwin Gatchalian, the needed fund for the ROTC program is approximately P38-billion ($0.66-billion) annually.

Read: Back to the past: The return of ROTC

“Mandatory ROTC has nothing to do with discipline or nationalism but has everything to do with making the youth docile and unquestionably subservient towards abusive authority. Cutting the budget of SUCs yet reviving a very costly institution, both for the government and the people, like MROTC, is insanity,” said Aki Liongson, deputy secretary general of the National Union of Students of the Philippines (NUSP).

During President Ferdinand “Bongbong” Marcos Jr.’s State of the Nation Address (SONA), he urged lawmakers to enact the MROTC courses for senior high school students in order to “motivate, train, organize and mobilize the students for national defense preparedness, including disaster preparedness and capacity building for risk-related situations.”

This was backed up by Vice President Sara Duterte-Carpio, who pushed for the program to be implemented in higher education since it was previously incorporated in the college curriculum.

During the first Legislative Executive Development Advisory Council (LEDAC) meeting, Senate President Juan Miguel Zubiri stated that the bicameral Congress has agreed to pass six priority measures before the end of this year, including the MROTC bill.

In their press release, SCMP counted at least thirty-five (35) cases of human rights violations (HRVs) committed by the Philippine National Police (PNP) and Armed Forces of the Philippines (AFP) in one month from October to November.

“With gross and frequent cases such as harassment, indiscriminate firing, killings, and warrantless arrests purportedly done by military elements, no way are these human rights violators going to teach the Filipino youth about discipline and nationalism,” said Kej Andres, SCMP National Spokesperson.

The ROTC was abolished in 2002, following reports of corruption, bribery, and abuses, including the murder of 19-year-old University of Santo Tomas (UST) student Mark Welson Chua.

Manuel said, “we must fight for a budget increase to ensure the students’ rights for a safe, affordable, and quality education amid the pandemic. No to budget cuts.” (JJE, RTS)