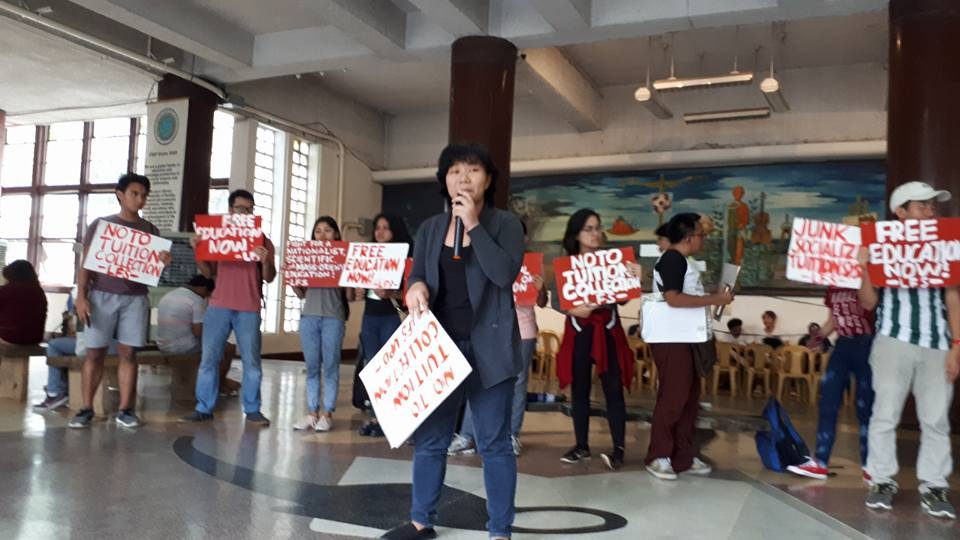 Students enraged at retraction of free tuition policy in SUCs

STUDENTS from the University of the Philippines (UP) Diliman expressed their indignation over the cancellation of the free tuition policy in state universities and colleges (SUCs).

In front of UP Diliman’s College of Arts and Letters building, students gathered yesterday and protested against the UP administration’s withdrawal of its initial announcement to suspend tuition fee collection the university.

On July 11, UP Diliman Chancellor Michael Tan officially announced the suspension of tuition collection for first semester 2017-2018. The suspension was made despite Pres. Duterte’s veto message limiting the coverage of the P8.3-billion budget for free tuition in state universities and colleges (SUCs) due to “budget limitations”. Other chancellors from different UP units also reportedly met to discuss the possibility of following Diliman’s suspension.

But in a memorandum released on August 1, UP President Danilo Concepcion announced that the initially-approved “free tuition policy” for academic year (AY) 2017-2018 would be revoked. “In the assessment of tuition and other fees, and in providing financial support to students from low-income households, UP shall use the Socialized Tuition System for AY 2017-2018,” Concepcion’s statement read.

It should be recalled that in December 2016, the Congress approved the P8.3-billion additional budget for the Commission on Higher Education (CHED) for free tuition in SUCs. However in his speech on the 2017 national budget, Pres. Duterte announced the “conditional implementation” of the free tuition policy.

CHED and the Department of Budget and Management (DBM) also released a joint memorandum in April stating that given the budget limitation, a system of priority will be put in place. Student beneficiaries of nationally-funded student financial assistance programs will be the first to be enrolled. After that, the remaining students will be prioritized based on the given bracket.

But the Student Alliance for the Advancement of Democratic Rights in UP (STAND UP) believes that the state university’s cancellation of the free tuition policy is a result of its “profit agenda”. According to the group, UP stands to earn at least P370 million from the funds of the free tuition policy (FTP). This, the student group said, is on top of the profits from the university’s Socialized Tuition System (STS) as well other miscellaneous fees.

Punzalan expressed how the UP administration and Pres. Rodrigo Duterte failed in the youth’s legitimate call for free education.

Now, the students are enraged at the Duterte administration’s removal of the P8-billion free tuition allocation in the proposed 2018 budget. Moreover, ACT Teachers party-list representatives Antonio Tinio and France Castro revealed that the budget allocation for the CHED would decrease from this year’s P18.7 billion to P12.42 billion in 2018 or a huge 33.6 percent budget cut.

Amid the state university’s decision, the students vowed to continue their protest against tuition fee collection.

The students will conduct a series of university-wide protests for the whole month, including a broad mobilization on August 31. They also plan to organize educational discussions to enlighten and gather the support of more university students on the demand for free education.