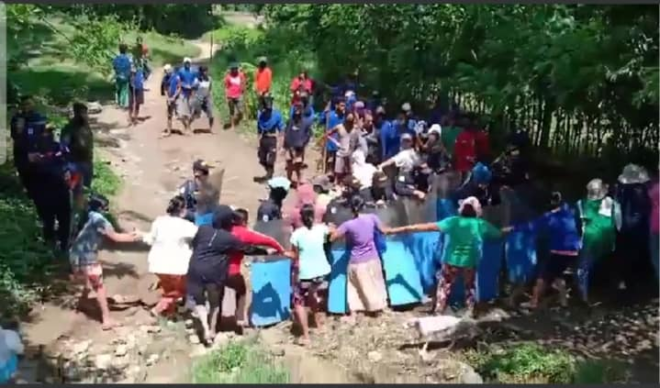 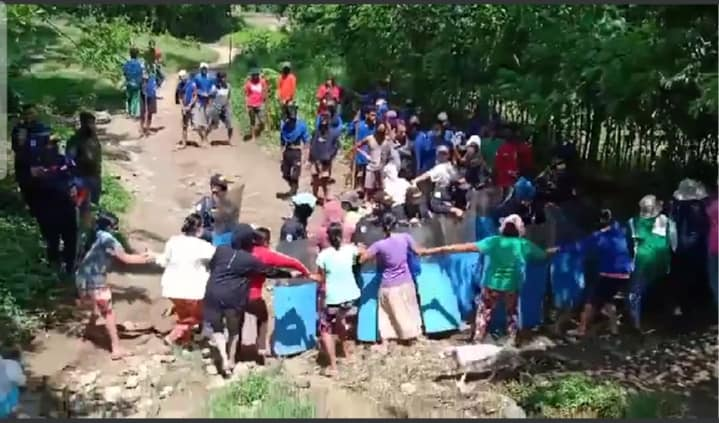 SANTA ROSA, Laguna – Rommy Torres is a farmer in Sitio Compra, Barangay San Mateo, Norzagaray, Bulacan. He was a quiet man who cultivated bananas and other root crops.

Last year, agents from Royal Moluccan Realty Holdings, inc. fenced off 75.5 ha. of disputed land and separated farmers like Torres from their crops. RMRHI has tried to stake its claim to the land since 1998, but the farmers have lived there since the 1950s.

Last February 3, Torres entered the fence to harvest his bananas. He failed to return home that day, and was found stuffed in a drum in Mabitac, Laguna, some 100 km away. He was 52 years old.

On the other side of Laguna, Leo Mangubat heard the news of armed guards employed by Ayala Land, Inc. demolishing his mother’s home in Sitio Buntog, barangay Canlubang, Calamba. Like Torres, Mangubat is a quiet farmer who planted vegetables and other crops.

Ayala Land, with the help of San Cristobal Realty Development Corporation, has been trying to get its hands on Sitio Buntog and nearby sitios since August 2020. Last year, goons burned down houses in Sitio Matang Tubig. They have done the same in Buntog since January of this year. Buntog is part of Hacienda Yulo, a 7,100 ha. estate first bought by Jose Yulo in 1948, though its residents have been there for as long as they can remember.

The stories in Sitio Compra and Sitio Buntog share many sad parallels. They are both stories of land-use conversion and violence against the nation’s dwindling agricultural communities. While peasants clamor for land reform, the Philippine government has deemed land-use conversion by large corporations as an acceptable substitute.

How did this state of affairs begin? In some ways, the Philippines has yet to shake off the feudal past it inherited from the Spaniards.
Spanish colonization brought with it a system of land division – first the encomienda, then the hacienda system. Haciendas were given to loyal subjects and religious orders, or sold to the highest bidder. Three centuries of landlordism created a class of wealthy land-owners, sustained by a majority class of poor, landless peasants.

The American period added a new dimension to the conflict – economic interest. Old haciendas were claimed by American capitalists, or by wealthy Filipinos, and cultivated for foreign export. The country’s natural resources were opened up to American investors, for the sole purpose of expanding the American empire.

This system didn’t necessarily change until the late 1970s. Foreign capitalists began merging with large businesses in the Philippines as the global market wanted less of sugar and coconut. The old landlords had little use for its farmers and began pushing them out in favor of foreign corporations and wealthy Manileños looking for a slice of suburbia.

Fast forward to today: developers like Royal Moluccan and Ayala Land become agents of the ruling class, pushing aggressive development agenda at the expense of farmers living off the land. Beneath the veneer of urban development outside Metro Manila are thousands of farmers losing their livelihoods, and oftentimes, lives, fighting for what by all means should be theirs in the first place.

Where is the government in all of this? Technically, the law is on the farmers’ side: Sitio Compra has been subject to land reform since 2006. Sitio Buntog’s CARP exempt status, meanwhile, has a pending motion for reconsideration. Truth is nowhere near reality, however.

Meanwhile, agencies like the Department of Agrarian Reform are slow to act. More often than not, farmers find themselves disappointed at DAR’s decisions.
Farmers are thus faced with two choices: be quiet and accept their fate, or speak up and fight back. For Torres, Mangubat, and so many others, the choice seems obvious.

But obvious choices are not easy ones. Mangubat has not returned to Buntog since January, and his children sometimes ask why he keeps fighting when he can just as easily move out. Torres, meanwhile, has paid the ultimate price.

Others take a different path. In Macalelon, Quezon, coconut farmers struggle with low prices of coconut and copra while the National Irrigation Authority threatens to displace them to make way for a dam. The Philippine Army’s 201st Infantry Brigade ensures the success of the project by pointing their guns at those who’d dare fight back.

Ronel Batarlo and his family were one such example. When he was seven, they had to leave Macalelon out of fear that the soldiers would kill them. He saw the same situation in other towns too, from Lopez to Catanauan.

When he was older, he was faced with the same choice Torres, Mangubat, and so many other farmers face – keep quiet, or fight back?

He chose to fight, but not as a peasant organizer. Left with no other option, Batarlo dropped his sickle and picked up the rifle. He became Ka Marwin in the New People’s Army (NPA), which has been waging an agrarian revolution since its establishment on March 29, 1969.

Ronel Batarlo met his fate in an encounter last February 5. Like Rommel Torres, he was a martyr of the people. Like Leo Mangubat, he risked everything he had for his fellow farmers. He may have died, but he died a hero for all farmers, and for all the country’s oppressed.

Unless something is done in the way of genuine land reform, these stories of struggle will continue. So long as corporations like Ayala Land and Royal Moluccan continue to take away land for selfish interest, farmers will continue to fight back.

Myles Albasin & the Mabinay 6: Three Years and Still in Jail