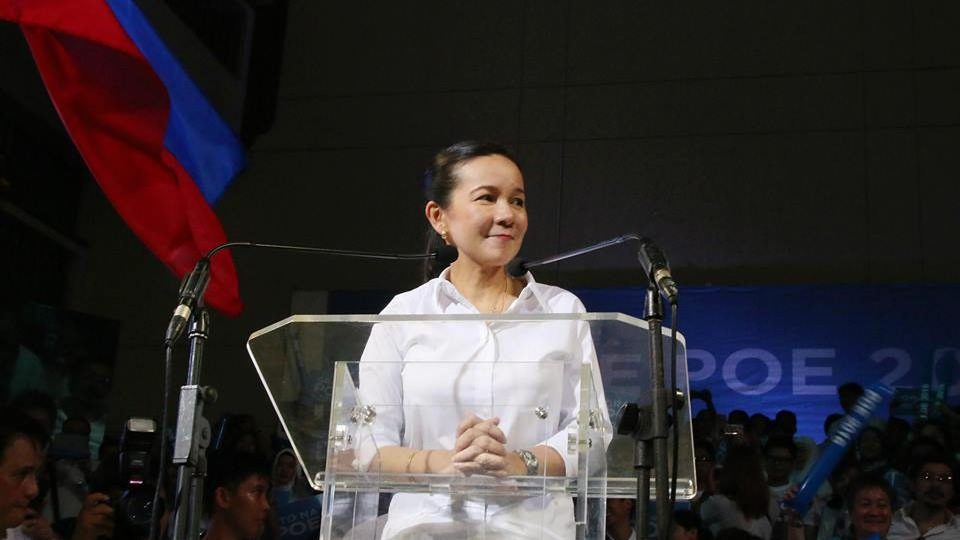 With several weeks left before the official filing of candidacy, voters have yet to hear substantial talk on the platform of governance raised (or not raised) by those who have already declared their intention to run for higher office in 2016, especially for the presidency and vice-presidency.

The latest to declare her intention to run is Senator Grace Poe, and headlines in the wake of that are still centered on issues regarding her citizenship (with a DNA test as the latest twist), and whether it is “too early” for her to become president. These stem from a sensationalized remark by her actress cousin Sheryl Cruz and of course, from disqualification cases on technical grounds presumably thrown her way by political opponents.

That Poe presented an initial 20-point platform when she publicly announced her candidacy last week is a welcome step. She promised to lower tax rates and power costs, mechanize agriculture, “examine” if workers and employees were receiving fair wages, pursue peace talks with all groups, improve the traffic situation, provide legal assistance to OFWs, support arts and culture, and defend the West Philippine Sea, among others. At least voters have something concrete by which to judge her candidacy on. While it has been pointed out that parts of her platform sound like “motherhood statements” that many politicians have said before, her declaration speech had more substance in terms of platform of governance, than rival Mar Roxas’ acceptance speech upon the endorsement of President Aquino last July (as if that alone was enough reason for voters to propel him to the presidency).

Interestingly, except for the issue regarding her citizenship, most criticisms hurled at Poe could be said of her political opponents as well. A stark example is Benigno Aquino III himself, who was also perceived as lacking experience and merely riding high on the popularity of his parents when he ran for president. The same could also be said of political newcomer Leni Robredo, who the Liberal Party is considering for Mar Roxas’ running mate as vice-president. Like Poe, the only seeming value of Robredo as a candidate is a “clean” image also inherited from a popular family member, her husband former Interior Secretary Jesse Robredo.

The problem with an electoral race that always has more to do with the “image” of the candidate than with his or her platform of governance is that even platforms are being “packaged” in such a way that is devoid of any real meaning for voters, except for the often deceptive meaning that powerful political machineries want them to take on. Take “Daang Matuwid.” You have Liberal Party stalwart Senator Franklin Drilon telling Poe that “Daang Matuwid” is Roxas’ platform and that she should “go find her own.” When in fact, what exactly is “Daang Matuwid”?

The Aquino administration has spent the last six years packaging “Daang Matuwid” as “reforms” that will bring about “inclusive growth” and eradicate corruption. But none of these “reforms” have actually benefitted the Filipino majority—ordinary wage workers, landless farmers, and OFWs, for instance—and have generally worsened chronic poverty. His anti-corruption drive extends only to his political opponents, and have served to insulate himself and his closest allies from corruption charges under their own use of the pork barrel system. The fact is, “Daang Matuwid” is a set of neo-liberal economic and political policies that for the past six years have primarily served the interests of the elites in government and business.

So when Poe, in her declaration speech, said that Aquino does not have a monopoly of “Daang Matuwid,” what exactly does she mean? Is she content with how Aquino has run the government? How different is the “Bagong Umaga” platform that she has to offer? What is her response to the claim of Edwin Lacierda, Palace spokesperson (who is now being criticized for using public funds to act as Mar Roxas’ spokesperson), that Poe’s platform is “already being carried out” by Aquino? Does she agree or disagree? Why or why not?

Right now, the electorate deserves talk that goes beyond merely the rise and fall of survey ratings, or of tired arguments that are image-centered and do not touch on platforms and policies. Then again, such has always been the nature of our presidential elections: an image game mostly decided upon by the elites, who have long drawn up the rules and picked the players themselves such that whoever wins, they (the elites) also win. The only chance the people have of ever gaining anything from the exercise is to demand concrete, clear stands or program of action on specific issues, for which the candidate can be judged and held accountable for, should they be elected to office.