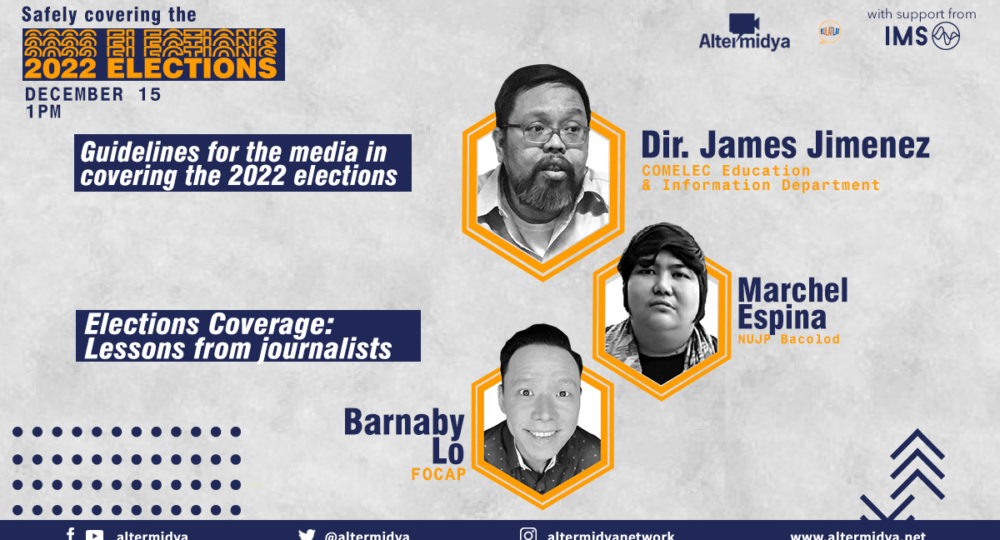 In the first part of the webinar, speakers talked about election coverage lessons in the 2009 Ampatuan massacre, which the Committee to Protect Journalists has dubbed as the “single deadliest event for journalists in history.” Speakers included Lito Averia, IT consultant for the National Citizens’ Movement for Free Elections (NAMFREL), Kath Cortez of Davao Today, and JB Deveza, former National Union of Journalists of the Philippines (NUJP) Mindanao Safety Officer. (Read more here.)

In the second leg of the two-part webinar conducted last December 15, the discussions revolved around the experiences of journalists who worked on the ground and covered past elections, and the Commission on Elections’ (COMELEC) revised guidelines on covering the polls.

Speakers for the second leg included COMELEC spokesperson and Education and Information Department director James Jimenez, Marchel Espina of NUJP Bacolod, and Barnaby Lo of the Foreign Correspondents Association of the Philippines (FOCAP).

The second webinar was prefaced by a reintroduction of the “Wag Kukurap” campaign pledge, which was launched in July 2021. Veteran journalist Roby Alampay read the pledge signed by various Philippine media organizations including Altermidya Network, the Asian Center for Journalism, Center for Media Freedom and Responsibility, Center for Community Journalism and Development, NUJP, Philippine Press Institute, Philippine Center for Investigative Journalism, Photojournalists’ Center of the Philippines, and many others.

‘Safety has always been an issue’

With social media entering the scenario, safety issues faced by journalists have drastically changed for the worse, Lo noted. “There has been an increase in harassment against journalists. We can expect that there will be more during the election campaign period,” he said.

Lo added that “much of the unregulated information we see today” has long been thriving in online spaces, and it is a challenge for the media to catch up and fight disinformation.

Apart from imminent safety threats, Lo also underscored that this is also the first time that journalists are going to cover the elections under a pandemic, noting that on top of the coverage guidelines from COMELEC, journalists must also be equipped in facing the health risks involved in covering the elections on ground.

“We have to keep doing our jobs as safely as we can,” Lo stressed.

Marchel Espina of NUJP Bacolod shared the difficulties faced by journalists as the COVID-19 pandemic rages on.
Espina said the upcoming polls will be a challenge for journalists to reach their target audience, especially as the bulk of Filipinos remain largely at home due to the pandemic. “Even in online journalism, we should practice practical citizen-oriented information. We should educate our followers on the electoral process especially on the candidates’ stand on certain policies,” Espina explained.

“We should not be spokespersons of a certain party or candidates,” she added.

Covering the elections also opens journalists to ethical issues, Espina stressed, noting that many media practitioners have low salaries, which public officials and candidates often take advantage of. “You have to put the fine line there,” Espina said, “Journalists should mind the conflicts of interest that would undermine the credibility of the outlet.”

Espina also noted that providing context to every report is every journalist’s key responsibility, noting that issues such as election-related violence or political rivalry – especially in the provinces – have underlying causes which journalists should always uncover. “We must know these things to provide a context to our readers,” she stressed.

For his part, COMELEC spokesperson James Jimenez shared the official guidelines for media practitioners in covering the upcoming 2022 elections. The guidelines include the following:

Jimenez stressed that not following the guidelines could lead to the forfeiture of a journalist’s media accreditation. “With the conditions being as they are, binabalanse namin ang freedom na dapat ine-enjoy ng media versus yung pangangailangan sa orderly administration of the elections na hindi mae-endanger ang mga botante,” he explained.

Jimenez added that COMELEC understands the essential role of the media during the elections, which is to provide the public with essential information. He challenged journalists to hold the 2022 electoral candidates to account by “reporting their actions, calling out their misrepresentations, and interrogating their promises.”

Responding to COMELEC’s challenge, Lo encouraged his fellow journalists to provide more in-depth reports in the upcoming polls. “We should unpack the platforms of the candidates more…because that is what matters,” he quipped.

One month into ST Odette, urgency for ‘ayuda’ highlighted