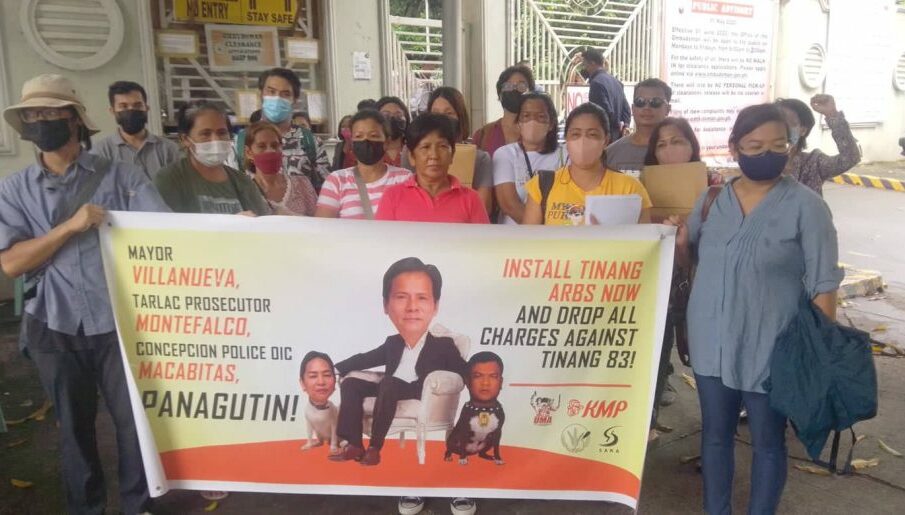 Tinang 83 members after filing charges against the PNP. (UMA photo)

Tinang 83 farmers and supporters filed six charges against the Concepcion (Tarlac) Philippine National Police (PNP) at the Office of the Ombudsman on Tuesday, July 26, in connection with their violent mass arrest last June 9.

The farmers and their supporters filed Violation of Rights of Persons Arrested, Detained, and Under Custodial Investigation; Perjury; Unlawful Arrest; Arbitrary Detention; Physical and Mental/Psychological Torture and Other Cruel, Inhumane, Degrading Treatment or Punishment; Grave and Serious Misconduct and Conduct Prejudicial to the Best Interest of the Service; and Grave Abuse of Authority and Oppression against the police.

At least 30 personnel of the Concepcion PNP, led by Lt. Col. Reynold Macabitas, were named respondents.

The complainants asked the Ombudsman to remove the policemen from service and issue a preventive suspension against them while the investigation is ongoing.

The charges the farmers filed is in response to what they say was very cruel treatment they suffered on their arrest, four-day imprisonment in crowded and humid jail cells and at the police head-quarter’s parking lot, and the seven of charges filed against them in quick succession by the police in collaboration with the Tarlac Provincial Prosecutors’ Office.

On July 7, several members of the Tinang 83 filed administrative complaints against Tarlac Assistant Provincial Prosecutor Mila Mae Montefalco before the Department of Justice for grave and serious misconduct, gross ignorance of the law and procedure, and conduct prejudicial to the best interest of the service. Tinang 83 members and lawyers trooped to the Office of the Ombudsman to file six complaints against the Concepcion PNP. (UMA photo)

The police charged the farmers and land rights advocates a total of seven criminal complaints after the arrests, including malicious mischief, illegal assembly, obstruction of justice, disobedience to authority, usurpation of real rights in property, human trafficking and child exploitation charges.

They were conducting a land cultivation activity when mass arrested by the police.

The Department of Agrarian Reform later released a list that named the farmers as legitimate beneficiaries of the property known as Hacienda Tinang.

The Capas Municipal Trial Court has dismissed the illegal assembly and malicious mischief charges against the farmers.

The Unyon ng Manggagawa sa Agrikultura said the counter charges against the police are “just, urgent, and true—the opposite of those filed by the police against the Tinang 83 upon being prodded by Mayor and land-grabber Noel Villanueva.”

Villanueva, then congressman and Concepcion mayor-elect, was present during the incident and was seen to have ordered the police to arrest the farmers and their supporters. An Office of the Ombudsman personnel receives copies of the Tinang 83 complaints against the police. (UMA photo)

statement that holding “Villanueva and his lackeys” accountable is timely and deserved.

Lozande said that government officials like Villanueva treat the police and the military like their private army, bending the law to serve their own profiteering interests.”

“This is an important wake-up call to bureaucrats and the people at large, alerting them to that fact that CARP (comprehensive Agrarian Reform Program)has repeatedly failed farmers, and its failure has benefitted no one but land-grabbers,” Lozande said. # (Raymund B. Villanueva)