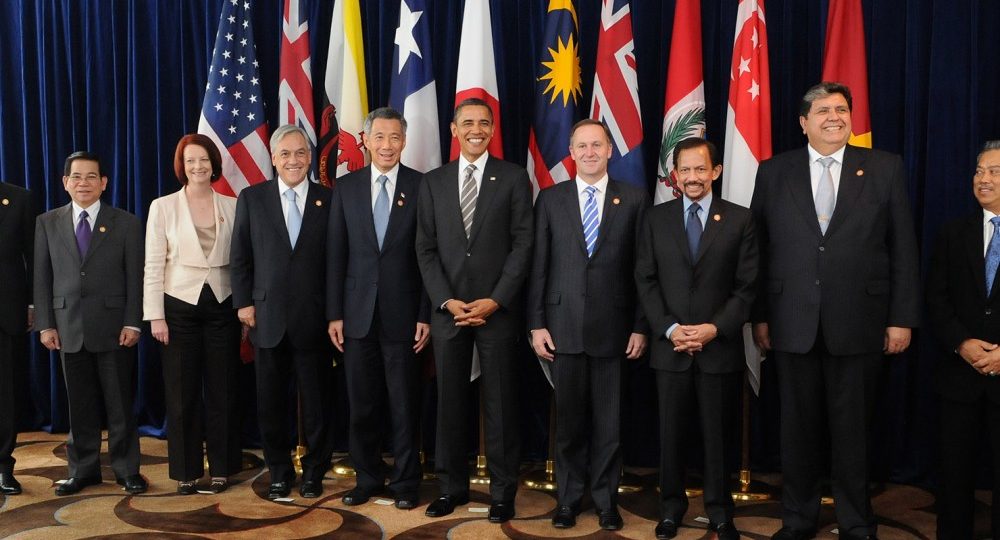 The full text of the controversial Trans-Pacific Partnership (TPP) agreement was finally disclosed after years of being negotiated in utmost secrecy. The public, including the US Congress itself, were kept in the dark on the details of the US-led trade pact until it was approved by the 12 member-countries in October.

The TPP has been met by protests not just for the lack of transparency in the talks, but for its push for higher liberalization covering an unprecedented scope of trade and investments. Across the region, people are opposing the agreement for its utter bias for giant corporations, especially for US businesses. They warn against how alarmingly invasive the TPP is, and how it will remove the sovereignty of signatory countries in favor of corporate interests.

The ongoing APEC meeting in Manila will host US Pres. Obama along with other world leaders. Although the TPP isn’t on the formal agenda, it will surely be on the sidelines of the two-day APEC talkfest.

The TPP, which has Australia, Canada and Japan among its members, is the centerpiece of the much-publicized US pivot in the region, or what it considers a means for “American leadership in Asia”. The US needs trade deals like the TPP to expand its leverage in the region and give US investors a bigger advantage in Asia. The agreement is also strategically important to the US as a way of containing emerging economic giant China. The latter, which also seeks a regional free trade bloc, formed the 16-country Regional Comprehensive Economic Partnership or RCEP that excludes the US.

It seems that the US is rewriting the rules of trade and investments in what it calls the “gold-standard 21st-century” agreement. The 5,500-page text reveals that the TPP goes beyond the usual trade agreements we’ve seen so far. The TPP allows corporations to intrude in every possible economic activity. It gives corporations extreme rights to protect their profits, which could overrule the regulatory powers of governments. It takes away the authority of the state to protect its citizens and restricts space for the government to create policies towards development.

On trade itself, the deal seeks to remove tariffs on almost all products, which will spell more doom for the local production sectors and lead to more closures and job losses across the region. Outside trade, the TPP compels its members to ease investment regulations and allow companies to acquire assets and move their capital and profits without restraint. The agreement relaxes restrictions in services to allow foreign companies to invest in public utilities and practically all public services.  It calls for greater privatization that will result in even more expensive rates for power, water, etc. and higher out-of-pocket costs for health and education. The agreement also clips government’s control over financial flows to the economy, making the region more vulnerable to short-term and speculative capital.

And while it demands countries to ease their protectionist measures, the TPP imposes strict safeguards to holders of so-called intellectual property and allows them greater monopoly through copyrights, patents, and trademarks. The deal requires member countries to amend their laws and to grant monopoly to holders. This is a serious threat to access to medicines, for instance, because it will limit the production of generic medicine and drive up drug prices. It will similarly give tighter protection to other technologies.

To top it all, the TPP allows corporations to sue governments in an investor-state dispute settlement system if government fails to guarantee their profits, whether real or projected. Corporations can challenge governments if certain state rulings hurt their business or if they are not given “fair treatment”. This dangerous provision demands governments to uphold the so-called rights of foreign investors over the citizens’ interest. Aside from using public resources to ensure corporate profits, we have seen how expensive dispute settlements are. In the arbitration cases entered into by the Metropolitan Waterworks and Sewerage System (MWSS), the cost of proceedings alone have totalled more than P140 million in taxpayers’ money.

The TPP is a destructive and dangerous deal that clearly gives license for corporations to dominate and profit from economies. It would be foolish for the TPP member nations to vote on passing legislation to enact the controversial agreement.  The Philippines is not a member, but the Aquino administration is unlikely to listen to the growing public opposition to the TPP from other signatory countries. After all, it has been pushing for the Philippines to join the TPP since 2010 and has been receiving millions of dollars from the US government to work on qualifying for the TPP. It’s really up to the Filipino public to resist and pressure the policy-makers to walk away from this evil deal.

APECtado episode #5: A World without APEC