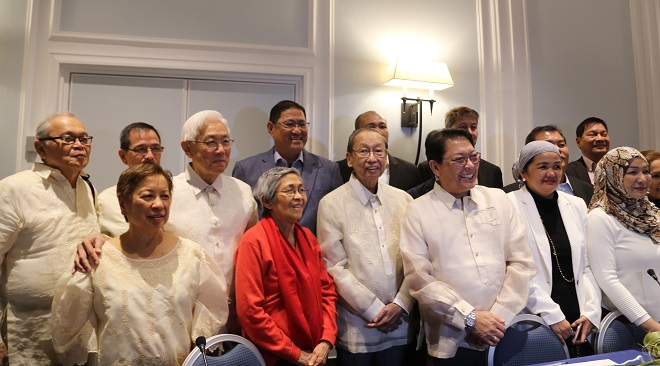 Rome, Italy – The National Democratic Front of the Philippines (NDFP) formally raised its complaints over the government’s violations of previously signed agreements as the third round of peace talks between the NDFP and GRP opened today January 19.

“Our panel comes to this third round ever ready to push the negotiations forward,” said NDFP negotiating panel chairperson Fidel Agcaoili in his opening statement. ”But it is also mindful of certain serious obstacles that remain to be hurdled if mutual trust and confidence are to be maintained so that the negotiations can move forward.”

The NDFP said in a statement the continued violations of the Comprehensive Agreement on Respect for Human Rights and International Humanitarian Law (CARHRIHL) and the Joint Agreement on Safety and Immunity Guarantees (JASIG) have placed in serious question the sincerity of the GRP. The NDFP thus requested the compliance to previous agreements as the first item to be discussed in the third round.

After this, the Agcaoili said they can proceed with the main agenda of discussing the drafts on socio-economic reforms, and on the political and constitutional reforms. During today’s opening, both parties expressed optimism that the six-day negotiations would make important gains on these two drafts.

Among the violations of the CARHIHL is the continued detention of nearly 400 political prisoners who have been charged and detained on trumped-up common crimes. “We clearly state that the release of these political prisoners should not be seen as a mere confidence-building measure or as a gift to the NDFP,” he said. “It is an obligation of the GRP under CAHRHIHL.”

Neither should political prisoners be treated as trump cards to extract concessions from the NDFP, Agcaoili added. “Such conduct is bound to further erode mutual trust and confidence,” he said, referring to Pres. Duterte’s repeated pronouncement he will not release political prisoners unless a signed bilateral ceasefire agreement is delivered to him.

Three JASIG-protected NDFP consultants who were convicted on trumped-up charges, namely Eduardo Sarmiento, Emeterio Antalan and Leopoldo Calozo, also remain in jail. According to Agcaoili, this is a clear violation of the JASIG and CARHIHL, as well as the commitment made by Pres. Duterte that he will grant pardon to the three consultants.

Also violating the CARHRIHL is the continuing military operations in rural communities, which the NDFP has repeatedly raised since the government declared a unilateral ceasefire in August. “Military and police forces continue to conduct military operations in more than 43 provinces and 146 municipalities across the country, terrorizing communities under the guise of peace and development projects of Oplan Bayanihan and Oplan Kapayapaan,” the NDFP stated.

Despite reported violations in the unilateral ceasefire, GRP negotiating panel chairperson Silvestre Bello III expressed hope that a bilateral ceasefire agreement will be forged in the next few days of discussions.

“I am one with Pres. Duterte’s optimism that in this round of talks, we are able to finalize and approve the joint ceasefire agreement. Towards this agenda, the GRP panel has come prepared to exchange and discuss our drafts,” Bello said.

For NDFP chief political consultant Jose Maria Sison, the unilateral ceasefire declarations of the GRP and NDFP can be easily turned into a more stable bilateral ceasefire if the Duterte government complies with the CARHRIHL. Agcaoili also reminded the GRP that, like in the past, the peace talks could still continue even without a ceasefire agreement.

But for the peace negotiations to advance meaningfully, the NDFP panel chair reiterated that the GRP should first show its sincerity in the negotiations by honoring previous agreements. “If previously signed agreements are not honored, what guarantee does the NDFP have that future agreements would not be similarly violated by the GRP?” he asked.

Both the NDFP leaders expressed their willingness to forge mutually-acceptable agreements on socio-economic and political reforms. According to Sison, the peace process is one of the best ways for Duterte to prove in real and concrete terms that “he is truly a patriotic and progressive president and fights against imperialist and oligarchs for the benefit of the people”.

Report by Altemidya/Raymund B. Villanueva