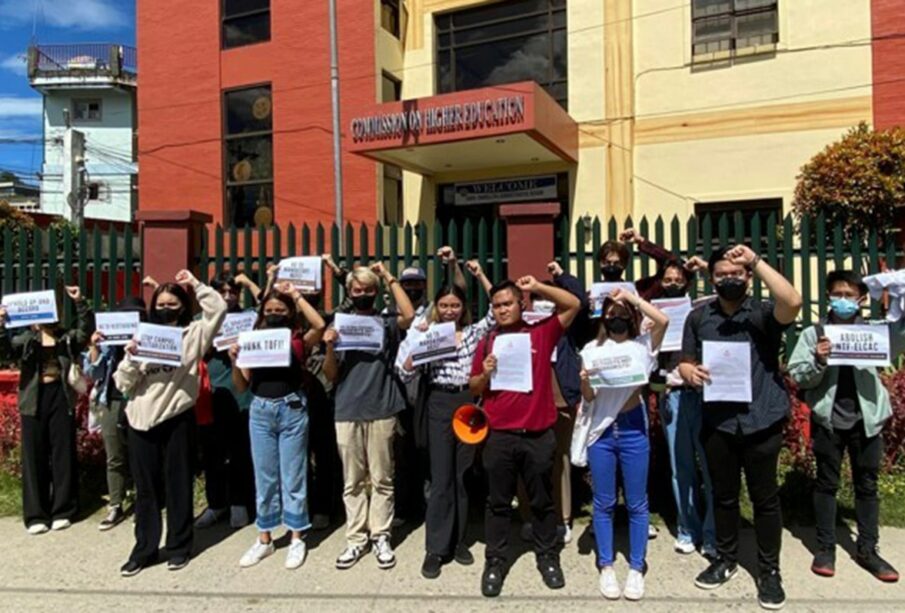 BAGUIO CITY — The National Union of Students in the Philippines (NUSP) Baguio-Benguet urged the regional office of the Commission on Higher Education in the Cordillera (CHED-CAR) to withdraw its memorandum endorsing a Regional Task Force to End Local Communist Armed Conflict (RTF-ELCAC)-initiated activity.

In a letter submitted to CHED-CAR on Thursday, November 17, the group scored the conduct of the Cordillera Youth For Peace Convergence (CYPC) in their schools. Instead of promoting peace, the activity has become “a platform for misinformation, false claims and accusations, red-tagging, and terrorist-labeling,” according to the student organization.

NUSP Baguio-Benguet chair Franz Calanio told Rappler that they requested an audience with CHED-CAR Director Demetrio Anduyan, Jr. However, the office told them to wait for his call for a dialogue.

NUSP Baguio-Benguet cited the November 8 CYPC at the University of Baguio, where a speaker tagged several organizations as youth fronts of the Communist Party of the Philippines-New People’s Army (CPP-NPA).

NUSP was among the groups named in the presentation with the League of Filipino Students, Anakbayan, College Editors Guild of the Philippines, Kabataan Party-list, and Student Christian Movement.

Anduyan endorsed the activity through Memorandum 124-2022, issued on September 15, upon request of National Intelligence Coordinating Agency CAR Director Alden Juan Masagca. The confidential letter from the intelligence office was dated September 16 and stamped ‘received’ by CHED-CAR on September 19.

“Cognizant the said undertaking is part of our government’s effort in the promotion of peace and security in our land, the Office hereby requests your cooperation,” said the memo addressed to the heads of higher education institutions (HEIs) in the region.

Masagca explained in his letter that CYPC intends to “deliver the Orientation on the CTG (communist terrorist group) Youth and Student Recruitment (OYSTR) for HEI students.”

Calanio said that the content of the CYPC lecture was “technically illegal,” citing the Baguio court order related to the Writ of Amparo petition filed by four youth leaders. The directive prohibits tagging the petitioners and their organizations as communist front organizations. The petition mentioned two of those named in the November 8 presentation – Kabataan and NUSP.

The NUSP chair said that “the purpose and content” of the RTF-ELCAC activity “are the same as last year,” referring to the two-day online forum in September 2021, which CHED-CAR also endorsed.

“We want to stress that they (CHED) should take accountability for this and retract the memorandum. This is not the first time that the office issued a memorandum encouraging military and police [activities] in our schools that turned into red-tagging sessions,” Calanio said.

“We reiterate that red-tagging and fascist mindset have no place in universities. We also challenge CHED-CAR to stand up for students’ rights and uphold academic freedom,” he added.

Instead of endorsing activities that result in communist labeling of legitimate organizations, NUSP Baguio-Benguet urged CHED-CAR to focus on ensuring the safe resumption of classes.

It also urged the office to probe incidents of red-tagging and rampant democratic rights violations in schools. The group also called for the institutionalization of agreements between state security forces and HEIs like the University of the Philippines-Department of National Defense accord.# nordis.net