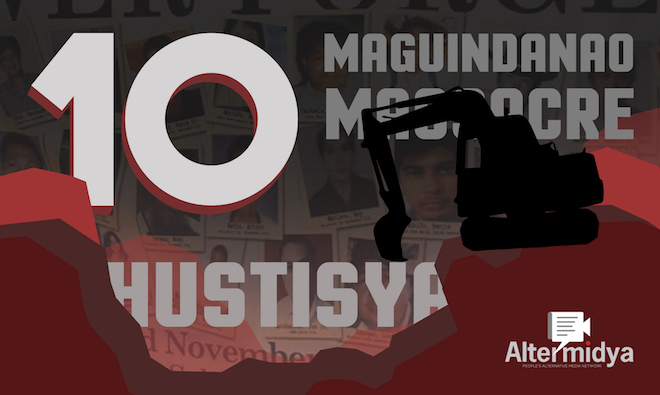 IT HAS BEEN A DARK DECADE of injustice for families and loved ones of the victims of the Ampatuan massacre, which killed 58 individuals, 32 of them journalists.

A decade of unbearable grief and pain, as they watch the masterminds of the world’s single deadliest attack on journalists flex political power to evade justice for a crime most heinous, all the while dealing with a personal loss too great for many of us to fathom.

It has been a dark decade of impunity for journalists, as they watch colleagues get threatened and killed by the coercive power of the nation’s ruling class, all the while doing their best to fulfill a duty to the public to report the truth, no matter the consequences to their personal safety and security.

For the past 10 years, we have seen a corrupt and failed system—the very same one that allowed such a senseless organized crime to even be possible—at work to give the best possible advantage to the perpetrators: with many of the 197 originally accused still at large, with the principal suspects the Ampatuans being allowed special favors, with witnesses being bribed and threatened, with the unreasonable delays in the judicial process.

At the same time, we have also seen how the victims’ families, their lawyers, witnesses, and supporters have stood their ground. Despite being threatened with their lives, they have shown us the real meaning of courage: to speak truth to power, even one with an active private army and a web of close relationships with top politicians. They have shown great stamina, pursuing justice relentlessly, even if some have forgotten the gruesome story of how 58 innocent people were gunned on the spot and buried with a backhoe in the rolling hills of Barangay Salman, Ampatuan, Maguindanao province. Because the Ampatuan Massacre isn’t just another gruesome crime story—it was, and remains, the starkest symbol of the death of press freedom and the reign of impunity in this country.

But the end of of this story is yet to be written. The promulgation of the case is set at any moment; now is the time to make our calls for justice ring out as loud as possible.

Altermidya- People’s Alternative Media Network joins colleagues in calling for the immediate conviction of the suspects in the Ampatuan Massacre, particularly the principal suspects, brothers Andal Jr., Zaldy and Sajid Ampatuan. Anything less is unacceptable and would unleash a storm of wrath, not just from the victims’ families and loved ones, but from the greater public, including the media community here and abroad. An attack on one of us is an attack on us all. Justice for 32 of us is justice for us all.

The delivery of justice for Ampatuan Massacre victims will act like a beam of light shone into a great darkness that is the escalating climate of fear and impunity under the Duterte administration. We anticipate it with utmost vigilance and hope.

A year into Memorandum Order 32: Violence in Samar and Leyte intensifies