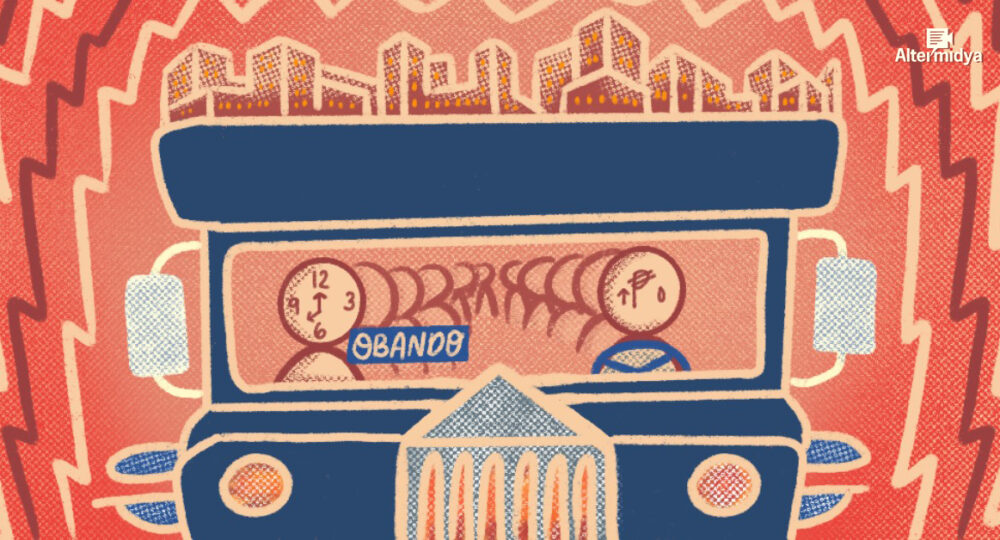 Commuters from the coastal town of Obando, Bulacan, will tell you that Manila “feels closer” than other cities in its own province.

Locals informally consider Obando the” hidden 18th locality of Manila”. In fact, it historically shared its geography with portions of Valenzuela and Navotas.

Some 16 kilometers away from the actual capital of Manila, thousands of residents from Obando’s population of 59,000 find work out in the Metro. Its municipal fishport and public market—the center of commodity exchange locally—simply doesn’t offer enough work opportunities for 11,000 average households of five.

Neither does the town’s business sector provide a dent on the mean household monthly income of P9,000, which is below the minimum threshold for a family of six set by the Department of Social Welfare and Development.

Suffice it to say, some Obandeños consider interregional traffic a necessary sacrifice. The daily commute is a cross that residents carry.

UK-based think-tank Centre For Cities defined commuter towns as “towns which are within a relatively easy commuting distance of our cities and which are attractive to commuters for that reason.”

Obando is only one of many commuter towns dotting the capital region’s neighboring provinces, which altogether form the Greater Manila Area.

Just as Bulacan commuters come from the north, CALABARZON’s Cavite, Laguna, and Rizal locals travel from the south and east. This contributes to the metro’s 12.9-million population swelling to a daytime population of 16 million to 18 million, adjusted for commuters.

Centre For Cities said that places regarded as commuter towns are assumed to have weak local economies, “in which residents do little more than live and sleep, choosing to work and play some distance away in the nearby metropolis.”

Notwithstanding, commuting all the way home can ironically be the most efficient option, according to Obando local Rona Santiago, who has been commuting for nearly two decades since her college days up until she began working in Makati.

Her daily commute to the workplace takes five hours in total, two hours going to work and three hours going home. In one occasion, she spent five hours commuting just one-way from her Makati office to Obando.

Commuting patterns in Metro Manila show that most commuters use a variety of transport modes, with an average of two to three transfers between these, according to a 2014 study in the Transport and Communications Bulletin for Asia and the Pacific.

This corresponds with the experience of Santiago, who usually transfers from three vehicles to and from work. Sometimes, she even uses four transportation modes to get home, like when jeepneys in her regular route are unavailable.

Although she has considered moving closer to work, her main consideration is her family. Leaving the province would mean taking her children to the city, where she doesn’t have other family members to watch over them and provide a sense of security.

Furthermore, Manila is known for its soaring rent prices. In fact, only the high-income economy of Singapore recorded higher rent prices than Manila in the region, despite the Philippines being known as a developing nation, according to e-commerce aggregator iPrice Group.

Its 2021 research, which gathered the estimated monthly cost of living in six of Southeast Asia’s popular cities, found Manila has the lowest average salary, second-highest rent prices, and third most expensive cost of living.

The Philippine capital’s average monthly salary was only around P18,900 against a P50,800 estimated monthly cost for a single person. Without rent, the total monthly cost of living still reached about P28,800.

All of these collectively translate to commuter town locals reporting significant savings on food, laundry, rent, and other regular expenses.

However, Obando commuters are recently finding their respite short-lived. Traffic-free Manila is a thing of the past, as pre-pandemic levels of congestion across different transportation modes are back—and even worse.

Santiago said that commuting is actually harder now than during the pre-pandemic. She previously had access to 15 Makati-bound van options, which have now been reduced to only nine vans.

Routes became defunct and drivers left their posts. As much as 30 percent of operators were affected or even went bankrupt, Siy estimated.

This remains felt today with the public transport supply unable to meet the travel demand.

In the Monumento-Paco (Obando barangay) jeepney terminal in Caloocan, lines stretching at least a couple of rows are a common sight from 5 p.m. onward. The terminal is usually the last stop for the day for Obando commuters headed home.

But it is not the length of the lines that intimidates commuters but the fewer rides and longer waiting. Some residents report booking taxis or habal-habal (motorcycle taxis), as well as using ride-hailing apps, when the jeepneys stop arriving. These can cost as much as P500 for a single trip to Obando.

On the evening of July 18, for instance, heavy rain worsened the usual floodwaters, which led to over a hundred stranded commuters lining up in four long rows along the street.

Many turned to social media at the time. While some requested help, others aired their frustrations in social media groups. These included hate speech and verbally abusive comments directed toward jeepney drivers, blaming them for being too “selfish” to head out and fetch the stranded commuters.

The misplaced blame has been hurtful and even demoralizing for drivers, according to Glenn Guevarra, head of the Monumento Obando Paco Jeepney Operators and Drivers Association (MOPJODA) Inc.

He explained that there’s a certain level of floodwater that will automatically turn drivers away unless it subsides, notwithstanding any potential earnings.

Guevarra wants commuters to know that the rising costs of fuel and other commodities that adversely affected them also extends to jeepney drivers. These drivers have suffered heavier expenses that effectively cut down their take-home pay. One even said that their daily earning of no lower than P800 pre-pandemic has now sunk to only around P500 at most.

In fact, the MOPJODA leader said the number of operating jeepneys dwindled by more than half from 120 pre-pandemic to only 54 in the present: a 55-percent drop. Additionally, just around 30 drivers are currently active.

He explained that higher diesel prices estimated at P470 for five liters—the amount of fuel consumed per cycle between Obando and Monumento—means a local driver has more to lose than gain if they keep setting out to fetch only a handful of passengers all the way to Caloocan.
Thus, they won’t hit the road if breaking even is not guaranteed.

Now, the once-24/7 route has a “curfew” nowadays. The trip cycles end not much later than 11 p.m., or even hours earlier depending on the remaining commuters at the Monumento terminal.

Since the number of commuters is out of their control, Guevarra said their main call is for the government to curb fuel prices. He expects that if the rate per liter returns to P40, the number of jeepney rides would increase to benefit both drivers and commuters.

He added that they’re appealing to the local government to provide financial assistance that would supplement drivers’ expenses in times of crisis so they can fetch stranded Obando commuters.

Siy proposed that the government provide subsidy to PUV operators through service contracting to pay directly for fare revenues, citing the examples of London and Singapore.

If this is not possible, he said the bare minimum is for policymakers to raise fares to allow transportation to be sustainable. Otherwise, the risk is losing more public transport services and compounding the already poor conditions of commuters.

Siy added that the private sector should keep allowing work-from-home telecommuting arrangements, if possible, to alleviate the struggles of commuters. He also observed a recent trend where some Filipinos preemptively choose their schools and workplaces based on location or convenience.

He concluded that any lasting solution beneficial for metro-bound commuters requires the cooperation of both the national and local governments. “LGUs especially know their constituents best, meaning they are in the position to formulate mid to long-term policies that would address their needs.”

Santiago as a commuter town resident has lamented how the national government’s traffic policies are Manila-centric.

She suggested localized solutions like more flexible routes to accommodate drivers who must circumvent unavailable roads, as well as a single transport terminal with a trip schedule that would provide commuters the option to easily transfer routes if needed.

The Obando local administration under Mayor Leonardo “Ding” Valeda has also recently been noted for mobilizing resources to benefit residents. It reportedly sent out vehicles to directly fetch the stranded commuters in at least one instance on August 5.

Ultimately, the main distinction between commuter towns in the third-world Philippine context and their first-world counterparts is the government’s decisiveness for urban planning, according to IBON Foundation executive director Sonny Africa. He cited how this was key in both the United Kingdom’s relatively more public transport-oriented system and the United States’ super privatized transport system model.

He said the capital region was a good case in point since it has private developers congesting within Metro Manila, because it’s where the markets and infrastructure are. These include telecommunications, water, and power.

“Even the term ‘afterthought’ is too strong. Afterthought means parang pag-iisipan mo pa… We’ve never actually encountered any conscious effort by the government to create communities of people na nagtatrabaho in the central area ng NCR,” Africa said, adding that any commuter towns in the Philippines are incidental rather than by design.

The economist said serving the populations of such areas means the government should invest in mass transport solutions that ultimately minimize both public investment and environmental costs. This can include high-speed railway network built around commuter towns into the metro.

For the short-term, Africa suggested that the Philippine government implement a fixed fuel subsidy to service both jeepney drivers and operators so as to keep them from shuttering operations.

But a possible long-term solution, however, is to decongest the metro by creating centers of economic activity in the provinces.

“The best attitude toward the commuter towns is it is necessary to decongest, but the ideal is clusters of economic activity and people living more or less around where they work,” Africa said. He said the government should initiate this change by building government offices in the provinces. Then the private sector—malls, businesses, schools, and the like—would follow suit, creating opportunities closer to provincial residents.

“Maglabas ka ng economic activity from Metro Manila according to appropriate na clustering niya… Kailangang alisin from Metro Manila. The government has to step in to jumpstart that process. Because people are rational, people live where it’s convenient for them,” Africa concluded.

But for now, the Obandeño doesn’t have a prayer pending any real transport interventions. Until concrete solutions are implemented to alleviate the plight of both drivers and commuters, Obando—a town known for its patron saints—might need another for the challenging commute.