Home›#FactsFirstPH›FACT CHECK: PH economy has ‘strongly bounced back’ from repercussions of COVID-19 pandemic 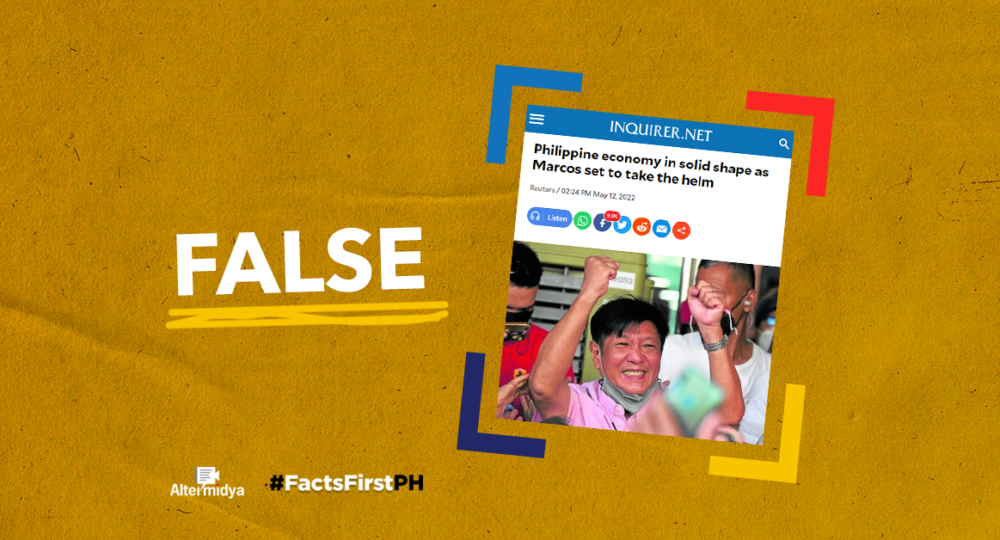 FACT CHECK: PH economy has ‘strongly bounced back’ from repercussions of COVID-19 pandemic

The Philippine Daily Inquirer published an article, quoting the report of Economic Planning Secretary Karl Kendrick Chua on May 12 where he said that the country’s economy has “strongly bounced back” from the effects of the COVID-19 pandemic, as the gross domestic product (GDP) grew 8.3% on the first quarter of 2022.

The article also mentioned that this is the economy that President-elect Ferdinand Marcos Jr. would inherit, as the government officials claim that the Philippines is currently the “fastest-growing economy” in the East Asia region.

Independent think tank IBON Foundation noted that it is myopic to solely base the country’s economic recovery to the 8.3% GDP growth posted in the first quarter, as the said growth is mainly caused by base effects and election spending, which do not actually signal a reinvigorated economy. The election period resulted in higher spending on transportation, accommodation and food services, and printing campaign materials– where the relative growth was seen.

The group also highlighted that the country suffered the second-worst economic contraction among South, East, and Southeast Asia regions in 2020 because of the government’s COVID-19 ‘mismanagement,’ making the country’s economy steadily weak. This structural weakness has been compounded by the high inflation rate and increasing global interest rates.

IBON Foundation also characterized the economic foundations of the Duterte administration as “very weak,” as proven by the shrinking share of agriculture on the economy, despite the Philippines being largely agricultural. Unemployment and poverty rates also increased rapidly, with the government-imposed lockdowns even worsening the situation. The group stated that these would only be reversed if the next administration would focus on strengthening domestic production, local industry, and government spending on social projects including education, health, housing and cash assistance, instead of prioritizing the interest of huge businesses and international or foreign investments.

While the country’s 8.3% economic growth surpassed market media giant Bloomberg’s 6.8% prediction, several observers have noted that this might be the last time the Philippines will post such uptick in the coming months if fundamental issues, including support for agriculture and job generation, are not addressed. –Maez Estrada and Joseph Gloria