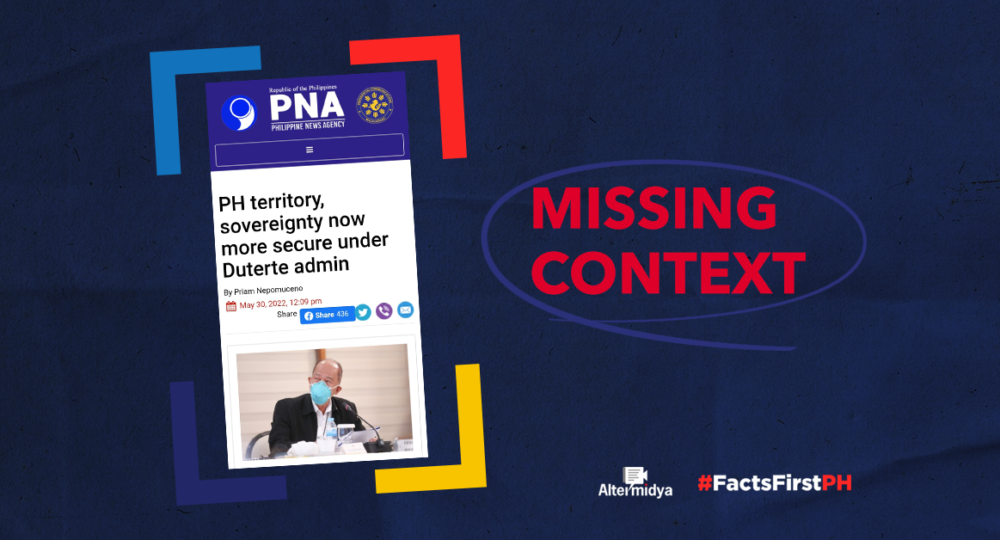 The Philippine News Agency (PNA) published a report which discussed Defense Secretary Delfin Lorenzana’s presentation at the Duterte Legacy Summit last May 30, where he claimed that “for the past six years, the Duterte administration has secured the country’s territorial integrity and sovereignty, as well as its vast maritime borders, through the acquisition of new equipment and patrols.”

While Lorenzana discussed that the Philippines held “6,958 naval surface and 6,432 maritime air patrols” to assert the country’s sovereignty, the article failed to contextualize the heightening conflict in the West Philippine Sea.

Despite the release of an arbitral tribunal ruling in favor of the Philippines in 2016 over the West Philippine Sea issue, the country is still struggling to uphold the country’s sovereignty over foreign encroachment. Western Command chief Vice Admiral Ramil Enriquez said last year that the threat in the Western Command area remains significant, emphasizing the need for “game changer” equipment to amplify maritime defense against foreign attacks in the West Philippine Sea.

Despite the constant military patrols reported by Lorenzana and the repeated filing of diplomatic protests by the Department of Foreign Affairs against the illegal entry of Chinese vessels in Philippine territory, Chinese vessels were still repeatedly reported to be entering Philippine waters illegally, with the Chinese Embassy in the Philippines even insisting recently the West Philippine Sea is a “traditional fishing ground” for Chinese fishermen.

Asserting that the Philippines has gained significant improvements with regard to territorial defense without properly contextualizing the current situation in contested territories can possibly distort the public’s perception on the country’s defense situation. It is even more concerning as PNA, which published the article, is a government-owned and publicly-funded news media company under the Presidential Communications Operations Office. — Mary Lou Destao & Michaella Ruiz

FACT CHECK: Did the Duterte administration’s peace efforts resulted in absence of ...