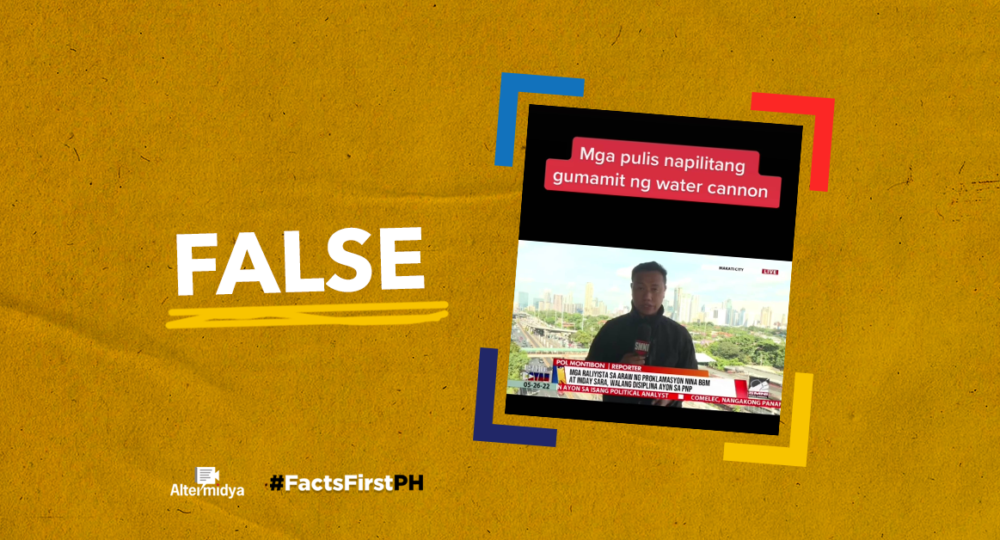 A clip from the SMNI News program “Usaping Bayan” is circulating on TikTok, showing a news report about the police blasting demonstrators with water cannons during an anti-Marcos protest inside the Commission of Human Rights (CHR) compound last May 25, the day of the congressional proclamation of Ferdinand “Bongbong” Marcos Jr., as the new president.

The news report further claimed that the police implemented “maximum tolerance” during the protest, and they were only forced to blast the demonstrators to control the rally, which turned “disorderly.”

FACTS:
Human rights group Karapatan already clarified that the protest was in fact not disorderly, and stressed that aside from water cannons, truncheons and metal shields were also used to hit the demonstrators, resulting to at least 10 people getting injured.

The protest was held at Liwasang Diokno of Commission of Human Rights (CHR), a freedom park wherein permits are not necessary for organizing public assemblies. Moreover, in accordance with the Revised Operational Procedures of the Philippine National Police (PNP), their units are prohibited from using any anti-riot devices unless the public assembly is deliberately causing violence and destruction of property.

A live stream of the protest from Altermidya’s Facebook page also showed that the protest did not cause any deliberate threat to safety and destruction of property.

WHY IT MATTERS:
The PNP has a long history of violent dispersal of peaceful protests across the country. Despite this, in recent months, state forces have continually violated Article 3, Section 4 of 1987 Philippine Constitution which protects the right of the people to peacefully assemble to address their grievances to the government. Human rights advocates also say that the police may be violating the provisions of Batasang Pambansa Blg. 880, which state that authorities should observe the “highest degree of restraint” during protests.

Batasang Pambansa 880 also exempts all designated freedom parks from the “no permit, no rally” policy, which only shows that the authorities have no reason to use force to disperse the protesters, despite the fact that the protest was peaceful in the first place. – Maez Estrada and Joseph Gloria