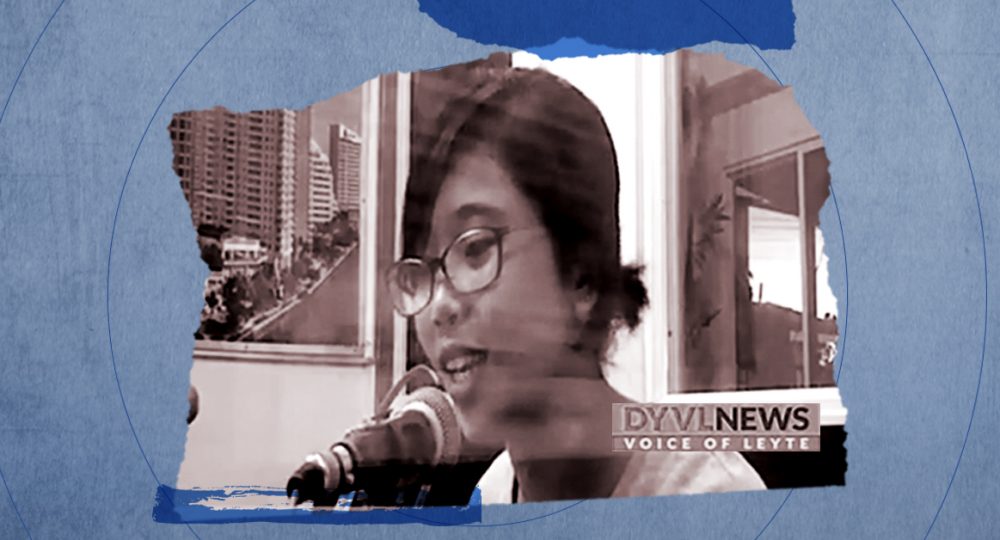 Frenchie Mae, locked up but not backing down

It has been more than a year since community journalist Frenchie Mae Cumpio was wrongfully arrested after a simultaneous raid by state forces on the offices of progressive groups in Tacloban City. The courts are hearing the charges of the Tacloban 5 but, like in many cases of political prisoners, the trial seems to be moving at a turtle’s pace.

The courts had to adapt to the lockdowns imposed due to the pandemic. Hearings and arraignments were suspended and were later conducted online.

With Frenchie’s family residing in a town about an hour away from Tacloban, it was difficult to meet all the requirements to make the case move forward. At the beginning of the lockdown, travel was difficult and offices were shut down for months. Human rights workers assisting the case also found the restricted mobility challenging, especially in the early months of the enhanced community quarantine.

To top these difficulties, Frenchie Mae’s colleagues note the apparent delaying tactics from the prosecution. Attaining justice for Frenchie, along with the rest of the Tacloban 5, seems to become even more elusive.

After being detained for over a year, how is Frenchie Mae Cumpio?

I met Frenchie Mae when I applied as a writer at UP Vista, the campus publication of the University of the Philippines Tacloban. She was already the executive editor of Eastern Vista, but she was invited to give an orientation to the new staff.

I had only known her for months prior to her arrest but the conversations she and I shared were memorable. She could be extremely funny but still be fierce and passionate in her work.  We had been planning to hold a journalism skills workshop and revitalize CEGP Greater Leyte literally a week before she and the others were arrested.

Since the Tacloban City Jail imposed a no-visitation rule for prisoners due to the lockdown, Frenchie has only been allowed phone calls for five minutes everyday and short video chats on weekends. The same is granted for Marielle Domequil, the staff of the Rural Missionaries of the Philippines who was arrested together with Frenchie in their shared boarding house.

The two of them are now detained in the female dormitory of Tacloban City Jail. The five-minute calls serve as a window to life outside of prison. It is a chance to talk with their families, get updates on their case, and ask how their friends are doing. Even if jail visits are prohibited, their families continue to send them food and personal items.

They follow a routine while inside the city jail. They wake up early for prayer and group activities with the other inmates. There are also designated tasks while inside the female dormitory. They savor the opportunity to catch up on the latest news when they get the chance to watch TV or read a newspaper.

More than anything, the two want to be released. Being deprived of freedom for so long has affected their mental and emotional well-being. They long to see their family and friends. They want to return to their work. They feel frustrated at the slow pace of their trial, especially since the prosecution has fabricated another case against them. But they remain steadfast in the fight for their freedom.

Frenchie is not a terrorist, unlike what the military claims. She is a frequent teacher in many issue discussions in campus. She is first to rush to urban poor communities in Tacloban to document cases of demolitions and evictions. She is a friend to many, especially to student activists in UP Tacloban.

“One thing I miss about Ate Frenchie is how driven she is and how easy it is to approach her,” Giles Viojan, a member of the UP Tacloban Student Council says about Frenchie. “I’d probably just cry when I see her in person again. After that, I’d treat her to any food she wants from Andok’s. That’d be my way to make her feel treasured.”

Another youth activist says, “Sobrang gaan niyang kasama, at hindi lang dahil sa built niya. She never fails to smile even at the worst of times. I miss her laugh, her smile, how tiny she was, and her energy.”

Quite honestly, Frenchie is someone I aspire to be. I wanted to emulate her dedication in being a journalist that genuinely works for the people. I often think about the opportunity taken from us to work on strengthening campus publications in the province. But I am sure I’m nowhere as frustrated as she is right now. When she is freed, I’m betting she’ll dive right back to her work. And I do hope that will be soon.