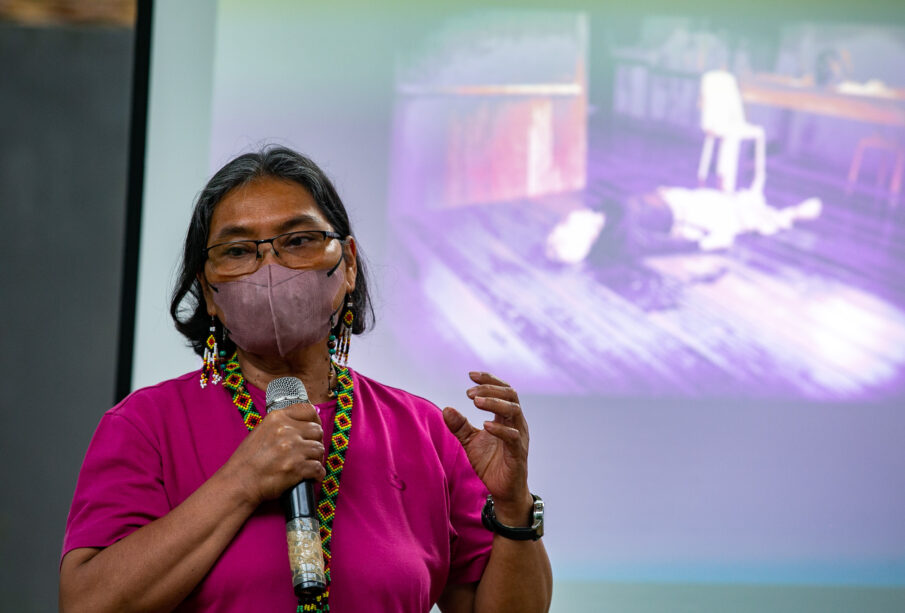 Manobo leader Eufemia Cullamat was among Lianga villagers who witnessed the execution of her brother Dionel Campos, a leader of a lumad organization, her uncle Datu Juvello Sinzo, and Lumad school executive Emerito Samarca in September 2015. (Photo by Mark Saludes)

On Sept. 1, human rights and indigenous people’s groups marked the 7th year of the bloody Lianga massacre with a renewed call for justice for the slain tribal leaders.

Campos and Sinzo were killed in front of the villagers, including women and children, who were rounded up on a basketball court in Han-ayan village.

Catherine ‘Katkat’ Dalon of the Save Our Schools Network, said justice remains elusive for their slainleaders “because of the prevailing culture of impunity in the country.”

“It’s been seven years but the pain and trauma still haunt us. The blood of our leaders was not enough; the government intensified the military occupation of our communities and shut down our schools,” she said.

The 2015 killings resulted in the evacuation and displacement of about 4,000 indigenous people who fled their homes and sought shelter in nearby towns for more than a year.

Dalon said the 2015 Lianga massacre was “just part of a continuing attack” on the indigenous people. “These attacks are meant to pave the way for so-called development projects that destroy our ancestral lands,” she added.

Father Raymond Montero-Ambray, director of the ecology ministry of the Diocese of Tandag, appealed to the Philippine government to “deliver justice” and “end militarizing indigenous communities.”

The priest said it has been the goal of the diocese to “put pressure on the authorities to give more attention to these killings and bring the assailants to the halls of the courts.”

Amid the cry for the absence of justice for the victims of the 2015 carnage, another three indigenous people, including a 12-year-old girl, were killed by the soldiers in the same village last year.

On June 15, 2021, Willy Rodriguez, Lenie Rivas, and 12-year-old Angel Rivas, died in the hands of the military. The victims were reportedly harvesting abaca when soldiers opened fire.

The Philippine Army claimed that the victims were members of the communist-led New People’s Army who were “foraging for food” in the village.

Human rights groups, however, debunked the military claims, saying that the victims were ordinary farmers.

Father Dionito Cabillas, lead convenor of Isaiah Ministry, called on the national government to strengthen laws and policies that aim to protect the lives and rights of the indigenous people.

He also urged the new administration of President Ferdinand Marcos Jr. “to pull out state forces that are occupying and invading indigenous communities and ancestral lands.”

“Government forces must stop their intrusion and allow the indigenous peoples to live peacefully with respect for their right to self-determination,” he said.

Under the regime of former President Rodrigo Duterte, rights groups recorded some 102 cases of killing, 69 cases of abduction, 1,173 cases of illegal arrest, and 19,859 cases of threat, harassment, and intimidation against indigenous people.