Home›Opinion›Columns›Kodao, Rappler, Vera Files and the ongoing assault on the media 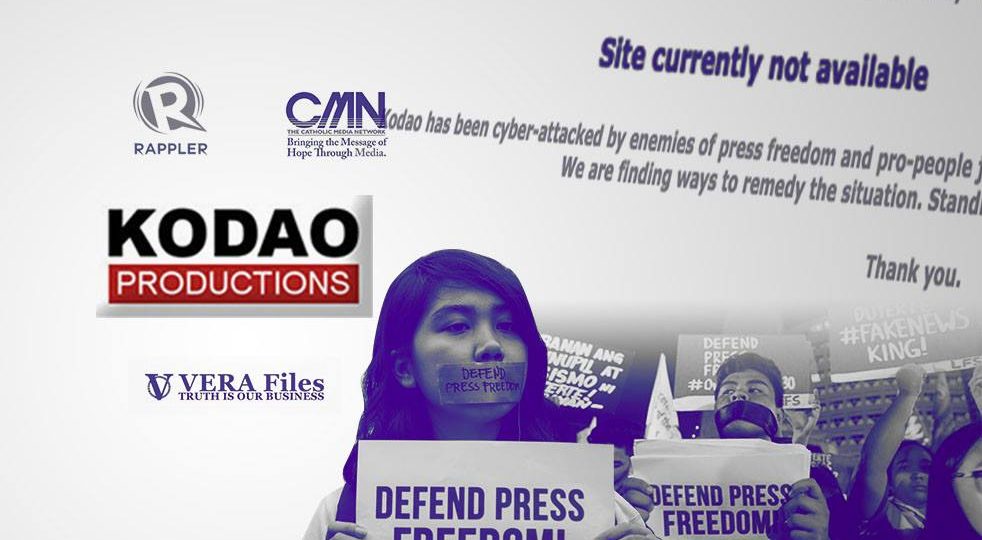 Kodao, Rappler, Vera Files and the ongoing assault on the media

MUCH of public and corporate media attention has been focused on the cancellation by the Securities and Exchange Commission (SEC) of the registration of online news site Rappler. But hardly any has been paid to several other cases indicative of the ongoing Duterte regime assault on other media organizations, free expression, press freedom, and what little is left of Philippine democracy.

The website of the National Union of Journalists of the Philippines (NUJP) was hacked on January 9 a few days after its official Facebook account received threatening messages, and in the context of concerted hate speech attacks on the organization for its membership’s supposedly being anti-Duterte.

The news organization Kodao Productions’ website is still down a week after it was hacked on February 2. Kodao has been documenting human rights violations, the environmental destruction wrought by mining interests, farmer and indigenous people’s displacements.

The House of Representatives has not renewed the license of the Catholic Bishops Conference of the Philippines’ (CBCP) Catholic Media Network to operate at least 54 radio stations all over the Philippines despite the CBCP’s application for renewal filed January 24, 2017, or over a year ago. CBCP has been critical of the Duterte “war” on drugs and has been campaigning for a stop to the killings.

The website of online news site Vera Files was also hacked after it reported that President Rodrigo Duterte and his daughter had failed to disclose the content of some of their bank accounts.

Individual journalists’ websites, such as that of Reuters Philippines correspondent Manuel Mogato’s, have also been attacked. Mogato has been filing reports documenting the toll in lives of the anti-drug campaign.

All share certain characteristics. Insulted, defamed and demonized by the regime’s army of keyboard trolls as anti-Duterte, what these media organizations and practitioners have in common is their commitment to getting at the truth and reporting it to a public confused and misled by the epidemic of false information (“fake news”) generated by both the regime as well as its online trolls, to recruit which, says a University of Oxford study, Mr. Duterte spent some $200,000.

To describe these media organizations and journalists merely as “anti-Duterte,” as the regime, its online trolls and its paid hacks in the old media of print and broadcasting do, is misleading. They are not so much against any individual as they are for certain values and principles, among them the fundamental journalistic value of truth-telling as the primary means of developing the informed citizenry needed in this rumored democracy, and the responsibility of enhancing their audiences’ understanding of their country, society, and the world.

The specifics of these commitments are in the verified and verifiable reports on the violations of human rights, the thousands of killings that have devastated poor communities in the course of the so-called “drug war,” the continuing destruction of the environment by the oligarchs that have been the most supportive of the Duterte despotism, and regime subservience to its US and Chinese overlords.

Both the free and responsible media’s allegiance to truth and the duty of disseminating it to a public that so desperately needs reliable and relevant information are anathema to a regime whose overweening ambition is not the change that it pledged in 2016 was coming, but to prevent it.

During the campaign that year, Mr. Duterte made use of the demand for change and even revolution that for decades has been implicit in mass expressions of discontent and hopelessness as his path to the presidency. From the commanding heights of Malacañang he has since begun to amass power for himself and his cohorts in Congress and the upper levels of the bureaucracy unchecked by such State institutions of checks and balances as the Supreme Court and the Ombudsman. The role of the first as a check on executive power and guardian of citizen rights has been pre-empted by the dominance in it of regime appointees, while the latter is being besieged by a sustained assault on its independence.

In the context of the weakening of these state agencies, only an awakened, informed and empowered citizenry and a free press can prevent the restoration of authoritarian rule. But only those directly attacked and the most dedicated and committed sectors of the media community have seen through the regime’s campaign against press freedom and free expression and have come to their defense.

Driven by different and at times even contradictory political and economic interests, the Philippine press and media must set aside their differences in this hour of grave peril to the Filipino nation and to their common interest of continuing to function without the threats and harassments to which some of their number are being subjected.

The stark reality is that the more recent attacks on the media are just the beginning, and, as the country’s experience during the Marcos terror regime so clearly demonstrated, will spare no media organization. No tyranny has ever allowed even the silent and acquiescent to continue to function for long out of fear that even they may eventually find their voice.

It isn’t just Kodao Productions, Rappler, VeraFiles, NUJP or the Catholic Media Center that are under siege, but press freedom, free expression, and the entire Philippine media and press community as well—and with it, the rights and liberties and future of the Filipino people. The Philippine press and media must transcend their narrow interests, and expand their awareness enough to come together for the nation’s sake.

LETTER TO THE EDITOR | Dengvaxia Fiasco: Bare All Facts, Let the ...