Myles Albasin & the Mabinay 6: Three Years and Still in Jail

Youth leader Myles Albasin and five other young activists, collectively known as the ‘Mabinay 6,’ are marking their third year in jail in Negros Oriental. Like many detained activists, the six are charged with illegal possession of firearms and explosives — a fabricated case, according to their family and human rights advocates.

The Mabinay 6 were nabbed on March 3, 2018 in Barangay Luyang in Mabinay, Negros Oriental and accused as members of the New People’s Army. The military claimed that the six were involved in a firefight with the 62nd Infantry Battalion of the Philippine Army.

This year, Defense Secretary Delfin Lorenzana in a press conference presented a list of what he claimed were “UP students who had joined the communist movement and died in military encounters”. Among those he named was Myles.

Her mother, Grace Albasin, a veteran journalist, denounced Lorenzana’s irresponsible statement. She called it “fake news that only worsens Myles’s difficult situation”. To begin with, Grace said, the trial of Mabinay 6 has not even started even as three years had passed since their arrest.

Who are the Mabinay 6?

The Mabinay 6 are young activists from different backgrounds. Myles is a student of the University of the Philippines Cebu, a fresh graduate at the time of her arrest. Randel Hermino, a native of Negros Oriental, comes from a family of sugarcane workers. Carlo Ybañes is from an urban poor community in Cebu while Joemar Indico, Joey Vailoces, and Bernard Guillen are organizers of peasant communities. 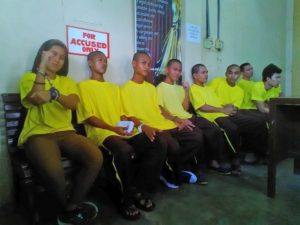 All six activists were staying in Mabinay to help organize a peasant activity in the town. It was not the first time that Myles visited peasant communities, Grace shared. Myles had been involved in field researches, fact-finding missions, and other solidarity activities with farmers. “My daughter is an activist, and I don’t think there is anything wrong with that,” Grace had said in previous interviews.

Myles, in fact, was about to enter law school that year to continue her advocacy of defending the marginalized, her mother shared.

However, the six activists tested negative for gunpowder. Paraffin tests done by the Negros Oriental Provincial Crime Laboratory also yielded negative findings, debunking the military’s claim that the six were involved in gunfight.

The Mabinay 6 pleaded “not guilty” at the Regional Trial Court Branch 45 in Bais City on May 2, 2018. They also filed a petition for bail. Six months later, one of their lawyers, Benjamin Ramos, was shot dead by armed men in a public plaza in Kabankalan City.

The families of the six activists are still waiting for the court’s decision on their petition for bail. A hearing was conducted in June 2019 with no opposition from the prosecution.

‘Fight until it’s over’

Meantime, the Mabinay 6 try to stay healthy in detention, especially amid the pandemic. Last year, Joey was reportedly diagnosed with urinary tract infection. The Court immediately granted his request to receive medical attention. Meanwhile, Randel was isolated early this year for having colds, and loss of taste and smell.

There have been deaths in both female and male jail facility. Grace said it now mandatory for them to wear masks because of the pandemic.

“We make sure Myles has her allergic rhinitis maintenance and food supplements. We provide her food materials for painting, and books for emotional and mental wellness,” Grace shared.

She added, “In a country where impunity has become the norm amid violence and corruption, we take comfort in God’s protection and divine intervention. Amid the pandemic, the only choice is to be well so we can fight with this until it’s over.”