With the Tacloban City Prosecutor’s Office filing charges of illegal possession of firearms and explosives against a community journalist and four activists nabbed in simultaneous raids in Tacloban City in the wee hours of February 7, various groups slammed the move and described the raps as “patently fabricated charges.”

“The charges filed against the Tacloban 5 are baseless and all rely on planted evidence. The five arrested are not criminals,” said People Surge Network chairperson Efleda Bautista. “If only due process was followed and they were not particularly framed for crimes they did not commit, the Tacloban 5 should be free by now.”

In the first resolution, community journalist Frenchie Mae Cumpio and Rural Missionaries of the Philippines layworker Mariel Domequil were charged for illegal possession of firearms and explosives. Both were nabbed following the raid of the office of Eastern Vista in Calanipawan Road, Tacloban City. 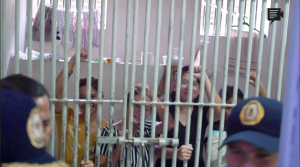 Four of the Tacloban 5 in Palo PNP station. Photo by Chantal Eco

The three were nabbed during the raid in the joint offices of Bayan-Eastern Visayas and Samahan han Gudti nga Parag-uma ha Sinirangan Bisayas (Alliance of Peasants in Eastern Visayas) in Bañezville, Tacloban City.

The said resolution also pressed charges of illegal possession of firearms and explosives against Rogelio Berino Jr. of SAGUPA-SB. Berino was named in the search warrant that justified the simultaneous raids but was not present when the raiding team arrived.

The City Prosecutor’s Office recommended a P120,000 bail each for Legion and Cabaljao. No bail is recommended in the case of Abinguna and Berino.

In the inquest resolutions, the Tacloban City prosecutor disclosed that the firearms, ammunition, and explosives were found either on the beds of the accused, or on the nearby bedside tables.

Colleagues of the Tacloban 5 point to this finding as strong proof that the evidence was planted.

Annie (not her real name), who was present during the raid in the office in Bañezville, told Altermidya that it was impossible for live ammunition, guns, and explosives to even be present in their office.

“Marissa (Cabaljao) has a one-year old baby living with us. That fact alone contradicts the claims that there were guns found on top of their beds. What sane parent would just leave a gun like that with an infant around?” Annie said in Waray.

Cabaljao’s baby was initially put in jail with her, until Cabaljao’s relatives retrieved the infant on Monday.

“The supposed evidence against the Tacloban 5 were obviously planted. The raiding team could have done a better job hiding the guns and ammunitions, but they just put these on beds and tables,” remarked Joshua Sagdullas, Bayan-Eastern Visayas secretary general.

Sagdullas described the whole incident as “outrageous, devastating, and abusive,” noting that state forces are apparently willing to go to great lengths to nab their targets.

“What is even more suspicious is how the police and military did the raid,” Sagdullas added.

Accounts of the Tacloban 5 noted that the raiding teams, which were composed of members of the Criminal Investigation and Detection Group (CIDG), Tacloban City police, and the military – totaling around 150 people in each of the simultaneous raids – forced all people in both offices to head outside and made them lie on the ground at gunpoint. Members of the raiding team then went inside both offices unaccompanied by any witness, as required by the law, and stayed inside for about 10 minutes.

It was only about 45 or so minutes into the raid were members of the barangay council appeared in the scene to serve as witnesses. It was only when the search party and the barangay officials entered the offices this time around were the guns, ammunition, and explosives were found spread on beds and tables.

“We were shocked. If there were really guns or explosives there, these will surely be found in less obvious areas. That’s a no-brainer,” Annie remarked.

In a press conference in UP Tacloban attended by Makabayan bloc solons and national leaders on Monday, several leaders said that not only will they fight off what they call “trumped-up charges” against the Tacloban 5, they will also explore other legal remedies to make the perpetrators of the raids accountable.

Makabayan bloc lawmakers Ferdinand Gaite of Bayan Muna and France Castro of ACT Teachers said that a congressional investigation is underway. “Congress will summon all officials involved in this incident and probe not only the irregularities but moreso, the reason behind this new wave of attacks,” Gaite said.

The groups are also mulling to file raps against all public officials involved in the incident for “malicious abuse of authority.” “We are beginning to gather all relevant information and details to strengthen our case. The perpetrators should be made accountable,” said Bayan Muna chairperson Neri Colmenares.

Apart from the commanding officers during the raid, Sagdullas highlighted that Brigadier General Lope Dagoy, who is leading the AFP’s 802nd Infantry Brigade in Leyte, should also be put to justice.

Before being assigned in Leyte, Dagoy served as commander of the Presidential Security Group.

“Gen. Dagoy is really the one operating this crackdown in Eastern Visayas. Ever since he was assigned here, several killings, raids, and other state-perpetrated violence against the people have occured. He is seemingly following the footsteps of his mentor, retired Maj. Gen. Jovito Palparan,” Sagdullas explained.

“We need to remain resolute and fight the onslaught being perpetrated by the Duterte administration and the AFP. There is fear, yes, but we need to continue fighting and hold these perpetrators accountable,” Sagdullas concluded.