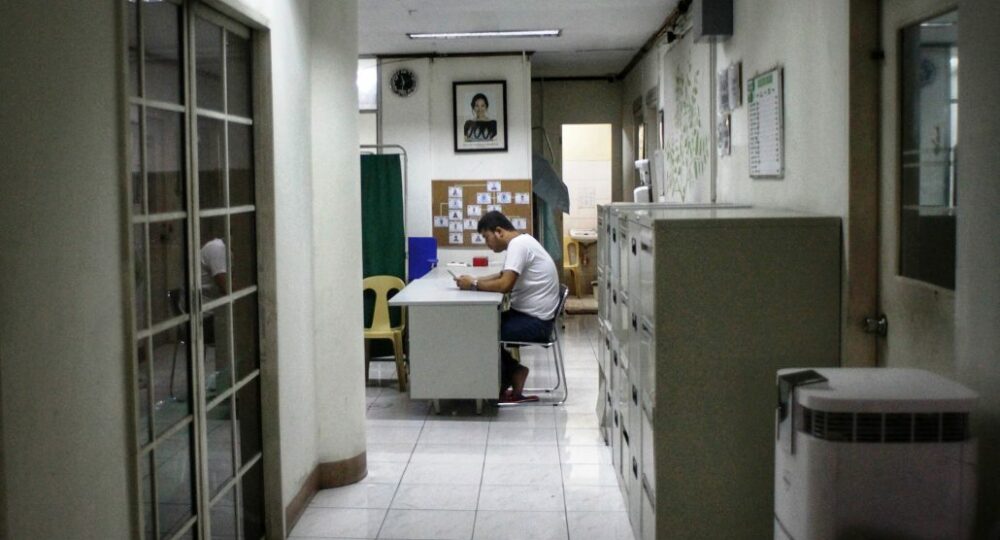 “MM” became a commercial sex worker soon after he became sexually active. An only child of a single parent, he wanted to be able to support his mother and ageing grandmother after finishing college. But financial difficulties were getting in the way of his dreams and often had no fare money back to Rizal province after a day in school. “Natutulog ako noon sa Luneta, at pumayag ako sa mga offer na ganun,” he revealed. (I sometimes had to sleep at the park and started to agree to have sex with strangers.)

He was able to earn a college degree and was already working as a sale consultant when he learned he was HIV (human immunodeficiency virus) positive. Then active in LGBTQ (lesbian, gay, bisexual, transgender, and questioning) circles, he met and was befriended by an incognito Quezon City government health worker who convinced him to have himself HIV tested.

“I had myself tested in July 2011. I received the result on September 26 at exactly ten o’clock in the morning,” he recalled. “Iyon nga, positive.” (That was it, I was HIV positive from thereon.)

MM said he initially did not react much to the news. “Honestly, I did not know much about HIV. Very few knew about it in those days,” he said. It was only when learned more about it and its potentially life-threatening progression, AIDS (acquired immunodeficiency syndrome), did he decide to tell his mother. It was only then that he cried. “I was 22 just years old,” he said.

MM asked his friend for a meeting to ask her advice on what to do. It was then that Adelle Aldaz revealed to him she was a health worker of the Quezon City government. Aldaz told him that Quezon City’s “mega-clinics” have special services for those who find themselves in such a situation.

“Mama Adelle,” as MM eventually started calling her, was then a counselor for HIV patients at one of Quezon City’s mega-clinics, the Klinika Batasan (the others were Klinika Project 7 and Klinika Novaliches). The counselors were not licensed health professionals but had undergone intensive trainings in dealing with commercial sex workers and the LGBTQ community, specially MSM (men having sex with men), and in convincing and educating them on safe sex and HIV.

“We went to bars at night where our clients usually were and that was where I met MM,” Aldaz said. “We do not identify ourselves as health personnel of the LGU until we have earned their trust. It is easier to talk to gay men; the commercial sex workers in Cubao are more difficult to befriend. We have to convince them at first that we are not the police out to arrest them or convince them to stop doing what they are doing,” she added.

Aldaz said meeting MM came at a good time. She was applying for transfer to the old Klinika Bernardo. It was closer to her residence and was then being transformed from a regular barangay clinic to a social hygiene health institution for commercial sex workers and HIV patients.

Klinika Bernardo physician Leonel John Ruiz said there were only two places people could go to have themselves tested and treated for HIV a decade ago: the RITM (Research Institute for Tropical Medicine) in Muntinlupa and San Lazaro Hospital in Manila. Both were too far away for Quezon City residents, the lines were always too long, and the test results usually arrived weeks after. “We thought of putting one up in Quezon City for the MSM and commercial sex workers our counselors were able to convince,” Dr. Ruiz said.

Klinika Bernardo Park is strategically located between the streets of commercial Cubao and the bars of the Timog Avenue area. “But we have many non-QC residents who’ve walked in. This area has many bus terminals and passengers saw the signs we put up offering free and discreet HIV testing and treatment,” Dr. Ruiz said. Some of their clients hail from as far as Mindanao.

Then Vice Mayor Joy Belmonte was the local official who inaugurated Klinika Bernardo when it opened as a social hygiene and HIV treatment clinic in October 2012. Dr. Ruiz said Klinika Bernardo became a reality because Quezon City’s top two officials at the time had soft spots for the sectors the clinic primarily serves. “[Now] Mayor Belmonte is strong on HIV health care while Mayor Bautista pushed hard for Quezon City to be non-discriminatory of the LGBTQ community,” he said. Former mayor Bautista also granted their requests for new equipment and furnishing, such as air-conditioning sets and laboratory machines after the clinic won the coveted Galing Pook Award in 2014. The Galing Pook Award of the Department of Interior and Local Government-Local Government Academy recognizes innovative practices by local government units. “Because of such support, we now conduct in-house laboratory procedures that drastically cut the waiting time for test results if they were taken at either RITM or San Lazaro hospital from weeks to just two or three days,” Dr. Ruiz said.

He added that they received great assistance from the group Reaching Out for Most At-Risk Population, a project supported by the United States Agency for International Development, that helped Quezon City design Klinika Bernardo’s service delivery procedures and from the group Sexy When You Know It who trained its personnel on motivational counseling.

The product is a safe space for HIV patients and commercial sex workers. “We are open at three o’clock in the afternoon until 11 at night because of the nature of work and lifestyle of our clients, who go out mostly at night,” Dr. Ruiz explained. “Here, they do not have to be with many other patients of other illnesses who [used to] look down on them,” he added.

Klinika Bernardo has two sections on its two floors. The first floor is the social hygiene clinic that caters to commercial sex workers mostly for their sexually-transmitted infection screenings and check-ups while the upper floor is the HIV testing and treatment area. But the lively chatter and banter of the counselors, personnel and the clients is what defines it more as safe space. “Klinika Bernardo is not only discreet, it is very welcoming to all. Even our security guards are LGBTQ community members,” Dr. Ruiz said.

Dr. Ruiz clarified however that patients with other illnesses may still avail of its other health services. “We are an inoculation center during this (coronavirus-19) pandemic, of course,” he said.

Not just a clinic

Klinika Bernardo’s successes provided lessons that encouraged Quezon City’s other social hygiene clinics to become HIV-treatment centers as well. Its Galing Pook Award has also attracted other local governments to study it. The clinic has provided support for the creation of social hygiene clinics in the cities of Marikina, Manila and Valenzuela, as well as in the province of Cavite.

The clinic played a leading role in the creation and operation of the HIV inter-referral system and service delivery network with not just health institutions but with persons with disability (PWD) groups, the Department of Social Welfare and Development (DSWD) and churches. Klinika Bernardo’s experiences also helped in the creation of policies supporting HIV patients, such as financial assistance packages from the DSWD and the granting of PWD identification cards to persons with HIV and AIDS. “Klinika Bernardo is not just a clinic, it is now a network,” Dr. Ruiz said.

Klinika Bernardo’s latest innovation is the use of the motorcycle delivery services to send medicines to clients who could not to take public transport due to their co-morbidity or simply do not have fare money.

Despite the special support it receives from the local government, Klinika Bernardo is not without problems usual to the health care delivery sectorin thePhilippines. The clinic has its share of shortages of anti-retro viral drugs that only the Department of Health (DOH) can buy from abroad. The clinic also experiences low supply of testing kits for viral loads of HIV/ AIDS patients as well as pre-exposure prophylaxis tablets for their sexual partners.

Klinika Bernardo said it has yet to experience running out of medicines and kits despite conducting 30 to 40 tests every day, but is always concerned when supplies are getting low. It has informed Mayor Belmonte of the situation, who in turn told them she is looking into the possibility of the local government procuring the special supplies for its hygiene clinics across the city.

“It could not come sooner as HIV cases have gone back up to pre-pandemic levels. There were not many walk-ins and there were less visits by our clients during the lockdowns, but we are now back to 1,000 cases under our care,” Dr. Ruiz said.

Dr. Ruiz said that Klinika Bernardo also suffers from staffing problems. It has requested for two more encoders, a pharmacist, a utility aide and a nurse. Its two nurses are already taking up other tasks, such as encoding. He added the clinic wishes its contractual counselors and case managers to be given permanent employment status by the LGU. “Our counselors are very vital to the kind of service we provide here. They are the first contacts; they are the support system; they even conduct tracing of patients who suddenly do not visit the clinic anymore. They are family to our patients,” Dr. Ruiz said.

The doctor revealed however that the Quezon City Council has already approved of the building of a new three-storey structure to replace the current ageing one. All they need is another building to temporary house the clinic while a new is being built at the same location.

Former mayor Bautista for his part said he hopes that plans to build a home for HIV patients abandoned by family or partners would be approved. He revealed that this was his Stage 2 of the Klinika Bernardo plan when he was mayor.

Klinika Bernardo counselor “Jaja” also has a radical dream of their own: Clinics for transgenders like them. “HIV information for MSM is already getting adequate. But HIV cases among transgenders are also rising. We need dedicated clinics for us because we need to study if treatment for HIV or any other illness is safe to administer if a transgender patient is undergoing hormonal therapy,” they said.

MM said Klinika Bernardo saved his life, the reason why he left his sales consultancy job and applied to become a full-time health counselor. He is now both a Klinika Bernardo worker as well as client. With Aldaz’ guidance and support, he has religiously followed all health protocols and religiously took his medicines.  “It’s been 10 years and I have never suffered an opportunistic infection,” he said.

(I thought my life had become meaningless. But here I am, helping others live on.)

He said he is always grateful to and contanstly inspired by her “Mama Adelle.” MM said he still periodically sends her text messages: “I owe you my life.”

This story was made possible through a grant by the Philippine Press Institute under the auspices of the Hanns Seidel Foundation.

Volunteering for alternative media: A leap of faith