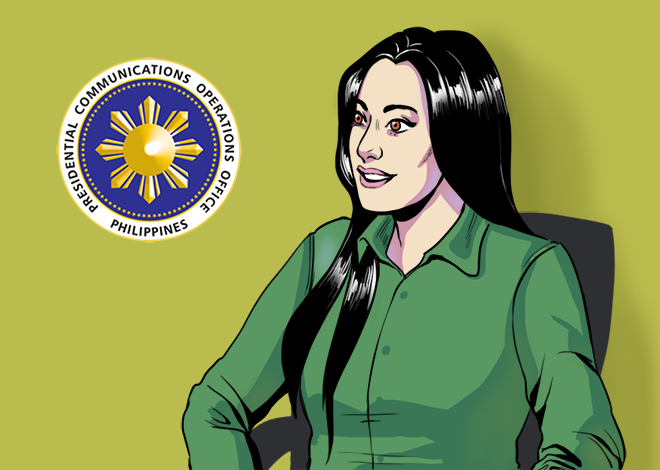 HOW does the appointment of blogger and die-hard Duterte partisan Margaux “Mocha” Uson as an assistant secretary in the Presidential Communications Operations Office (PCOO) mesh with President Rodrigo Duterte’s declaration last March 10, during the launch of government channel PTV4’s Cordillera hub, that he would open the government media system to Muslim groups and to the members of the Communist Party of the Philippines (CPP) so they can air their grievances and explain their views to a larger audience? Or is this latest presidential appointment an implicit repudiation of what at the time looked like an enlightened media policy in the making?

The Duterte statement, if made into policy, would transform the government media system from the public relations arm of whatever administration is in power into a vehicle of authentic public information by not only being available for the airing of views other than solely those of the administration, it would also demand adherence to such standards of productive dialogue as civility, accuracy and fairness.

Mr. Duterte in fact suggested that the British Broadcasting Corporation (BBC) could be the model for a Philippine government media system that would reflect the diversity of views that’s currently missing in it, and even joked that PTV4 personnel could just copy the BBC.  He went even further: he declared that he would give the government networks “some freedom,” presumably in the course of their discharging the journalistic duty of truth-telling by consulting multiple sources rather than only official ones.

During the same occasion, Mr. Duterte also pledged not to use the government media system for either his personal or his administration’s benefit, in acknowledgement of the fact that that is how the system has been used by past regimes.

The appointment of Ms. Uson, however, seems at odds with that pledge. Ms. Uson is extremely hostile to criticism of President Duterte and his administration, and is apparently unaware that calling people names doesn’t win arguments and that one has to support one’s claims with factual evidence when it comes to such matters of grave public concern as extrajudicial killings (EJKs).

Her appointment was obviously a reward for her steadfast support for Mr. Duterte during the 2016 campaign for the presidency as well as for her acerbic verbal assaults on the media and Mr. Duterte’s critics since the latter took office.  It raises the question of whether, in her new role as a civil servant whose loyalty is to the entire citizenry and not just to that portion of it that voted for her idol, Ms. Uson will continue to defend Mr. Duterte’s policies, statements and acts with the same partisanship, and to criticize, to the extent of name-calling, his alleged detractors.

Ms. Uson is apparently continuing her blog, although with the caveat that it contains her views and not the PCOO’s.  However, because her appointment puts her in charge of that office’s information campaign via social media, she will inevitably have to reflect in her blog and other public issuances the policies of the office she now holds as those have been presumably developed and are being implemented by her PCOO superiors.

Hopefully, those policies reflect the thoughts Mr. Duterte publicly expressed last March 10 (every presidential utterance on State matters is presumed to reflect official policy) – thoughts which correctly assume that government media can contribute to the democratic discourse by allowing a multiplicity of views, including unpopular and unofficial ones, access to the government’s radio, television and social media networks.

If that is indeed the case, Ms. Uson will have to reinvent herself: from a passionate partisan of Mr. Duterte and his administration who has been accused of name-calling and disseminating fraudulent, unsubstantiated “information,” into a sober, fair and professional purveyor of truth open to the views of others who may not agree with her, but who certainly have the right to their opinions.

To be specific about it, as a PCOO assistant secretary implementing an enlightened media policy, she will have to give time and space to the views of the people she loves to hate, among them Vice President Leni Robredo, Senator Leila de Lima, the critics of the anti-drug policy, and yes, even Senator Antonio Trillanes IV.

If that is not the case – if, in short, Mr. Duterte was merely filling what would have otherwise been dead air last March 10 – Ms. Uson’s appointment will be a most telling indication that this administration is focused on silencing critics and denying those who disagree with it the use of a system that, let us all remember, is sustained by the people’s taxes.

MARBAI farmers: Their reality, our realizations