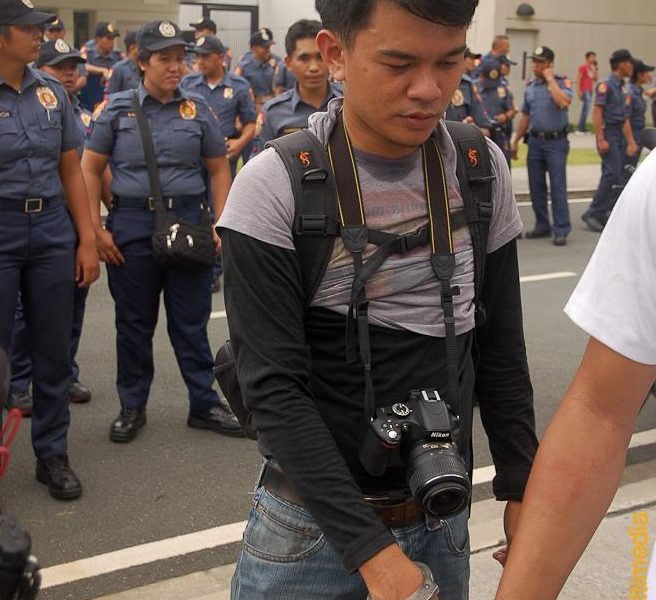 ALTERMIDYA, a national network of alternative media groups, strongly condemns the attack on journalists covering the protest at the US embassy Wednesday morning. Close to a thousand protesters, mostly indigenous people, were about to conclude their demonstration when police violently dispersed, mauled and arrested several demonstrators.

Among those illegally arrested was Wences Balanquit, a journalist of alternative media outfit Southern Tagalog Exposure and regional coordinator of the AlterMidya Network. The police also mauled videographer Jaja Necosia of Kilab Multimedia.

At least seven police members forced Balanquit on the pavement and handcuffed him. He was brought to the Manila Police District station where he was detained for at least three hours with at least 22 other protesters and medical responders. The police also attempted to seize Balanquit’s camera, but he resisted.

Meanwhile, Necosia was shooting a video of a police officer pulling the hair of a Lumad protester when the officer saw him and punched him on the chest. The police was identified as PO3 Franklin Kho, allegedly the same officer who rammed and run over demonstrators with a police van.  At least 50 protesters were reportedly injured in the dispersal.

The violent dispersal at the US Embassy was the second in the last two days. On Tuesday, police used water cannon to disperse protesters at the Camp Aguinaldo. Journalist Kimberlie Quitasol of Northern Dispatch Weekly was hurt in the incident.

The AlterMidya denounces the inexcusable attack on protesters expressing their legitimate demands, and on our colleagues covering these demonstrations. It is the responsibility of the police to protect the rights and freedoms of the people, and not suppress and attack these. We call for an independent investigation on these atrocious incidents and demand the liable officers to account.

‘Go back to barracks’: Masbate farmers demand pullout of military from communities