Home›Opinion›Editorial›Upholding our sovereignty and dignity
Editorial

Upholding our sovereignty and dignity 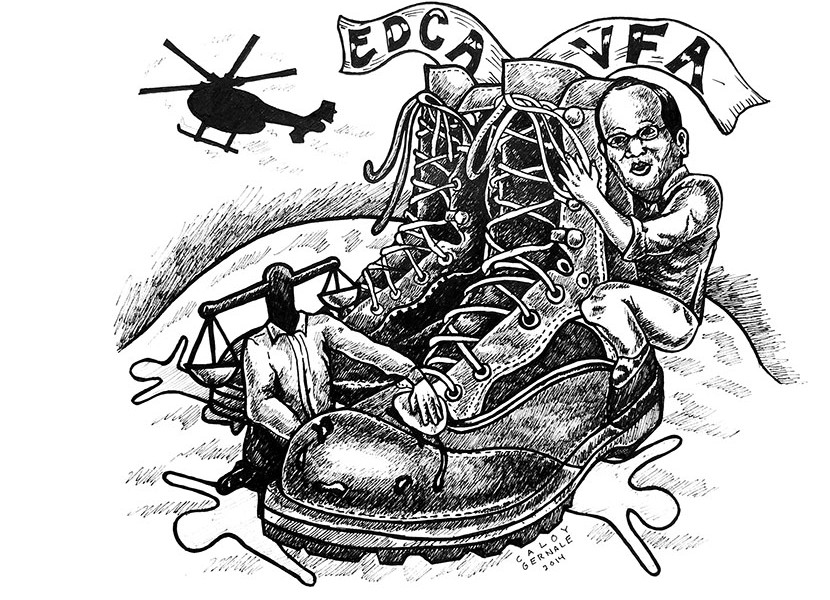 ON FEBRUARY 4, cause-oriented groups will file a motion for reconsideration to question the Supreme Court decision on the controversial Enhanced Defense Cooperation Agreement (EDCA). The day is significant in Philippine history because a shot fired by a US sentinel in 1899 signalled the start of the Philippine-American War.

Behind the Supreme Court decision upholding the constitutionality of the EDCA is the defeatist reasoning we have heard time and again for over a century: The Philippines is small and weak; we need a superpower to protect us and develop our defense capability.

It seems ridiculous that the country prides itself to be a sovereign nation but relies on a foreign power to defend it from its perceived enemies. It is ironic, too, that while government rightly stands its ground against China’s incursions in Philippine territory, it allows the US military through EDCA to enter freely and build military facilities around the country—rent-free, tax-free and strictly off-limits to Filipino authorities.

Similarly it is discomforting to hear our highest officials presume that the US will indeed help us defend our territory from China or modernize our armed forces. This is despite the absence of any mention of “China”, or the “West Philippine Sea”, or “Scarborough Shoal or Kalayaan Islands” in the entire EDCA document. This is also despite the absence of any provision in the EDCA clearly stating that the US commits to modernize the Philippine Armed Forces.

Truth be told, it is not in the interest of the US to actually defend Philippine sovereignty and territory against China. The US itself is notorious in violating this over and over again. What the US is interested in is pursuing its pivot in the Asia Pacific and limiting China’s influence in the region without risking its enormous economic interests in China. The US took advantage of the sea dispute issue to justify EDCA, but in the end it doesn’t matter to the US if the Philippines completely prevails over its territorial claim or not.

If the US did not categorically promise to side with the Philippines on the territorial dispute against China, then it is irrational for the SC justices to deem that the EDCA will deter China’s aggressive incursions. In fact, a China news agency reported that the EDCA approval might even push the tense situation in the region to the brink of war. Even the Philippine government’s commendable step of turning to the Arbitral Tribunal to assert its claim is now marred with an implicit association to the US agenda.

In the first place, the task of defending our territory (whether from China, US or any other foreign power) and developing our defense capacity are responsibilities that a sovereign state should endeavor.  The Philippines has been under several military agreements with the US since the 1950s— the MDT, the MBA, SOFA, MLSA, VFA, and now the EDCA. Each time, without fail, our officials invoked the promise of military modernization to justify US military presence.

After decades of receiving (or even purchasing) few outworn, handed-down military equipment from the US, shouldn’t the state have made more effort to develop the armed forces on its own? More importantly, shouldn’t our government acknowledge by now that this promise is a fallacy, and that the US exactly wants the opposite to happen—for our armed forces to remain inept and dependent on the US?

While the Philippines gets vague benefits like “mutual assistance”, “humanitarian aid”, “environment protection”, the generous perks that the US gets from EDCA are clear as day: the US gets to build exclusive war bases in any agreed location in the country (even without the approval of a local government), with no limit to the number of bases and with no fixed expiry; the US gets a convenient launching pad for the deployment anytime of its troops and war materiel in the region; it gets to build its own telecommunication system with free use of all our range of radio spectrum; it is exempted from paying taxes and fees for their use of water, electricity and other utilities, etc. These are just among many other blatantly unjust provisions in the EDCA. And with the VFA still in place, US soldiers involved in abuses and crimes against Filipinos are given immunity and are allowed US custody.

All these raise the issue of the outright failure of the Aquino government, the Supreme Court, and our officials to uphold national sovereignty and dignity as a people. There is no question that we need to assert our territories against China’s aggression. But defending our sovereignty also means rejecting lopsided and devious treaties like the EDCA that further deepen our subservience to the US.

The EDCA is today’s most blatant symbol of US intervention in the country, surpassing even the infamy of former bases like Subic and Clark.  But it will also be a lasting reminder of how the Aquino government has surrendered our sovereignty and dignity in a manner unequalled by any administration. It is treachery that the Filipino people would never forget.