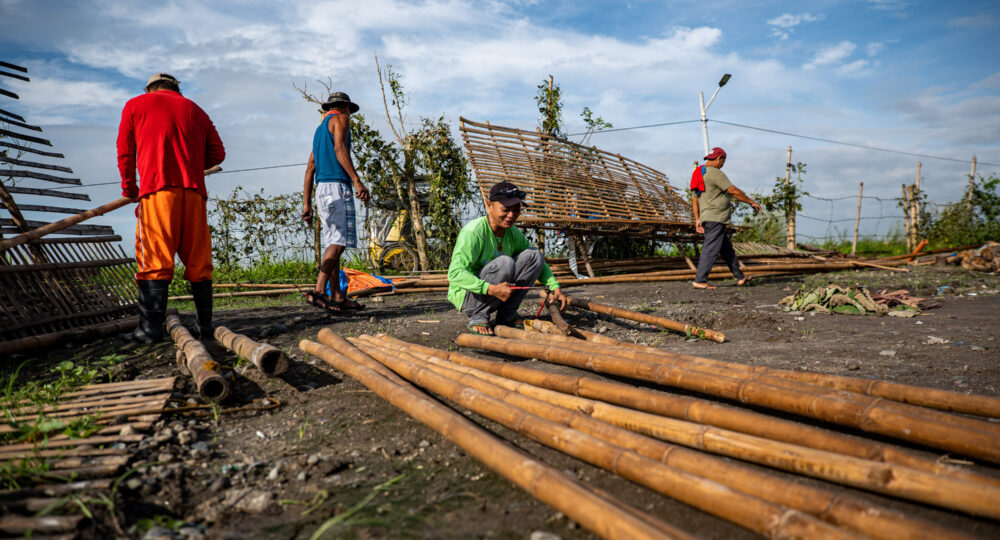 After the storm: Tinang farmers rebuild and continue fight

Tarlac— Only a portion of the nipa hut was left standing after the storm. It was part of the kitchen where farmers used to prepare and cook their food. The rest of the hut was blown away by the storm.

On Tuesday, September 27, farmers in Hacienda Tinang in Concepcion town, Tarlac province gathered to rebuild the nipa hut that symbolizes their collective struggle for land rights. 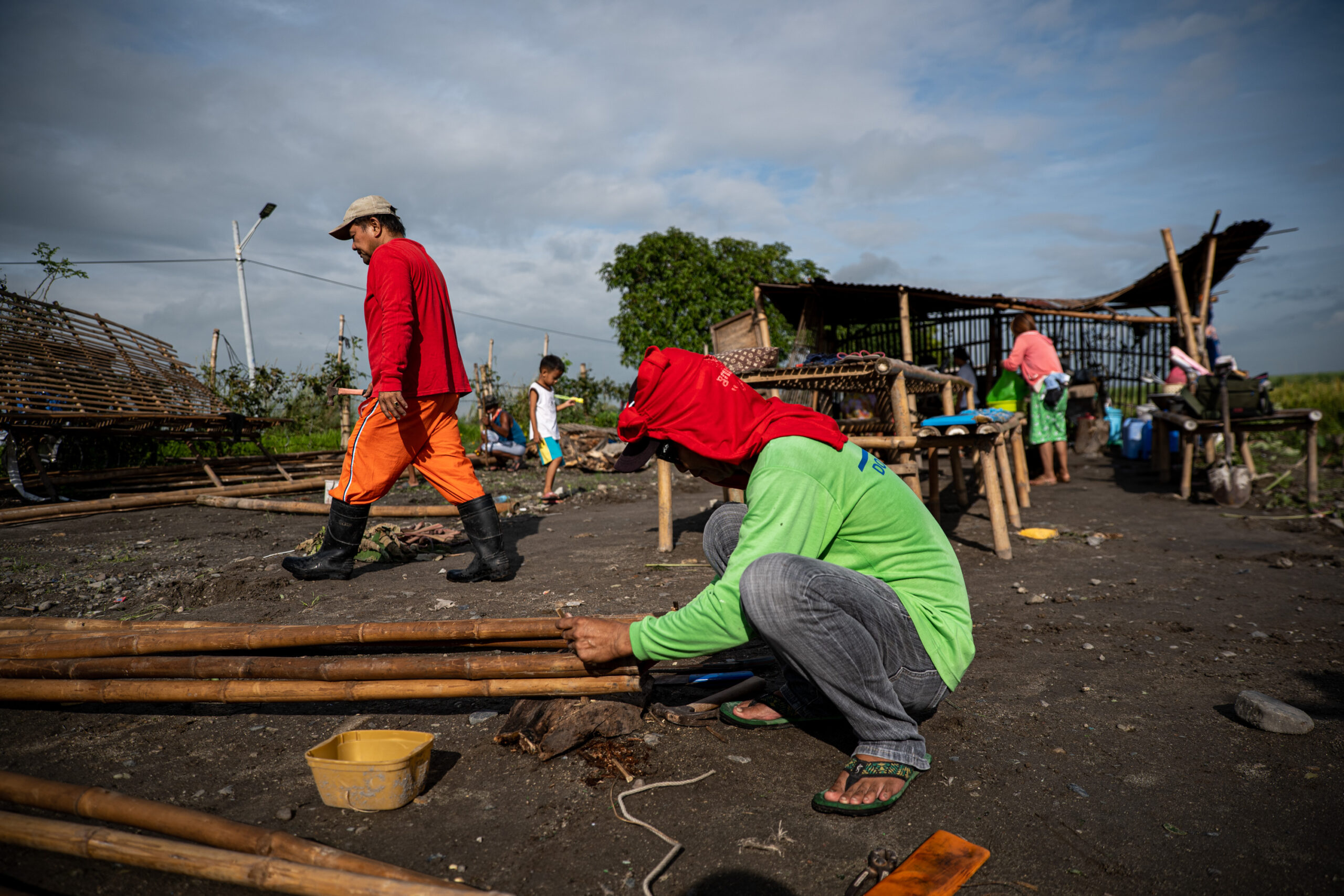 Farmers in the disputed Hacienda Tinang in Concepcion town, Tarlac province gather to rebuild their nipa hut two days after the onslaught of super typhoon Karding. The farmers, who are agrarian reform beneficiaries, said the nipa hut symbolizes their collective struggle to assert their rights over the land. Photo by Mark Saludes/Altermidya

The hut was built in February when members of Malayang Kilusang Samahang Magsasaka (MAKISAMA) Tinang staged a picket to demand the national government install the agrarian reform beneficiaries (ARB) on the 200-hectare disputed land.

Near the nipa hut is the fruit of the farmers’ collective tilling – full-grown palay on a two-hectare land, which used to be part of a massive sugarcane plantation.

The farmers were set to harvest the palay, but a super typhoon hit Luzon on the same week. On September 25, Typhoon Karding (international name: Noru) destroyed 148,091 hectares of farmlands in the northern Philippines, affecting nearly 89,000 farmers and fisherfolk. 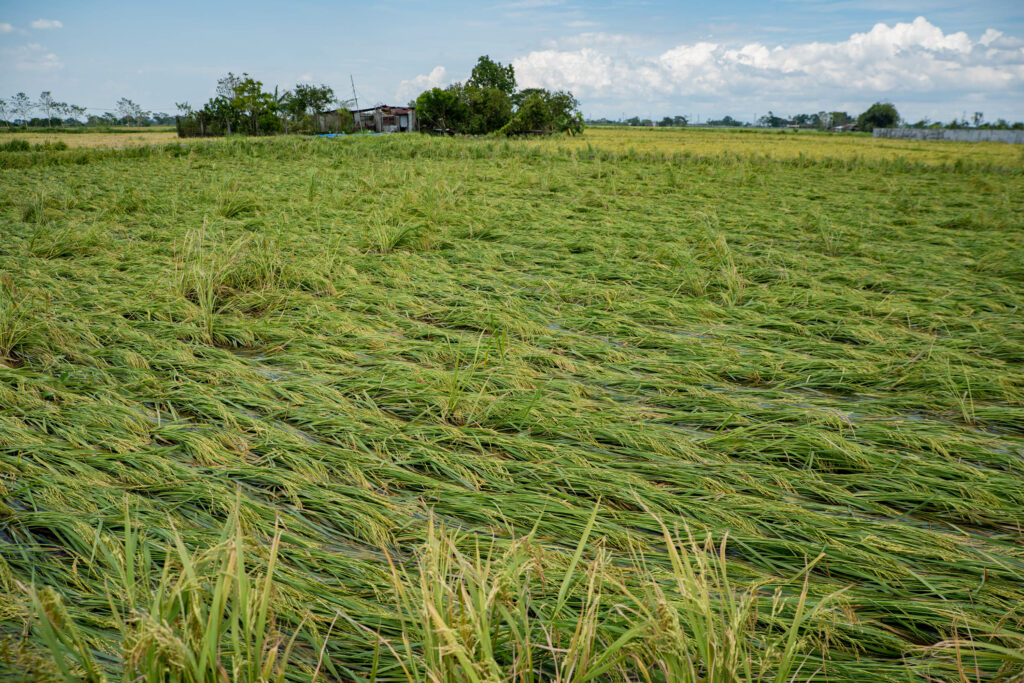 The Department of Agriculture (DA) on September 28 reported P1.97 billion (US$33.4 million) worth of damage in the agriculture sector, which translates to a production loss of 114,446 metric tons.

Rosario Barrera, daughter of one of the ARBs in Hacienda Tinang, couldn’t explain how she felt when she saw her crops submerged in flood the day after the typhoon.

“It was too painful. The storm robbed us of everything, one day before the planned harvest. Now we have nothing but debt,” said the 42-year-old farmer.

She and her siblings lost a production cost of at least P200,000 and three months of waiting for the crops to grow. She said some of the funds they used came from lenders who will expect payment in the coming days.

The agriculture department announced that various forms of assistance were made available for the typhoon-stricken farmers including the distribution of some P170.34 million (US$2.9 million) worth of rice seeds, P23.16 million (US$393,105) worth of corn seeds, and P13.55 million (US$230,000) worth of assorted vegetable seeds.

DA also said affected farmers may avail financial assistance through the Survival and Recovery (SURE) Loan Program from the Agricultural Credit Policy Council (ACPC) with loanable amount of u to P25,000 payable in three years at zero interest.

Several peasant organizations, however, called on the government to distribute a P15,000 (US$254) production subsidy instead of offering loans to farmers.

“The distribution production subsidy for farmers and fisherfolk affected by the typhoon is legitimate and urgent,” said Zenaida Soriano, chairperson of Amihan National Federation of Peasant Women.

Soriano said Filipino farmers spend so much each cropping season, adding that if they can harvest anything after the devastation of the typhoon, “the price is very cheap.”

“If our government does not act immediately, the farmers will fall further in debt,” she said.

Soriano said the excess tariffs collected for the Rice Competitiveness Enhancement Fund (RCEF) in 2021 amounting to P8.9 billion (US$151 million) “could be used as an emergency financial assistance for rice farmers.”

“It could benefit 593,000 farmers,” said Soriano, urging President Ferdinand Marcos Jr., who is also the agriculture secretary, to “make concrete and significant actions to mitigate the impact of climate change.”

Aside from the damaged crop, Barrera’s main problem is that they need to pay the rent for the land they used to plant rice.

“It could have been a lot easier if the government already installed my father on his land. We do not need to rent a piece of land,” she said.

ARBs in Hacienda Tinang are still waiting for the Department of Agrarian Reform (DAR) to issue an installation order, which would allow farmers to till the land without any impediment.

On June 20, DAR revalidated the list and reaffirmed that 178 farmers, including 94 members of MAKISAMA-Tinang, are rightful owners of the 200 hectares of land.

DAR made the statement after authorities on June 9 arrested at least 87 people when members of MAKISAMA Tinang conducted collective farming to assert their rights over the land.

Felino Cunanan, chairperson of the peasant group, said a Certificate of Land Ownership Award (CLOA) title for the 200-hectare disputed land has already been awarded to the farmers but for years was kept hidden from them.

“We were not informed that on September 26, 1995, DAR already issued the collective CLOA title under our names,” he said.

In the late 1980s, the Dominican Province of the Philippines Inc. voluntarily offered to sell the 200-hectare to the government through the Department of Agrarian Reform (DAR).

DAR included the land in the Comprehensive Agrarian Reform Program coverage and in 1995, issued a final list of the 236 agrarian reform beneficiaries.

Three years before the list came out, a political clan in Tarlac established the Tinang SN. Multi-purpose Cooperative Inc., which later on, served as the primary administrator of the land.

The farmers only found out the existence of the said CLOA in 2016 when one of the beneficiaries went to the Registry of Deeds.

The farmers filed a formal petition with the DAR to segregate the land and issue individual CLOA to the beneficiaries.

On April 2, 2018, DAR ordered the distribution of the subdivided lots to the farmers.

However, in April 2021, the cooperative filed a petition seeking to nullify and stop the implementation of DAR’s order to distribute the land to individual farmers.

On October 6, the farmers in Tinang will harvest the remaining palay that was spared from the onslaught of Typhoon Karding.

Elizabeth Felix, a member of MAKISMA Tinang, said the harvest will not only allow the farmers put food on the table, but signifies the farmers’ “collective strength against any kind of storm that will try to wreak havoc on us.”

“For as long as it takes, we will assert our rights over these lands. If they try to tear us down, we will rebuild. Even if our crops are damaged, we will still be here fighting,” she said.

Felix told Altermidya the farmers agreed to continue with their organization “even after we are installed on our respective lands.”

“Because we know that collectively, as a group, no storm can knock us out,” she said.