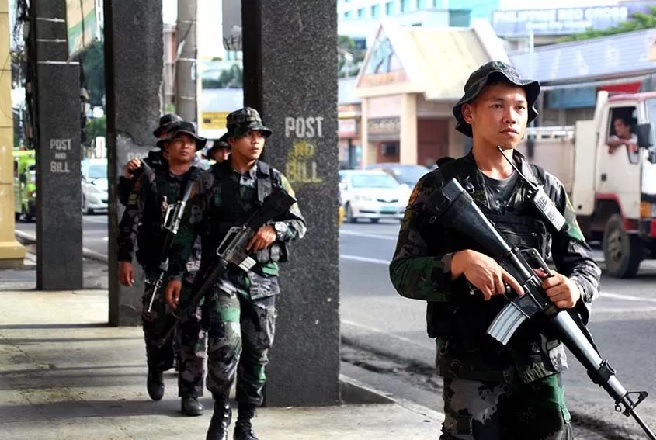 “Based on a narrow pretext, but has a much wider purpose”. This was how the Communist Party of the Philippines (CPP) described President Rodrigo Duterte’s declaration of military rule in Mindanao following armed encounters between the Philippine Army and Maute Group.

In a statement, the CPP said that behind the martial law imposition, Duterte is hoping to assert himself within the military ranks and prevent possible coup attempts from certain military officials. This is the same reason the president appointed several military officials in his Cabinet, the group added.

To justify the martial law declaration, the CPP noted that certain “fascists” in the Duterte government seem to make it appear that Marawi City is a “wasteland” under siege. In reality, the Maute group is “a bandit group whose leaders have known links with military officials”, it said.

The CPP also noted that Duterte has gone beyond “threats and theatrics” in declaring military rule in Mindanao. The president has been threatening to impose martial law since October last year, warning critics not to tempt or force him into declaring martial rule.

Now, according to the CPP, Duterte is realizing his plans of establishing himself as a strongman. “He has imposed himself as a military ruler ready to ram through the bureaucracy and trample on civilian processes,” the communist party said.

The wider target apparently includes progressive and revolutionary groups as declared by Defense secretary Delfin Lorenzana. Human rights advocates have warned that this could create the condition for intensified human rights abuses and may have also negative repercussions on the ongoing peace talks.

According to the CPP, Duterte’s martial rule will further encourage the Armed Forces of the Philippines (AFP) in continuing military abuses like extrajudicial killings, abductions, torture, indiscriminate firing, occupation and hamletting of communities, aerial bombings, etc.

“With martial law imposed in Mindanao, the reactionaries will surely be more barefaced in employing military and police forces to suppress the struggles of workers and peasants and other sectors for genuine land reform, higher wages, better living conditions as well as environmental protection against foreign mining operations,” the CPP said.

“Duterte is further isolating his regime from the people,” it warned.

The 48-year-old communist group called on the Filipino public to reject Duterte’s military rule in Mindanao and demand for its immediate lifting. “He can easily come up with more pretexts such as ‘fighting criminality’”, it said, adding that without strong public opposition, Duterte can easily impose martial rule on the entire country.

“In the face of the Duterte regime’s martial law declaration in Mindanao, the necessity of waging revolutionary armed struggle becomes ever clearer,” said the CPP. “The Party calls on the New People’s Army to plan and carry out more tactical offensives across Mindanao and the entire archipelago.”

Earlier, CPP founding chairperson Jose Maria Sison warned that Duterte is “playing with fire” if he continues to toy with martial law and the Filipino people. He stressed that the declaration would certainly have a negative effect on the ongoing peace talks between the government and the National Democratic Front of the Philippines (NDFP).

Sison also warned of the Duterte regime’s plans of expanding the proclamation of military rule to the entire country, saying that Duterte’s martial law in Mindanao is an apparent “trial balloon”.

“It would have the same negative effect if the Government of the Republic of the Philippines (GRP) would use martial law to intimidate and force the NDFP into an interim joint ceasefire agreement ahead of the comprehensive agreement on socio-economic reforms,” the communist leader said.

The Duterte gov’t will pay for its crimes against press freedom and ...