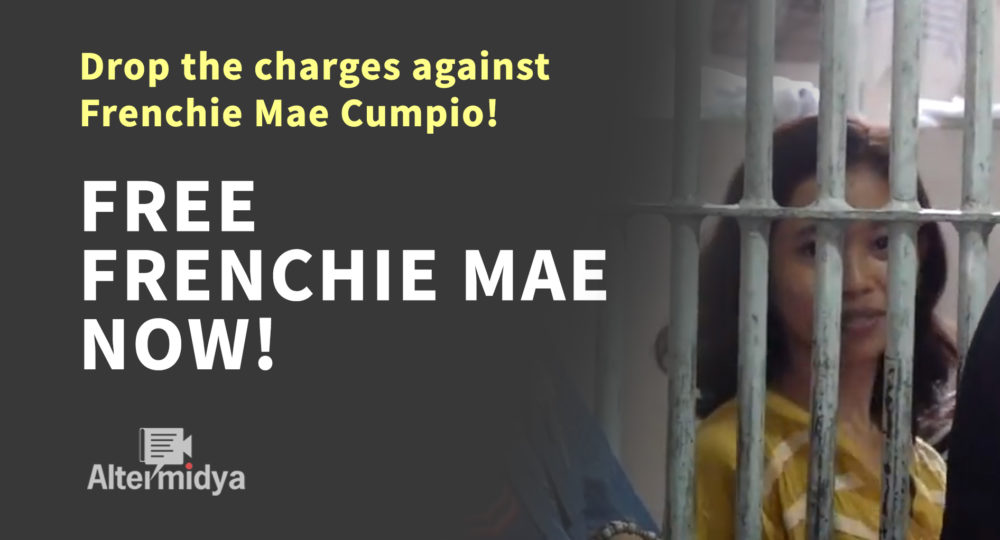 Court hearings for the case of Tacloban-based journalist Frenchie Mae Cumpio resumed this week with the prosecution presenting more witnesses against our colleague.

Many of these witnesses are reportedly the same police officers involved in Frenchie Mae’s arrest. They try to portray Frenchie Mae as someone involved in criminal activities, despite any credible evidence or sound reason.

Frenchie Mae, executive director of Altermidya outfit Eastern Vista and radio anchor at Lingganay han Kamatuoran, has been unjustly detained for more than a year now for trumped-up charges of illegal possession of firearms and explosives.

She had been red-tagged months before her arrest, and was nabbed with the rest of ‘Tacloban 5′ during simultaneous dawn raids in Tacloban City on February 7, 2020. The 8th ID of the Philippine Army was quick to label Frenchie Mae as a high-ranking officer of the Communist Party of the Philippines, a baseless and tired accusation that has been thrown against government critics and human rights defenders.

In fact, Frenchie Mae’s case is unsurprisingly similar to that of newly freed Manila Today editor Lady Ann Salem. Though the arrests happened 10 months apart, both Frenchie Mae and Lady Ann were first subjected to months of surveillance before being nabbed in police operations. These raids were done in the wee hours of the morning, using questionable search warrants. In both instances, high-caliber firearms were planted in the places where the journalists were staying.

In March, the Mandaluyong court ruled a just decision on Lady Ann’s case after Judge Monique Quisumbing-Ignacio dismissed the charges against her. Like in Frenchie Mae’s case, the search warrant used against Lady Ann was found defective and the witnesses’ accounts inconsistent.

We trust that Frenchie Mae’s case would be ruled in the same way — even as the court had earlier denied the motion to quash the warrant and despite the prosecution’s long list of witnesses spouting fabricated stories.

We hope that Frenchie Mae’s case will not drag any longer than it already has. Each day that our colleague spends in jail is a day deprived of justice. Her continued detention is an assault to press freedom and a disservice to the community denied of information that the independent media in Eastern Visayas provides.

Joma says Duterte confessed to being a traitor in latest address