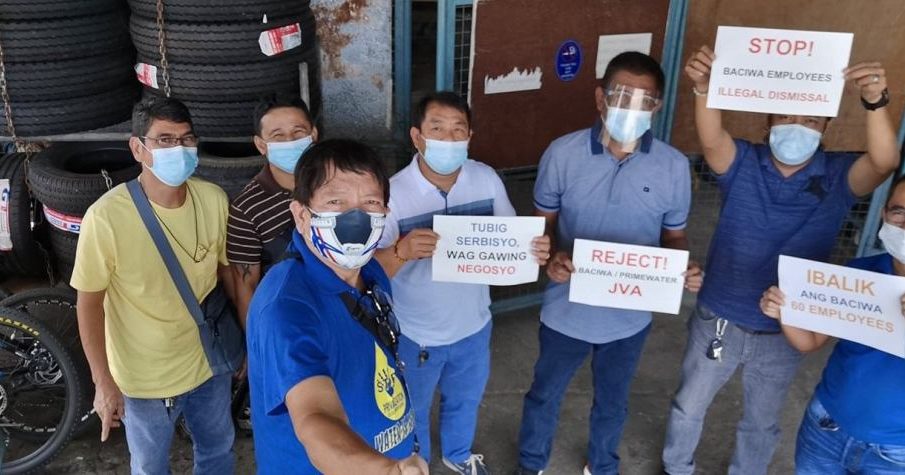 A Bacolod Councilor opposed the termination of 60 employees of the city’s water district, saying the move is a grave abuse of authority by the directors of the local water utility.

In a privileged speech Friday, January 8, Councilor Wilson Gamboa said the Board of Directors of the Bacolod City Water District (BACIWA) unjustly and illegally terminated the workers in collaboration with the private water utility company PrimeWater Infrastruture, Inc.

The local legislator was reacting to the Board’s decision to terminate the workers effective December 31 by declaring their positions “redundant” after the public water utility signed a controversial Joint Venture Agreement (JVA) with PrimeWater.

PrimeWater is owned by the family of Senator Cynthia Villar.

Gamboa said the firing of the employees hammered the final nail of a total “takeover” of BACIWA by PrimeWater.

“These members of the BACIWA Board of Directors believed that they are the absolute authority by issuing arbitrary, capricious, and illegal resolutions and orders which completely gave PrimeWater total supervision and control over its management, operations, collections, and the trampling of employees’ rights. Now, they have evolved as the henchmen of PrimeWater,” Gamboa fumed.

Gamboa said the BACIWA Board could not declare the workers’ positions as redundant when PrimeWater would hire private employees as replacement, including the fired employees who would be “reabsorbed” should they take Option 2 of the proffered retirement package.

The legislator also said the “evil and crooked” BACIWA directors failed to conduct proper consultation with the affected employees.

“[The workers’] rights and tenure must be protected against an unjust, inhuman, and illegal order of the Board of Directors of BACIWA who acted as the corporate carpetbaggers and collaborators of PrimeWater,” Gamboa said.

Employees union president Leny Espina, who was among those dismissed, said the affected workers were barred from entering the BACIWA premises since Monday, January 4.

Espina said the union will protest actions in front of the BACIWA office every day along with other Bacolod City supporters in protest of their dismissal and the takeover of their public water utility.

The Confederation for the Unity, Recognition and Advancement of Government Employees (COURAGE) and the Water System Employees Response (WATER) also launched a nationwide campaign to have the dismissed employees reinstated.

He added that the dismissal was also meant to quell legitimate protests against the privatization of local water services.

“We ask the Duterte government to stop privatization of local water services and put laid off public sector workers back to work!” Dasmariñas said.

“Experience has shown that privatization of water only led to more expensive but still poor, or even poorer, water services. Greed should not reign over the right of the public to affordable and quality water services,” Corcolon said.