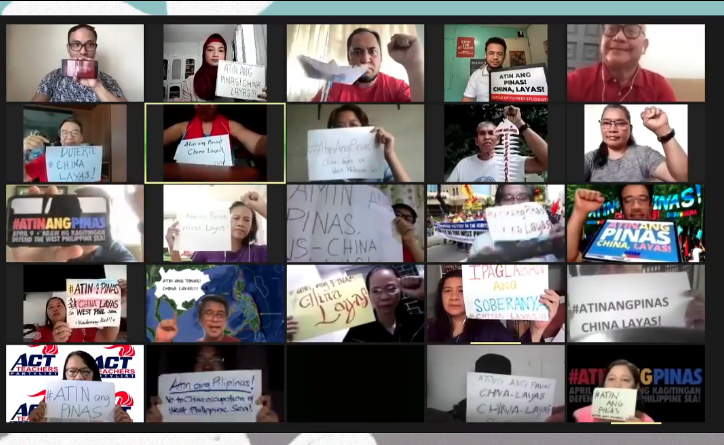 Since March, over a hundred Chinese vessels have been spotted at Julian Felipe (Whitsun) Reef in the latest threat posed by China in the West Philippine Sea. The reef is within the exclusive economic zone of the Philippines.

P1NAS led different organizations and concerned citizens in denouncing China’s continued incursion in the West Philippine Sea, as well as the lack of resolute action by the Philippine government in defending the country’s sovereignty.

The lawyer said that China is stepping on the Philippines’ sovereign rights of the West Philippine Sea and that its presence at Julian Felipe Reef must be condemned for violating our sovereignty in accordance with international law. He added that under international law, no single country can control an entire sea.

Chinese presence in the reef, moreover, runs counter to the 2002 Declaration on the Conduct of Parties in the South China Sea of which China is a signatory.

The said agreement states that parties must “exercise self-restraint in the conduct of activities that would complicate or escalate disputes and affect peace and stability including, among others, refraining from action of inhabiting on the presently uninhabited islands, reefs, shoals, cays, and other features…”

Colmenares said that protests of the Department of Foreign Affairs and other government agencies are useless if President Rodrigo Duterte himself kneels subserviently to China.

P1NAS called on other states adversely affected by Chinese incursions, such as Vietnam, Malaysia, and Brunei, to cooperate with the Philippines in holding joint patrols to uphold sovereignty.

The alliance also called on the international community to support the said countries’ cause, especially by passing a resolution at the United Nations that would order demilitarization in the South China Sea, as well as dismantle any installation or military equipment of China and other countries.

The fisherfolk leader said that it is an insult to our Filipino predecessors to commemorate Araw ng Kagitingan without vigilantly upholding our sovereignty.