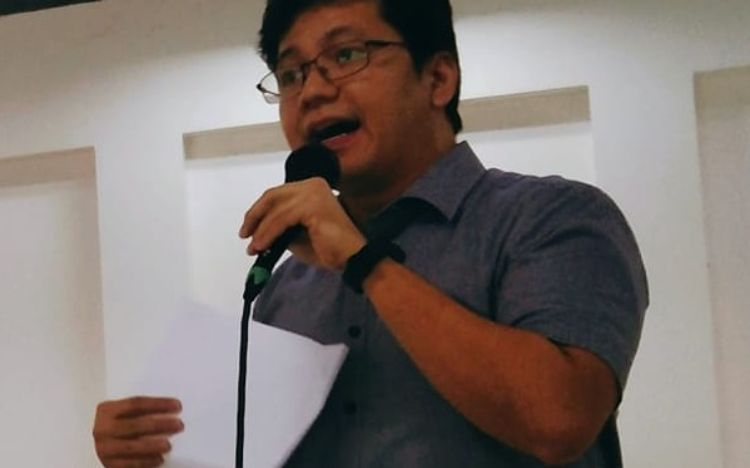 MANILA – Because of the volume of work that he had to finish, human rights lawyer Angelo Karlo Guillen goes home late at night.

That fateful night of March 3, the life of Guillen was shaken as two men wearing ski masks attacked him, stabbing him several times with a screwdriver. He was on his way home after a very long day at work.

Guillen survived the attack and has since returned to work.

As a member of the National Union of People’s Lawyers, he has committed himself to defending the defenseless. The cases he is handling includes that of the 16 Tumanduk farmers who were arrested in Capiz and Iloilo provinces on December 30, 2020. He is also the legal counsel of one of the 37 petitioners against the Anti-Terrorism Act of 2020 in the Supreme Court.

Guillen and lawyers from the NUPL in Panay were repeatedly red-tagged for handling cases of rights violations. They were accused of being “fake peoples’ lawyer” and puppets of the communists group.

Under the Duterte administration, 54 lawyers were killed due to their work. At least nine survived the assassination attempt according to data from the NUPL.

Bulatlat recently talked with Guillen who expressed his fears in doing human rights work and his continued dedication as a true people’s lawyers.

1) How many years have you been practicing as a human rights lawyer? How did it start?

(I have been a human rights lawyer) since I joined the bar in 2014, so, that would be a little over six years.

Both my parents are activists, and they had the most significant influence on me when it came to my appreciation for human rights.

I was a member of NUPL in law school. When I was a student, I attended conferences on human rights and humanitarian law, as well as paralegal and documentation trainings. Neri Colmenares and other veteran human rights lawyers were usually the speakers. So, it gradually transformed from interest to advocacy.

After I passed the bar, my very first task involved drafting pleadings for human rights cases handled by the NUPL’s Panay Chapter.

Along with other paralegals and lawyers, I also participated in humanitarian and peace missions in the rural areas of Panay Island, where civilian communities often report harassment and rights violations by the Philippine Army. We would go there and document these incidents and explain to the communities their civil and political rights, both under domestic and international law.

Human rights missions to far-flung areas were what I relished the most when it came to NUPL work because they offered a chance to understand and witness, first hand, the impact of militarization and government abuse.

Eventually, I graduated to joining QRTs (quick response teams), assisting activists who had been arrested by the police during dispersals, and responding to other incidents of rights violations.

If I recall correctly, I began handling human rights cases as a counsel-of-record sometime in 2015. Since then, I’ve steadily taken on more work as a lawyer for NUPL.

There was not any one particular moment when I decided that I would go into human rights lawyering. My engagement in that particular field was gradual, and the desire to continue doing it developed over a long period of time.

Simply speaking, taking on this advocacy was the outcome of my own experiences accumulated over the years, having seen the frequency and impunity with which rights violations were being committed by the police and the military, and the urgent need for more people, equipped with the necessary training, to give aid to the victims and try to help bring some measure of accountability for these abuses.

2) Aside from rights violation cases, what other cases do you handle?

As a member of NUPL, the cases I’ve handled, or assisted in, involve, almost always, human rights violations. That’s because many communities here – especially in rural areas – are militarized or have become the focus of the government’s counter-insurgency operations. These cases relate to incidents of summary executions, illegal arrest, torture, and threats and intimidation. Our clients are mostly farmers or civilians unable to afford the services of private lawyers.

We also represent and defend activists and members of cause-oriented groups who have been arrested and prosecuted because of their advocacies. These cases involve trumped-up charges brought by the military to harass and secure the arrest of the target individuals.

After Atty. Ben Ramos was assassinated, with incidents of extrajudicial killings and the arrest of human rights defenders surging in Negros Island, NUPL – Panay began to assist in some of the cases there.

We also handled public-interest cases. I was also the counsel in the Boracay closure case. Most recently, I and many of my colleagues in NUPL also act as counsels for different petitioners challenging the Anti-Terrorism Act before the Supreme Court.

On occasion, we also handled labor cases and represented urban poor communities in eviction cases filed by private entities. However, the cases assigned to me have, for the most part, involved human rights violations.

3) Any instances of harassment aside from red-tagging?

I’ve experienced being the subject of surveillance multiple times. This has forced me to relocate repeatedly. When I was attacked last March 3, I was temporarily staying at an apartment because of threats against me and other lawyers and human rights workers here in Panay.

4) Because of the danger that comes with being a peoples’ lawyer, how do you address apprehensions? What keeps you going? What is your inspiration to continue with your work as a peoples lawyer?

Sure, I do experience fear and apprehension in doing this type of work. Frequently, in fact.

Whenever I’m about to join a QRT, or enter a militarized area, or confront any situation wherein I can be arrested or shot, I do think about the possibilities, and they scare me. The incessant red-tagging, mass arrests, summary killings, and recent attacks against rights defenders in Panay, Negros, and other parts of the country serve as a constant reminder that this advocacy comes with considerable perils.

I think that my colleagues and I try our best not to dwell on those fears and, instead, focus on the task at hand. For me, in particular, I also remind myself that whatever fears I have are nothing compared to the hardships experienced by the victims we are there to help. So, we really just have to move forward and do our jobs.

Besides, if all those who are capable of helping HRV victims allowed themselves to be paralyzed by fear, then the impunity with which rights violations are committed in this country would become an insurmountable wall.

As to inspiration, I do not have to go far looking for it. I am constantly surrounded by people – activists, paralegals, and lawyers – who have selflessly devoted their lives to the cause of human rights. I also take immense pride in having known others who actually gave their lives to that cause. I have known Jory Porquia since I was a young boy; and I had the privilege of working with Zara Alvarez in numerous cases. They are but the latest in a long list of martyrs from whom we draw strength and motivation.

When we were arrested May 1 of last year, I shared a cell with another activist – a long-time member of Karapatan, who, incidentally, was the same person who helped convince me to join NUPL. He is a quiet and modest man already in his 60s. From his unassuming demeanor, one would never guess that he was already a veteran human rights defender; that he had survived torture and imprisonment under the Marcos regime; and that he himself had been shot as he witnessed his fellow activists being abducted. Those experiences would have been enough for any man with even the slightest sense of self-preservation to simply give up his advocacy and enjoy a less dangerous, more leisurely life. And yet, there he was, years later, sharing the cell with me. I draw inspiration from him and many others like him – those who, when confronted with great adversities, still find the fortitude to continue acting on their convictions. So long as there are men and women like that in our ranks, then, we will confidently carry on with our work.

5) Any message for those who perpetuate rights violations?

Human rights violations cannot go unpunished or unaccounted. There will eventually come a time when these acts are uncovered and recognized for the crimes that they are. Even if it takes years, the documentation and investigation of rights violations will bear fruit, and the perpetrators identified as such.

This process of accountability – whether in the domestic arena or through mechanisms offered by the international community – will not end despite attacks on human rights workers and attempts by the government to whitewash these horrific events.

Indeed, it is tragic that so many have been victimized; but the perpetrators and the people behind them are sorely mistaken if they think that violence can defeat people’s advocacies. In the long run, impunity simply cannot prevail over demands for justice and accountability.