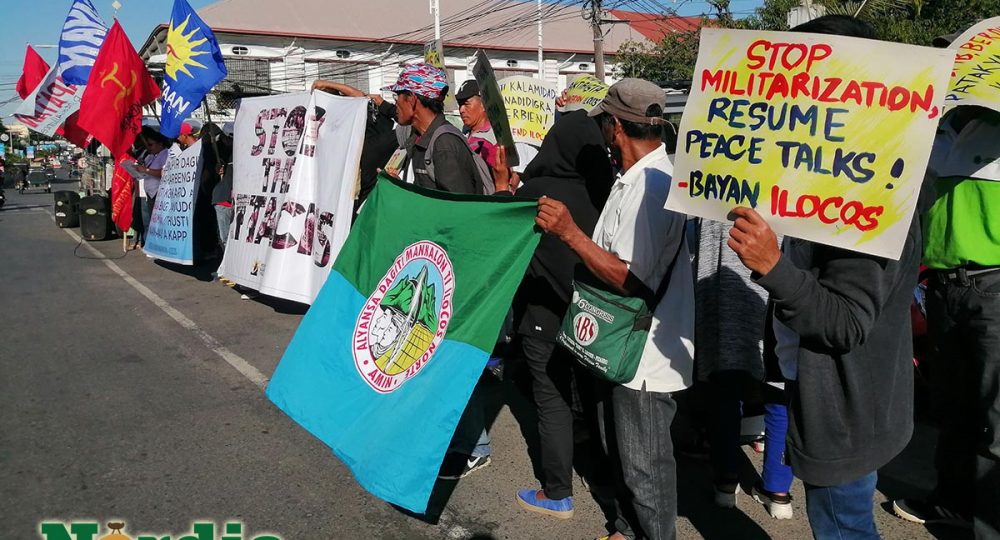 BAGUIO CITY — The Ilocos Human Rights Alliance (IHRA) said the series of harassments perpetrated by the military in January serves as a warning for people to prepare for a more trying year under the Duterte government. The call came following the group’s documentation of “unwanted” visitations and threats against leaders of progressive groups in the Ilocos.

“With the series of red-tagging and unwanted home visits of known activists by the military, there is no doubt that rights violations this year will surpass that of the previous years of the Duterte administration,” IHRA said in the report.

According to the accounts provided by IHRA, five leaders of progressive groups, including IHRA secretary-general Mary Ann Gabayan, experienced harassment and red-tagging by military personnel under the 702nd Brigade of the Philippine Army.

On January 14, Gabayan confronted Staff Sergeant Jomar Agustin and Corporal Jeffrey Gironella from the 81st Infantry Battalion after offering her a job. The work, according to her, was in exchange for any information about the people’s organizations in their municipality. Before this incident, she already observed the two soldiers frequenting their barangay. The two were would usually sit in the covered court across her house in Pias, Salcedo, Ilocos Sur.

“Despite appeals from progressive groups, who have worked with the Ilocos Sur Provincial Government in many programs in the past, Governor Ryan Singson failed to stop the military’s violent rampage against activists and people’s organizations,” IHRA noted.

Meanwhile, Solidarity of Peasants Against Exploitation (Stop Exploitation) chairman Antonino Pugyao also had visits from the military on January 16 and 17. The soldiers from the 69th IB, who are part of the Community Support Program, went to his house in Cacafean, Marcos, Ilocos Norte. The report said the army tried to befriend the peasant leader and asked him about the activities of his organization.

Army personnel also arrived in Namuroc, Vintar, Ilocos Norte, where IHRA chairperson Rev. Jaypee Bulusan is assigned. The local police and the military called a general assembly on January 16. The state forces explained that their presence is to prevent the organizing work of the alleged National Democratic Front of the Philippines organization. Among those tagged as a front organization was ACT Teachers Party-list. The police and military also warned the residents to be wary of organizations organizing farmers and the religious sector.

The military also went to the house of Stop Exploitation secretary-general Zaldy Alfiler in Gulpeng, Pinili, Ilocos Norte. On January 21, two soldiers, accompanied by their barangay captain, visited him and asked him about his organization. He declined but offered to talk with them the following day in the village hall with local officials. The next morning, 2nd Civil-Military Operations chief Capt. Rogelio Domrique, Jr. arrived in the meeting and asked him for a one-on-one talk.

The army official interrogated Alfiler about Stop Exploitation and his whereabouts. Domrique also showed a copy of their 2019 Campaign Paper and insinuated that the underground movement directing Stop Exploitation to fight the government.

Alfiler argued that the document is the result of consultation with their members and does not contain anything illegal nor things about overthrowing the government. He also challenged the military to file cases against him if they have proof that he is doing something contrary to law.

IHRA said harassments of progressive leaders in Ilocos Norte intensified after the Provincial Government requested for additional military forces. The request came despite the military’s declaration last year that the province is insurgency-free in 7 years.

According to the group, the military and the provincial government are using President Duterte’s Executive Order 70 to justify deployment in villages where progressive organizations or personalities are present. IHRA said that instead of “community support program,” the police, military, and local governments are implementing “a systematic Campaign to Suppress Progressives.”

“Besides targeting activists, local governments are conniving with the military for this whole-of-nation approach to get funds for projects and allow them to divert precious funds to counter-insurgency undertakings,” noted IHRA.

Meanwhile, in La Union, George Cacayuran, chairperson of Timek ken Namnama ti Mangngalap ti La Union (Timek-La Union), filed a complaint before the Commission on Human Rights Regional Office in San Fernando City on January 27. The case pertains to the harassment he experienced from members of the military.

On January 21, a certain Sgt. Imus and Pfc. Taposas went to look for him in his house to talk to him about Timek-La Union, being a “mainit na organisasyon.” The soldiers went on to ask him about his affiliation with Stop Exploitation and their activities.

Sgt. Imus returned on January 23 at around 3 pm with two soldiers and asked Cacayuran to attend a meeting in their barangay plaza. Before the meeting started, Capt. Domrique arrived with three companions and immediately went to question Cacayuran if Timek-La Union is a registered organization. The army officer also asked him about the individuals who come to their barangay implementing projects and conducting activities with Timek.

During the meeting, the army showed videos allegedly linking Makabayan bloc party-list to the Communist Party of the Philippines.

IHRA also noted that Paola Espiritu, a member of the secretariat of the Ilocos Network for the Environment and correspondent of Northern Dispatch (Nordis), was in the photo. Earlier, in the 1st Quarter Meeting of the Regional Peace and Order Council in Ilocos, the military named her as among the “threats in Region 1” together with Alfiler, Pugyao, and Gabayan.

Cacayuran noticed that the shots were from the December activities in Vigan City, Ilocos Sur, and San Fernando City, La Union. Espiritu was part of the Nordis team assigned to cover the December 10 event in Ilocos Sur and La Union.

“EO 70 militarized the civilian bureaucracy. It is a tool to suppress the people’s clamor for change, targeting activists and the opposition, without the need to openly declaring Martial Law. These incidents are proof of how dangerous and detrimental EO 70 is to the people’s safety and democracy,” IHRA said. # nordis.net