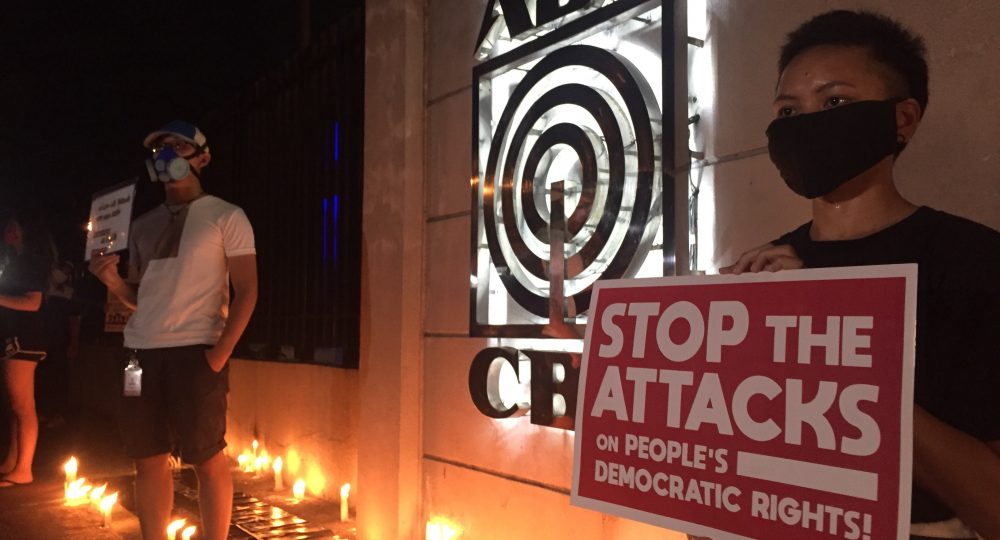 A number of media advocacy, human rights and journalists’ organizations, as well as individual journalists and media practitioners and artists, have denounced the shutdown of television and radio network ABS-CBN as an attack on free expression and press freedom, and have urged the renewal of the franchise.

Even the network’s vast entertainment audience is appalled by the Duterte regime’s shutdown of a network whose programs have become part of the daily lives of millions of Filipinos. ABS-CBN is among the few media institutions in the Philippines responsible for shaping television and film preferences during the many decades of its existence.

Although the network’s influence on mass culture has not always been positive or providential, and its performance as a news provider and interpreter far from perfect, life without Ang Probinsyano and TV Patrol is almost unthinkable for many Filipinos. But some took news of the shut-down with indifference, while still others, primarily those who predictably and blindly approve of what the present regime does without regard for the consequences, even cheered it. They saw it as neither an assault on press freedom and free expression, nor as having any particular relevance to their daily lives.

It might interest the latter to know that despite large numbers of Filipinos’ either refusing to acknowledge it or being totally ignorant of it, the value of press freedom has been acknowledged for centuries even if it is still being debated in these benighted isles.

For example, he was critical of newspapers and on a number of occasions had really harsh words for them, but Thomas Jefferson (1743-1826), the third President of the United States and the principal author of the US Declaration of Independence, nevertheless wrote that if he had to decide between a government without newspapers and newspapers without government, he would not hesitate to choose the latter.

Although he wasn’t always consistent— he was himself a slave owner, but the US Declaration of Independence he authored affirmed that “All men are created equal”— Jefferson valued the role of the free press in preventing government abuse.

He understood its immense contribution to the making of a politically engaged citizenry, without which governments including that of the US can turn into the people’s oppressors. He thus argued that even when the people make mistakes, it is necessary to protect their right and duty to monitor and criticize government, and that newspapers are needed to keep them better informed.

Newspapers have since been joined by radio, television, film and online media. They now constitute the major sources of information on, and interpretation and analysis of events and issues for billions of people. Together they provide the means through which free men and women can hold governments to account and prevent the abuses that Jefferson feared would certainly follow the absence of a free press. Indeed, only some 30 years ago, by reporting what was happening during the Marcos dictatorship the alternative press proved how crucial press freedom is in the making of the informed public needed to combat tyranny.

Some Filipinos understand and appreciate the role of independent journalism in society, and do not need Jefferson or anyone else to remind them of it. But other than the bought-and- paid-for trolls and regime hacks who have made it their business to disparage it, there are still many who honestly think that press freedom has no relevance to their lives, that only journalists benefit from it, and that the shutdown of ABS-CBN has nothing to do with it and is a purely administrative issue.

They are grossly mistaken.

As decision-makers in an agency of the Department of Information and Communications Technology (DICT), which is under the Executive Branch of government, National Telecommunications Commission (NTC) officials were obviously bowing to both their superiors’ and the Solicitor General’s wishes.

The latter had earlier warned the NTC leadership of the supposedly legal consequences of allowing ABS-CBN to continue to operate pending the renewal of its franchise by the House of Representatives, which, however, has been sitting on it for the last three years.

There is also the additional context of the Duterte regime’s sustained attacks since 2016 on other media groups, individual journalists, and their organizations. In addition, Solicitor General Jose Calida also filed a quo warranto complaint against ABS-CBN alleging that it is in violation of the terms of its franchise.

Under these circumstances, in which the existence of a government-orchestrated plot to silence ABS-CBN is as starkly evident as the sun at noon, the NTC cease and desist order is far from being the impartial decision to implement the law its officials claim it to be. It is nothing less than censorship, of which there are at least two forms: prior restraint, and subsequent punishment.

President Rodrigo Duterte has been ranting against ABS-CBN for over two years, accusing it of fraud and bias against him and his regime, and threatening to block the renewal of its franchise. He repeated the threat to see to it that it will be “out” only last November 2019. By December, he was telling the Lopez family to sell the network so its franchise could be renewed.

The inevitable conclusion is that ABS-CBN is being punished for reporting, commenting on, and interpreting events and issues relating to government that Mr. Duterte and his accomplices do not approve of. The NTC order is therefore a form of censorship in the subsequent punishment category.

But it is also a form of prior restraint against the rest of the independent press. It is a warning to other media organizations that if the Duterte regime can shut down ABS-CBN with impunity, the same thing, and perhaps worse, can be done to them. The order is in effect saying that to avoid that fate, every media organization should think twice before it criticizes and dares hold government to account—or even reports truthfully and honestly on what it is doing.

The end result is a constriction in both the quantity and quality of information that reaches the public through the media. Tyranny and bad government thrive on the absence of reliable information, which, it has been said again and again, is vital to the lives of the people in “normal” times. It is even more crucial during and in the aftermath of natural disasters like earthquakes, floods, volcanic eruptions and super typhoons, political and social upheavals, and such emergencies as the current public health crisis brought about by the COVID 19 pandemic.

The availability and quality of information or the lack of it can be a matter of life or death, hence the need for the press to be truly independent so it can provide the daily intelligence, interpretation and analysis the public needs without being censured, insulted, threatened, harassed, and silenced for it.

The shutdown of ABS-CBN is not just an attack on one media organization, but on the entire independent press community, and indirectly, on the people’s fundamental right to the information that will enable them to prevail not only over the present crisis but also future ones.

What the citizenry of this country and the rest of the planet is witnessing is the equivalent of the lockdown that has been imposed on many areas in the Philippines. But rather than to prevent the spread of a virus-borne contagion, it is being used against the people’s right to, and urgent need for the accurate, relevant and timely information that in periods of crisis can save lives.

Prof. Luis V. Teodoro is the national chairperson of the Altermidya Network. This post first appeared in Vantage Point published by BusinessWorld.