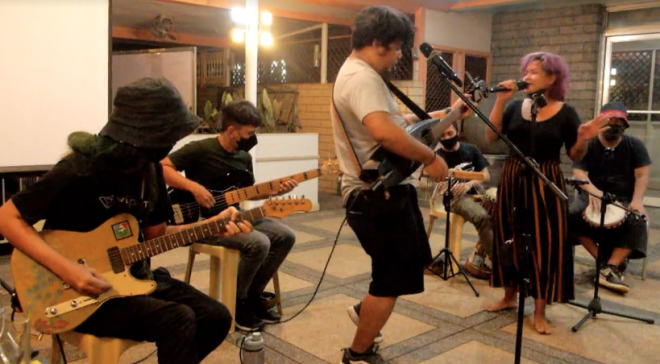 Labor unions and progressive groups gathered at the University Hotel in UP Diliman, Quezon City on June 30 in time for the 32nd birthday of Romina “Sham” Astudillo, one of the seven labor union activists who were arrested on International Human Rights Day last year, to continue pressing for their release.

In the said operations, the seven were arrested even without a warrant for allegedly harboring “illegal possession of firearms and explosives.”

Quezon City Regional Trial Court (RTC) executive judge Cecilyn Burgos-Villavert, who issued the search warrant against the HRDay 7, also issued similar search warrants that led to the separate arrests of 58 activists in Manila and Bacolod in November 2019. They were charged with the same non-bailable crime of illegal possession of firearms and explosives.

During the “Jam for Sham” activity, friends, colleagues, and union leaders recalled who Sham is — her experience as a campus journalist, a youth leader, and eventually a union organizer.

Through songs, short speeches, and various performances, attendees reiterated the call for the immediate release of the HRDay7 and all other political prisoners. The night was punctuated with performances from Pangayaw Music Collective, Sining Laya, BP Combo, Shirebound and Busking, Tubaw, Alfonso Manalastas, Issey Bulan, and Ronnel dela Cruz.

Passion for writing, heart for the masses

Friends and kin shared how Sham, or Mayang as her family calls her, has always been a kind and loving daughter, sister, and aunt.

In college, she served as editor-in-chief of Trinity Observer, the student publication of Trinity University of Asia. “Halimaw siya magsulat,” a colleague quipped at one point.

In her early college years, she once swore that she would not join activists, Sham’s friends shared. In fact, she almost left the progressive publication.

Tudla Productions’ “Sa Ngalan ng Tubo” changed her mind. The documentary, which was about the Hacienda Luisita Massacre convinced her to “[take] a step back from the doors of [their] student publication and [make] a great leap,” her friend recalled.

After leaving college, she served as a full-time activist under the banner of Kabataan Partylist. Eventually, she found her way to labor organizing.

Some of the workers she helped were present in the “Jam for Sham” celebration. Francisco Manaog of Workers Union Harbor Center recalled how Sham guided them in every step in defending their rights. “Siya po ay matiyaga. (She is patient),” he said.

“Kami na inaapi, yinuyurakan ng mga kapitalista, siya ang katuwang namin. (We are oppressed and trampled on by capitalists. She was with us in our struggle),” Unipak worker Norinda Nasinopac added.

Sham spearheaded mobilizations for labor rights, wage increase, and children and women’s rights, among many others. Her sister said her asthma never hindered her in serving the people. However, this comorbidity is a health concern which heightens her friends’ concern over her continued incarceration.

Alren Aure, a Filipino registered nurse, expressed his concern for the health condition of political prisoners in packed prisons amid the ongoing pandemic. “Mas exposed sila sa sakit na hindi naman nila deserve. (They are more exposed to the virus and they don’t deserve it),” he said.

He explained that they should be spending time with their families instead of being arbitrarily detained. With the highest occupancy in the world, Philippine jails are breeding grounds for virus transmission. It exposes vulnerable inmates and political prisoners, like Sham, to extreme conditions.

On May 11, peasant leader Joseph Canlas, 59, died of COVID-19 complications while in jail. Another political prisoner, Maximo Redota, reportedly died of a stroke while in jail last May 9, and he reportedly did not receive medical attention.

Aure dubbed the additional danger poised by the COVID-19 pandemic to political prisoners as the current administration’s “weaponization of the pandemic.”

The situation raises the question: how many more innocent individuals, loving daughters, intelligent students, and genuine leaders will be arbitrarily arrested and even die in jail?

In 2016, Sham wrote, “The people don’t need saviors in spandex or remarkable individuals such as kings and queens. History was not made by people in capes. History was made through the collective action of the oppressed and exploited. The masses create history.”

And that was the message imparted by Sham’s colleagues to cap the night. As people continue campaigning for the release of HRDay7 and all political prisoners, the arbitrary arrests and detention of activists and progressive individuals should not hinder other people from rising up, expressing dissent, and turning the tide of history.