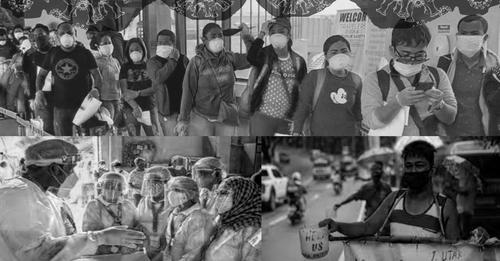 Despite economic managers’ claims, the country’s jobs situation is bleak and far from returning to pre-pandemic levels, said research group IBON. Millions of Filipinos are still struggling to find work or turning more and more to informal jobs and self-employment to survive. The group said that substantial ayuda is urgently needed and that Congress should hold a special session to ensure the immediate allocation and distribution of funds for emergency aid.

IBON said the latest labor force figures show that the 3.7 million unemployed in May 2021 remains higher by 1.3 million than in January 2020 before the pandemic. The 2.2 million increase in employment is not enough to accommodate the additional 3.5 million Filipinos in the labor force, still leaving over a million unemployed. The number of underemployed has only decreased by just 807,000.

The employment increase also hides a significant decline in the quality of work and incomes as the country remains battered by the ongoing health and economic crisis, said the group. Millions of Filipinos are increasingly resorting to informal self-employment to make a living any way they can.

IBON noted that, by class of worker, the number of wage and salary workers declined by 131,000 from January 2020 to May 2021. This is mainly due to the 711,000 drop in those that worked for private establishments, likely from closures and retrenchments in micro, small and medium enterprises (MSMEs).

The number of Filipinos entering informal self-employment and unpaid work is also worsening, the group said. Self-employed work without any paid employees climbed to 12.7 million (1.6 million increase) from 11.1 million in January 2020. Unpaid family workers also rose to 3.6 million (932,000 increase). Employers in own family-operated farms and businesses however dropped to 761,000 (241,000 decrease) from about one million – an indication that small businesses and farms have been unable to cope and are shutting down amid the pandemic crisis.

IBON stressed that the number of employed by hours worked also reveals how bad the informal employment situation has gotten. Those that worked part-time went up by 3.2 million to 16.7 million, while those that worked full-time fell by 1.3 million. Those considered as “with a job, not at work” increased by 273,000 to 606,000.  The increase in part-time workers and those with a job but not at work can also be attributed to the rising number of self-employed and businesses implementing reduced workdays and hours.

More and more Filipino workers are entering sectors that are known to be low-paying and irregular, the group noted. Employment in wholesale and retail trade increased by 1.6 million to 10.2 million and in agriculture by one million to 10.6 million. Economic growth in these two sectors however continued to contract in the first quarter of 2021 – agriculture contracted by 1.2% and trade by 3.9%. This strongly implies lower sectoral incomes made worse by overcrowding.

The rise in part-time employment in these sectors also reflects the irregularity of work, said IBON. The number of part-timers grew by 1.1 million to 3.2 million in trade and by 889,000 to 7.2 million in agriculture.

IBON said that with an increasing number of Filipinos struggling to support themselves amid poor job prospects and falling incomes, substantial aid, subsidies and support are urgently needed. It is time for the government to take immediate steps in providing these and prioritizing the welfare and interests of millions of vulnerable Filipinos. The group said it can start by heeding people’s demand for a special session to ensure the speedy passage of legislation that will ensure the immediate release of funds and distribution of ayuda.