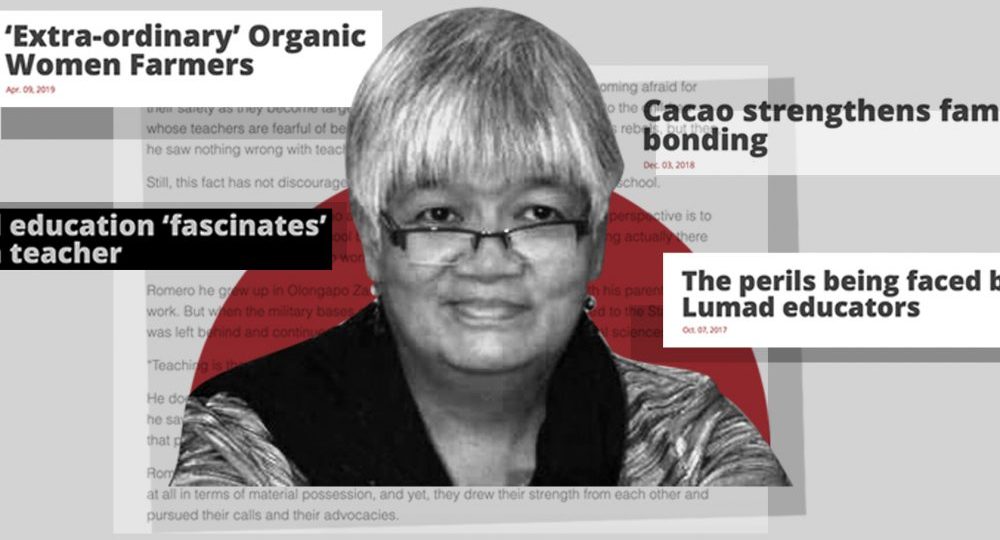 We in the alternative media denounce the unlawful arrest of Margarita Valle, veteran Mindanao-based journalist and a columnist of Davao Today.

Valle was arrested at the Laguindingan airport on June 9 by the Criminal Investigation and Detection Group (CIDG) reportedly based on two arrest warrants dated 2006 and 2011. She was forced to come with the arresting team without counsel and was held incommunicado for eight hours. Later that day, the CIDG released Valle and said that she was mistaken for a suspected member of the Communist Party of the Philippines wanted for arson and multiple murder.

We believe that despite these convenient claims of blunders by the police, Valle’s arrest was a clear case of harassment. The lame excuse of mistaken identity does not mitigate the illegal and preposterous arrest of Valle, and the numerous violations of due process by the CIDG. If anything, the arrest only demonstrates the rampant abuse of power and impunity by state forces in Mindanao, and sends the message that they can take anyone prisoner.

The arrest was a clear attempt to silence journalists like Valle. A former reporter for Media Mindanao News Service and a columnist for outfits such as Sunstar and Davao Today, Valle is also active in research and advocacy work on human rights, indigenous people’s issues, and the environment, among others. Before her arrest, she reportedly attended a training-workshop with the Rural Missionaries of the Philippines, a group recently tagged by the military as a communist “front.”

The attempt to intimidate Valle is not an isolated case in Mindanao under Martial Law and elsewhere in the country. We have not forgotten the harassment against her fellow Mindanao columnists Arnold Alamon and Cong Corrales, who last year both figured in a list that named them as alleged members of the CPP. In Northern Luzon, columnist Sherwin De Vera was also arrested without warrant in 2017 and charged with rebellion. And just last month, Malacanang came out with the notorious matrix that named several Manila-based journalists as alleged destablizers.

All these abuses in Mindanao and the rest of the country are part of calculated attacks by the administration against its perceived critics. We condemn these attempts to intimidate critical media into silence and instil fear among various sectors including human rights defenders. All these are patent acts of tyranny, and we urge our fellow journalists, human rights advocates, and the public to continue resisting these abuses.